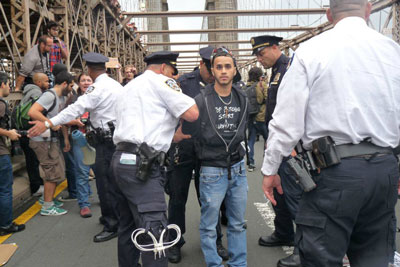 In an opinion issued late today, US District Judge Jed Rakoff ruled that New York Police Department officers are not entitled to qualified immunity from the arrests on the Brooklyn Bridge on October 1, 2011 at the start of the Occupy movement. He has ordered the lawsuit to proceed.

"This is a major victory in the fight for justice and vindication for the seven hundred people falsely arrested by the NYPD," stated Mara Verheyden-Hilliard, Executive Director of the Partnership for Civil Justice Fund which filed the class action lawsuit days after the arrests. "This is a clear message in defense of free speech. The Court's ruling means that scores of NYPD officers are potentially liable to hundreds of arrestees who were mass arrested in a peaceful protest in a blatant violation of their constitutional rights."

"From the onset, this case has involved competing narratives: the police's carefully crafted PR presentation that was spun to the press in the immediate hours after the mass false arrest, vs. the truth," stated Carl Messineo, Legal Director of the PCJF. "The plaintiffs in this lawsuit sought to set the record straight in their demand for justice. The court repeatedly cited the evidence presented in the complaint, including multimedia video evidence, in its finding that NYPD officers can be held liable for conducting these false arrests. We've said all along that the police invited protestors into the bridge and then turned around and, without notice or warning, arrested them. The ruling vindicates and credits that narrative that we have said is the truth all along."

The rulings states:
"[A] reasonable officer would have understood that it was incumbent on the police to clearly warn the demonstrators that they must not proceed onto the Brooklyn Bridge's vehicular roadway...the officers...turned and started walking away from the demonstrators and onto the road way -- an implicit invitation to follow. While the demonstrators might have inferred otherwise if they had heard the bull horn message, no reasonable officer could imagine, in these circumstances, that this warning was heard by more than a small fraction of the gathered multitude...Indeed, the plaintiffs' video shows what should have been obvious to any reasonable officer, namely, that the surrounding clamor interfered with the ability of demonstrators as few as fifteen feet away from the bull horn to understand the officer's instructions."

The ruling opens with the following: "What a huge debt this nation owes to its 'troublemakers.' From Thomas Paine to Martin Luther King, Jr., they have forced us to focus on problems we would plefer to downplay or ignore. Yet it is often only with hindsight that we can distinguish those troublemakers who brought us to our senses from those who were simply . . . troublemakers. Prudence, and respect for the constitutional rights to free speech and free association, therefore dictate that the legal system cut all non-violent protesters a fair amount of slack. These observations are prompted by the instant lawsuit, in which a putative class of some 700 or so 'Occupy Wall Street' protesters contend they were unlawfully arrested while crossing the Brooklyn Bridge on October 1, 2011."

The ruling may be read here.

The class action complaint may be read here.