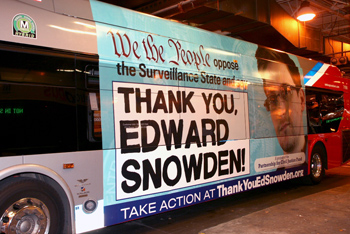 In the last week, the Thank You Ed Snowden bus ad campaign has broken into the mass media, receiving coverage in the Washington Post, the City Paper, Politico, the major D.C. news stations, including ABC7, CBS and FOX, as well as international press outlets.

This shows exactly the type of impact that the Thank You Ed Snowden campaign can have. We want millions of people to know that they too can join the growing movement opposing the NSA's Surveillance State.

The latest shocking revelation from the documents leaked by Mr. Snowden show that the NSA placed malware on more than 50,000 computer networks worldwide. Yes, the NSA, using taxpayers money, infected more than 50,000 computer networks with malicious software designed to steal sensitive information. We are acting now because the government spying agencies are truly out of control.

Because of the outpouring of support this project has already received in anticipation of the D.C. bus ads, we are now planning to extend and expand the advertising campaign. We are contracting for more bus ads for even greater visibility. Can you help?

If you haven't made a donation, please do so right now by following this link. If you've already made a donation and can help again, it will make a big difference.

This is the power of the grassroots: showing what we can do when we come together, use our collective resources and take a stand. If you support this effort, please click this link to make a contribution to allow us to expand our visibility campaign.