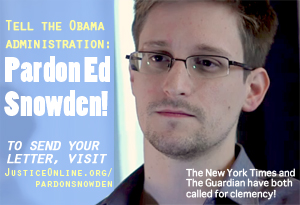 The tide is turning!

Join us and thousands of others by sending an email right now to President Obama and Attorney General Holder demanding that they pardon or drop the charges against whistle-blower Edward Snowden.

Today, the New York Times in a major lead editorial called for President Obama to offer clemency to Mr. Snowden so that he can return home.

The NY Times got it right when they concluded:

“When someone reveals that government officials have routinely and deliberately broken the law, that person should not face life in prison at the hands of the same government.”

Please tell your friends to join this grassroots campaign and let the government know that Mr. Snowden is a whitle-blower and a hero, not a traitor, for courageously igniting a debate about an illegal mass spying program that had been concealed from the public.

Because of the outpouring of support through our crowdfunding efforts we are thrilled to announce that more buses are rolling out this week with the prominent “Thank You Ed Snowden” ads in Washington, D.C.

Please make a donation today to support this work and end the Surveillance State!