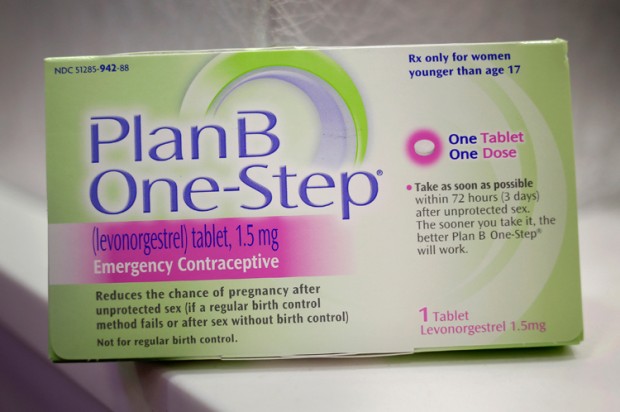 It sounded like a major victory for reproductive health: Per an announcement by the FDA late Tuesday, emergency contraception will finally be available on the shelves for anyone 15 and up. Until now, women under 17 have needed a prescription for the time-sensitive and safe medication, and anyone seeking to buy Plan B had to find an open pharmacy counter. This is unquestionably a move in the right direction.

But there’s a catch. Less than a month ago, the Obama administration was court-ordered to lift the age requirement entirely, by a federal judge calling them out for politicizing the process. There’s no scientific or public health basis for any age limit — the idea is that the morning-after pill be sold just as condoms are — and requiring documentary proof of age presents a hurdle particularly for younger women and the undocumented. Also for no clear reason, Plan B will only be sold in places that have a pharmacy, as opposed to any convenience store, despite the fact that pharmacy employees will no longer be involved except with girls under 15.

The administration has only a couple more days to say whether it will appeal the judge’s decision, but yesterday’s half-measure has women’s health advocates, who have been battling the hyper-politicized regulatory process around the drug since the Bush administration, somewhere between perplexed and furious. The administration chose to respond to a revised petition from Teva, the drug’s manufacturer, but not to the citizen’s petition asking for the lifting of all age requirements, nor to the judge’s decision. “Putting the pieces together, I’m assuming they’re going to appeal,” said Judy Waxman, vice president, health and reproductive rights at the National Women’s Law Center.

“The Obama administration is speaking out of both sides of its mouth when it comes to the basic rights of women and girls as evidenced by the political decision issued by the FDA late today,” said Andrea Costello, the plaintiffs’ attorney in the litigation that resulted in the order to lift the age requirements. “Just last week [to Planned Parenthood], President Obama stated,  ‘When it comes to a woman’s health, no politician should get to decide what’s best for you.’ Yet he is doing exactly that. If the FDA does not comply with this Court’s Order, we will move for contempt.”

Nancy Northup, the president of the Center for Reproductive Rights, which joined in the litigation, said, “These are daunting and sometimes insurmountable hoops women are forced to jump through in time-sensitive circumstances, and we will continue our battle in court to remove these arbitrary restrictions on emergency contraception for all women.”

An FDA spokeswoman told Salon that suddenly accepting the 15-and-up petition from the manufacturer had nothing to do with the administration’s intentions on the litigation. “The FDA’s approval of Teva’s current application for Plan B One-Step is independent of the litigation and this decision is not intended to address the judge’s ruling. DOJ is considering next steps in the litigation. In the meantime, the FDA took independent action to approve the pending application on Plan B One-Step for use without a prescription by women 15 years of age or older.” But if the administration does appeal, it risks drawing attention to the fact-free, politicized process by which it originally overruled the FDA’s recommendation to put Plan B on the shelves, restriction-free, which Judge Edward Korman called in his decision “politically motivated, scientifically unjustified, and contrary to agency precedent.”

At the time, Obama himself added insult to injury by saying, “The reason Kathleen made this decision is that she could not be confident that a 10-year-old or an 11-year-old going to a drugstore should be able — alongside bubble gum or batteries — be able to buy a medication that potentially, if not used properly, could have an adverse effect.”

In his ruling, Judge Korman responded to the president directly: “The invocation of the adverse effect of Plan B on 11-year-olds is an excuse to deprive the overwhelming majority of women of their right to obtain contraceptives without unjustified and burdensome restrictions.” He noted that Plan B is  “among the safest drugs sold over-the-counter.” The drug costs between $35 and $50, a potential barrier to younger people that isn’t expected to change in any case, though obtaining a prescription for it would make it fully covered with no co-pay under the Affordable Care Act’s preventative care rules.

If the administration appeals Korman’s order and somehow prevails on the ID requirement, it will hit both younger teens and immigrants particularly hard. Said Jessica González-Rojas, executive director of the National Latina Institute for Reproductive Health, “Immigrant women and aspiring citizens of all ages have been hit particularly hard, since they are less likely to have government-issued identification. Putting emergency contraception on store shelves is a step in the right direction, but this decision still means another unneeded barrier for many Latinas who need contraception.” And Dr. Jen Gunter, a blogger and gynecologist, pointed out, “You don’t need ID to deliver a baby.”

Politically speaking, the administration doesn’t even have to go on the culture warpath for the rights of 11-year-olds to access emergency contraception — they could simply blame it on the judge’s order. And anyway, the most recent shift has already had groups like the Susan B. Anthony List complaining, “The FDA is recklessly positioning itself as a parent to our children. Unless the 15-and-up move really is just a stop along the way, it risks angering its allies for the sake of an unnecessary compromise. As the writer Lindsay Beyerstein tweeted last night, “The Obama administration wants a ‘middle ground’ on Plan B. They might as well just give out half the dose.”