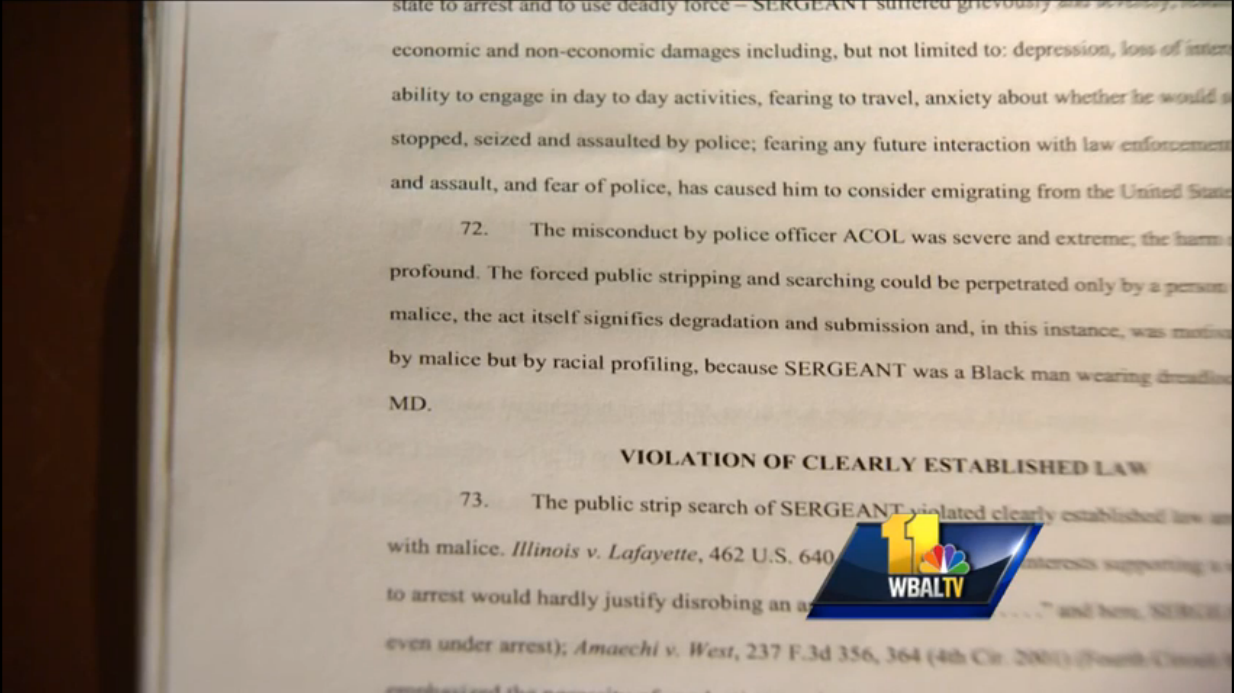 LAUREL, Md. —A Prince George's County man has filed a lawsuit against the city of Laurel, the Laurel Police Department, its chief and two of its officers after the man says he was subjected to an illegal search, seizure and visual strip search in public following a traffic stop.

The suit says Allan Sergeant drove his car from a Sunoco gas station parking lot at 820 Second St. in Laurel a short distance across the street into a CVS parking lot at 15100 Baltimore Ave. in Laurel around 7:30 p.m. on or around March 9, 2014.

The suit also alleges a second officer, referred to in the suit as "John Doe," had "condoned, ratified and supported this manifestly illegal conduct and failed and refused to intervene to stop Officer Acol's illegal, unconstitutional and outrageous conduct."

The suit alleges that Sergeant's rights were infringed upon because he is black and was driving while wearing his hair in dreadlocks.

The suit alleges that Sergeant was stopped and never told why, even though he asked, and he did not consent to a search of his vehicle or his body. When he began to complain following a public frisking and strip search, he was issued a written warning for a municipal violation for "causing vehicle to obstruct other vehicle passing," the suit alleges.

Acol subjected Sergeant to two illegal frisks and searches and when no contraband was found, Sergeant was forced to stand in public where Acol stripped him, the suit alleges.

"Officer Acol pulled Mr. Sergeant's pants and his underwear down to his knees, exposed his genitals and buttocks to public view and subjected him to visual strip search. This terrifying, intrusive, substantial, and unwarranted invasion of privacy was a repulsive act by Laurel Police Officer Acol of profound humiliation and dehumanization. It was carried out by Officer Acol as a signal and means of subjugation without any lawful purpose whatsoever."

The suit alleges that when Sergeant complained of the abuse and wanted to know Acol's identity to file a complaint that he was threatened by both officers with arrest. The suit goes on to say that Acol was not terminated and instead awarded months after the misconduct was reported and that Acol then became the public face of Laurel Police Department's body camera campaign.

The second officer, "John Doe," did not intervene at any point to correct Acol or prevent the incident from happening, the suit alleges.

The suit said that Sergeant filed a complaint with Laurel Police Department on March 10 and was told it would take three months for the investigation to be complete.

The suit said Sergeant was notified by a letter dated June 16, 2014, "that LPD conducted a 'thorough investigation' of the incident and that 'Corporal Barry (one of the investigators) found Officer Acol in violation of the departmental policies and guidelines and found multiple charges sustained for the incident on 03-09-2014. This letter further states, 'Officer Acol received multiple charges and was disciplined for the incident. Mandatory retraining was also a component of the punishment. This incident is now closed.'"

Sergeant suffered severe emotional distress as a result of the March 9, 2014, incident, the suit alleges.

The suit was filed Thursday.

"The City of Laurel has been notified of a lawsuit that was allegedly filed on July 30, 2015 in Federal Court. This lawsuit is based on a traffic stop that was conducted by a Laurel police officer in March 2014.

"As of now, the city has not been served with any paperwork regarding a lawsuit or intent to sue, and we are only aware of the allegations contained in a press release from the attorneys representing the plaintiff in this case.

"The city is restrained from further comment because of the due process afforded to the involved officers as well as the city's personnel policies. However, the city unequivocally denies that the traffic stop, which was initiated by a call about a suspicious vehicle was the result of any racial profiling, or that racism of any type was involved.

"The city of Laurel and the Laurel Police Department also adamantly deny that the victim in this incident was strip searched, and his body exposed to public view by our officers.

An Internal Investigation was conducted and appropriate action was taken, including additional departmental wide training in the area of search and seizure.

"At no time did the Laurel Police Department attempt to imply that there was no wrong doing by the officers.

"The City is confident that as the case moves through the legal system the outrageous claims made by the attorneys in the press release will be shown to be just that -- outrageous."