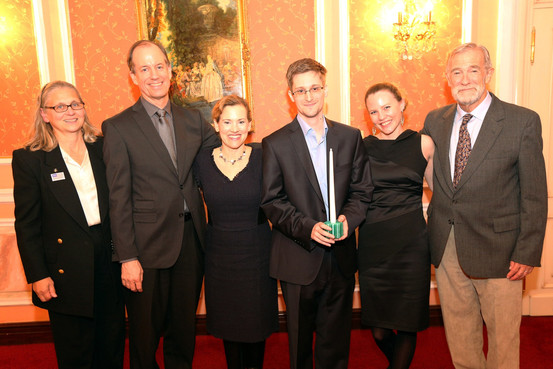 A delegation representing U.S. whistleblowers has just met with Edward Snowden in Russia to show their support for his courageous actions that have exposed the massive U.S. spying program directed against the American people as well as people all over the world.

Former CIA analyst Ray McGovern, pictured above holding a sign that is featured on the ThankYouEdSnowden.org web site, has been a major voice in the U.S. peace movement. He is a strong supporter of the grassroots campaign that is generating support all over the United States. In addition to Mr. McGovern, Pulitzer Prize winning author Alice Walker, former U.S. Attorney General Ramsey Clark and thousands of other people are also members of the ThankYouEdSnowden.org movement.

The government is trying to send Mr. Snowden to prison for the rest of his life for having revealed the existence of an illegal and unconstitutional program that has been secretly collecting and retaining information about phone calls, emails, communications, activities and associations of the people of the United States and the world.

In the coming weeks in Washington D.C., buses will be wrapped with large-size ads with a picture of Mr. Snowden accompanied by the words: Thank You Ed Snowden. The Washington D.C, bus ads will be coinciding with Congressional hearings on the NSA spying program which only came to light because of the revelations of Ed Snowden.

You can, like Ray McGovern, submit your own photo holding a message in support of Ed Snowden by following this link.