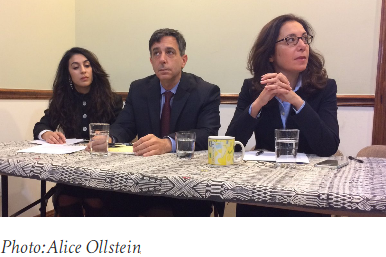 Attorneys from the Partnership for Civil Justice Fund along with activists organizing demonstrations during and after Donald Trump's Inauguration held a press conference this morning demanding access to sites in Washington, D.C., for protests.

At least a dozen groups representing tens of thousands, if not hundreds of thousands of people who plan to come to Washington, D.C., around the Inauguration, including for planned marches on the day after the Inauguration, Saturday, January 21, are being denied permits by federal authorities for key sites in D.C. including the Ellipse, the Lincoln Memorial, Lafayette Park, the National Mall and other locations.

The PCJF has uncovered that the National Park Service has issued a massive, omnibus blocking permit to the Trump Presidential Inaugural Committee authorizing it not only exclusive use of virtually every major assembly site in Washington, D.C., under NPS jurisdiction, but additionally allowing Trump’s PIC to keep those locations from being used by others for weeks before and after the Inauguration.

The PCJF issued a letter today to the NPS demanding that it withdraw its omnibus set-asides as an unconstitutional abridgment of First Amendment rights and allow organizations access to these federal lands under a neutral first-come, first-served permitting system.

PCJF Executive Director, constitutional rights lawyer Mara Verheyden-Hilliard stated: "We are faced with the extraordinary and unconstitutional situation where Trump’s private partisan Inaugural Committee is being allowed to decide where or even if demonstrators will be allowed to protest the Trump agenda on federal land in the nation’s capital.” She continued, “However, for all of those who are concerned, who are thinking about changing their plans - because that is the unconstitutional effect of what the Park Service and Trump's inaugural committee are doing -- we're here to say that it is lawful and safe to peacefully march in Washington D.C., and we welcome everyone to the District of Columbia to engage in their free speech rights."

Carl Messineo, Legal Director of the PCJF, stated, "On the first full day of the Trump Administration, people are coming from all over the country to stand together and articulate their vision of a better future. We are committed to defending the First Amendment rights that belong to the people to engage in free speech and assembly at this critical moment.”

The future of free expression under a Trump administration is on the line. PCJF will continue our work to defend the right to assemble before, during and after the inauguration to fight back against racism, misogyny, and stand in defense of immigrant and Muslim communities.