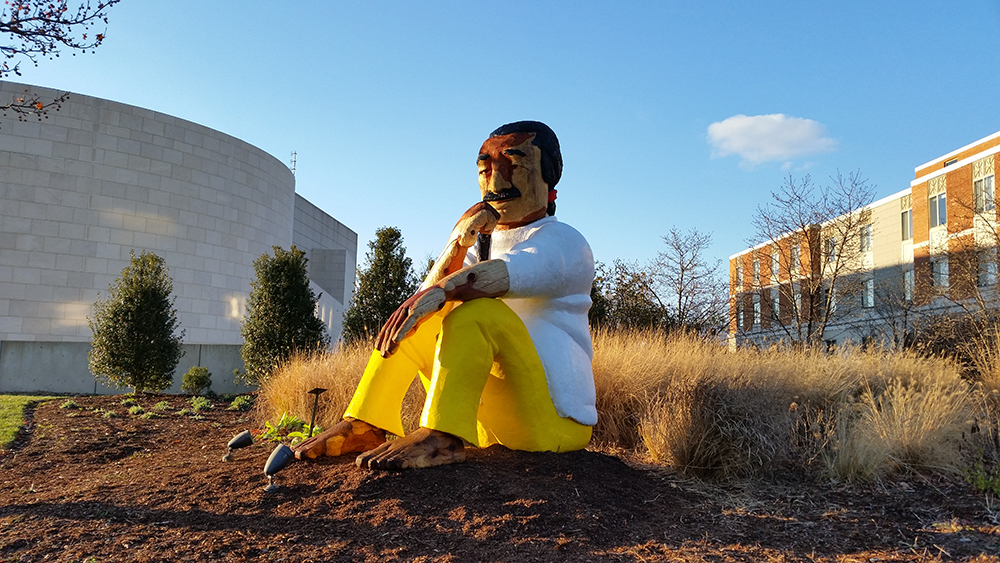 While much coverage has been given to the growing and often volatile opposition on campus to speaking engagement invitations to well known racist and sexist media celebrities, institutional suppression of progressive speech routinely goes without much media notice. The PCJF represents the internationally renowned political artist Rigo23 regarding one such recent case involving American University, in Washington, D.C. After having initially, and admirably, exhibiting Rigo23's statue of longtime political prisoner Leonard Peltier, AU immediately capitulated to the the FBI Agent's Association's demand that the statue be removed, in the process publicly decapitating the statue and extinguishing free expression.

Leonard Peltier, the Native American activist who has been imprisoned for nearly 40 years as a result of what are widely recognized as unfair and corrupted proceedings, had a clemency petition pending at that moment before President Obama and the exhibition was an important contribution to the public discussion of this issue. Mr. Peltier's release has been called for worldwide, from Amnesty International to Nelson Mandela and other Nobel Laureates to human rights leaders throughout the United States. Although the statue had been exhibited for weeks without incident, the moment that the FBIAA demanded the statue's removal by letter ominously warning of the "responsibility to consider the consequence of speech," AU quickly arranged to remove the artwork from public sight.

The University hastily dismembered the statue in a public spectacle, cutting off the head and other body parts without the artist’s direction or oversight as to how to safely remove it. Published images showed the decapitated statue being removed with rope that resembled a hangman's noose above it.

For months afterwards, AU would not tell the artist where the statue was and would not allow inspection to determine damage to the artwork.

As we wrote to AU the morning of its removal: "We hope that American University will not capitulate to these threats against a free society and, especially as an academic institution, have the courage to refuse to extinguish free expression. Removing this political art is an act of blatant censorship under threat and pressure of the FBI association and its supporters. We are entering a new period of American political life with open attacks on fundamental and cherished values of free speech that will require all people and institutions to stand up with courage and conscience, not merely lip service. Presented with the choice of free speech or political censorship, American University is making the public decision as to which side it stands on."

The PCJF has continued to advocate for Rigo23 and artistic and cultural institutions worldwide as well as organizations and individuals concerned about and committed to freedom of expression have weighed in.

NCAC, the National Coalition Against Censorship, stated: “Suppressing an artwork is not a solution to the possibility of confusing the artist’s message with the institution’s message. Indeed the removal of Rigo23’s sculpture goes counter to the very mission of the American University Museum, which is to exhibit ‘political art.’” NACA further stated: “[T]he University has set a bad precedent for working with artists who create political art, and for presenting exhibitions that deal with controversial subject matter.”

The NCAC noted that the “AU administration somewhat incoherently took it upon itself to dismember the sculpture (possibly damaging it in the process) in the name of ensuring its safety” and that “[b]y removing the sculpture AU administrators have pointed to a surefire way for groups and individuals to succeed in suppressing anything they disagree with: just send a threat of violence.” (See http://ncac.org/blog/ncac-responds-to-american-university-museums-removal-of-controversial-sculpture.)

Board members of the International Committee for Museums and Collections of Modern Art, an organization representing nearly 600 curators and arts administrators from 85 countries, wrote a letter to Neil Kerwin, the president of American University, stating that the University’s “arguments to remove the sculpture can only be interpreted as an act of censorship and in breach of the contract with the artist.”

It further wrote, “The museum directors who comprise the board of CiMAM, the affiliated committee of ICOM for Museums and Galleries of Modern and Contemporary Art call on you as president of the American University, to respect the principle of artistic freedom of speech and reinstate the sculpture, allowing it to remain in place until the 30th of April as agreed in the contract with the artist.”