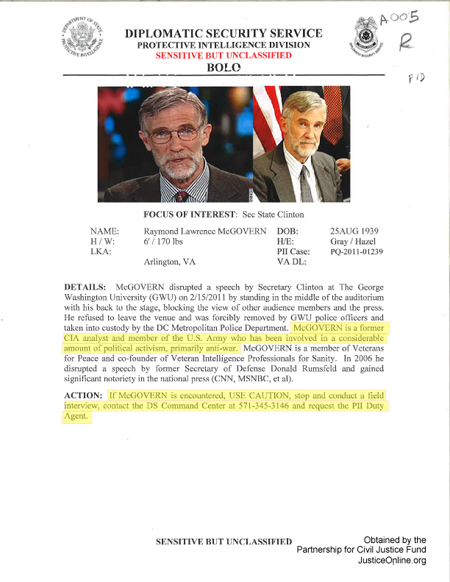 Be On the Look Out Alert' Rescinded; Law Enforcement Instructed that BOLO is 'Not Operational'

The Partnership for Civil Justice Fund is pleased to announce an important victory in the ongoing case of peace activist Ray McGovern, the former CIA analyst, who was brutalized and arrested by officers in 2011 for standing in silent protest during a speech given by then Secretary of State Hillary Clinton.

The PCJF filed a civil rights lawsuit on behalf of Mr. McGovern challenging the arrest and brutality, and seeking an injunction against the State Department related to its issuing a "Be On the Look-Out" ( BOLO) alert against Mr. McGovern which directed agents to stop and question him on sight.

We have obtained the relief sought in the litigation against the Department of State and confirmed that the BOLO alert is now rescinded and that the U.S. State Department has advised other law enforcement that it is non-operational.

The reasons cited for issuing a BOLO alert against Ray included his "political activism, primarily anti-war" — a clearly unconstitutional basis.

Mr. McGovern’s constitutional rights lawsuit against George Washington University and the officers who assaulted and arrested him is still going forward.

The original 2011 incident took place, ironically, at a speech by Clinton where she admonished other governments for repressing free speech. Mr. McGovern stood up and silently turned his back to her, at which point officers rapidly and brutallly removed him from public view, took him to jail, and left him bleeding with bruises and contusions. All charges were subsequently dropped.

The PCJF discovered the unconstitutional BOLO alert issued by the State Department through a Freedom of Information Act demand, and filed a lawsuit, pro bono, on Mr. McGovern’s behalf earlier this year.

A message from Ray McGovern 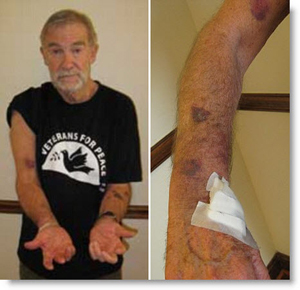 When the Partnership for Civil Justice Fund told me the State Department had issued a secret “Be On the Lookout Alert” against me, I was at first incredulous and then outraged. Thanks to the painstaking work of PCJF, the BOLO Alert has now been exposed, challenged, and rescinded. That's an important victory but just the first step. Litigation continues against George Washington University and the police officers who brutalized and arrested me simply because I engaged in a silent act of dissent while then Secretary of State Hillary Clinton gave a speech about “freedom of expression.”

The PCJF’s experienced lawyers are representing me pro bono, as they do with respect to all of their clients whose rights have been abused by government and police misconduct. So many of us who are engaged defending the First Amendment and the right to dissent depend on the PCJF. I want to urge everyone to support their invaluable work - now in its 20th year - in defense of the Constitution. You can make a tax-deductible contribution today.