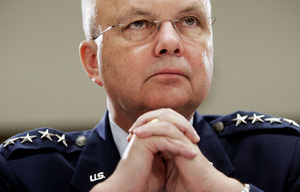 General Michael Hayden, the former Director of the NSA and CIA, in a thinly veiled comment suggested today that whistleblower Ed Snowden should be assassinated by U.S. intelligence agencies.

Snowden is on a short list of candidates for a European Human Rights award.

Hayden told a Washington Post forum: "I'd also thought of nominating Mr. Snowden, but it was for a different list."

Rep. Mike Rogers, the Republican Chairman of the House Intelligence Committee  immediately signaled his support for Gen. Hayden's suggestion that Snowden be put on a U.S. kill list. "I can help you with that," Rogers said.

Gen. Hayden was the Director of the NSA and the architect of George W. Bush's secret domestic spying program. In 2006 he became Bush's CIA Director.

In recent years it has become public knowledge that the U.S. has "kill lists" and the President signs off at weekly sessions on those who will be targetted for assassination.

This is shameful, offensive, and should be condemned by all. Given that the U.S. government arrogates to itself the power to carry out illegal extrajudicial killings, the fact that these officials feel they can so casually boast and threaten to kill a whistleblower makes plain that they are unfit to hold any positions of authority.

We must all stand with courageous Edward Snowden, just as activists with the ThankYouEdSnowden.org campaign did yesterday by protesting during the Senate Judiciary hearing appearance of James Clapper and Keith Alexander. Click here to see the photos from the protest inside the hearing.