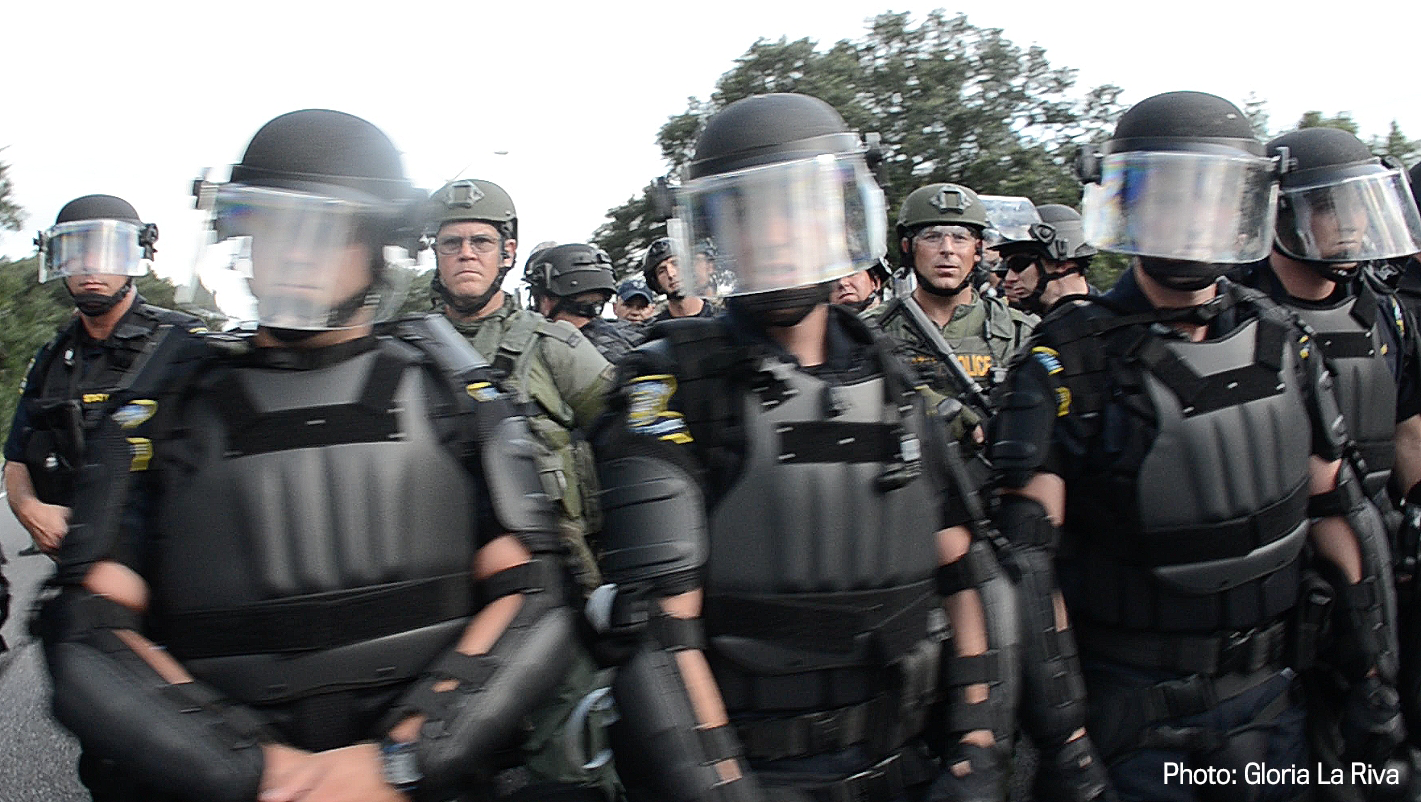 By Mara Verheyden-Hilliard
Executive Director of the PCJF

The events of the past week have placed the country at a decisive moment. Words matter but deeds matter more. Leadership matters. President Obama spoke about the need for real change and new “practices” following the gruesome murders by police officers of Alton Sterling in Baton Rouge, Louisiana, and Philando Castile in Falcon Heights, Minnesota. He followed that by stating last weekend, "One of the great things about America is that individual citizens and groups of citizens can petition their government, can protest, can speak truth to power. And that is sometimes messy and controversial but because of that ability to protest and engage in free speech, America over time has gotten better. We've all benefited from that.”

But the real truth is that federal law enforcement and intelligence agencies, under the Obama administration, are continuing to fuel and encourage a repressive crackdown on peaceful demonstrators exercising their First Amendment rights and moving for social change in America.

Last weekend, Baton Rouge’s African-American community was repeatedly assaulted by the police when they attempted to peacefully protest the killing of Mr. Sterling. The Baton Rouge police were given the green light by President Obama’s FBI to approach this peaceful protest as they would an enemy force. This has been the dangerous pattern of the FBI and other federal law enforcement efforts in the past few years: to suppress social movements in coordination with local police departments.

While the arrests were carried out by local police, federal law enforcement agencies facilitated and laid the groundwork for the anti-free speech crackdown.

The suppression and dispersal of a peaceful protest by Baton Rouge’s African-American community is emblematic of the methods used to extinguish free speech rights of those communities seeking to redress issues of racial and economic inequality.

Here’s what happened and why:

More than 100 peaceful protesters were arrested by police on Saturday. Police repeatedly swept into the crowd like a paramilitary force dressed as robots, giving no audible instructions and snatching people for arrest. More were arrested on Sunday by police who moved in wearing riot gear and plastic face masks, and banged their batons against riot shields in threatening unison.

By 12:00 a.m. on Sunday, July 10, the city was under a virtual lockdown. Businesses closed down early in response to the police actions in the streets. Local law enforcement had clearly received the go-ahead to suppress those in the community who were demanding justice.

The police treated Baton Rouge’s Black community like an “enemy” rather than Americans exercising the cherished rights. President Obama spoke about the right to assemble and redress grievances, but the message that the protestors were the enemy was broadcast by his FBI.

The FBI’s New Orleans Field Office circulated an alert to local law enforcement on July 7 titled “Violence Against Law Enforcement Officers and Riots Planned for 8-10 July 2016.”This document consisted of a few unsourced and inflammatory images that appear to be screen grabs from random social media postings. No such “riots” took place anywhere over the weekend and, despite widely circulating that the peaceful demonstrators were bent on violence, not a single law enforcement entity cited any credible evidence of such a threat or plot. But the bulletin gave local law enforcement — implicitly or explicitly — the green light for repression.

The message of repression is clear: If you rise up and protest against police abuse in Baton Rouge, be prepared to go to jail, be assaulted, have to come up with hundreds of dollars in bail money, find a competent attorney, and then to go through the system and endure the consequences of having a “record” marked by arrest and possible conviction. Many individuals who don’t have the resources end up having to plead out and accept some fine, probation or even jail time.

The PCJF’s Freedom of Information Act (FOIA) investigations carried out over the last five years in particular have shown that the FBI, DHS, Fusion Centers and other federal law enforcement agencies regularly label peaceful protest as terrorist activity, and also concoct “violent” potential scenarios so as to justify the widespread surveillance of and crackdown on the social justice movement and dissenters. Such an abuse of counter-terrorism authority, it should be noted, is accompanied by a wide abuse in counter-terrorism funding, in the form of billions of dollars in agency budgets and private federal contracts.

Relating directly to Louisiana,a PCJF investigation into federal monitoring of the Occupy Wall Street movement discovered that the ATF and U.S. Marshals Service were both actively involved in stimulating an “extremism” scare among local law enforcement. After soliciting 70 State Fusion Centers for information about violence stemming from the Occupy movement, the New Orleans ATF Field Intelligence Group received “overwhelming negative responses.” The agency nonetheless manufactured “several scenarios where escalation to violence could occur.”

A similar PCJF investigation found such conduct from the FBI in its decade-long monitoring of School of the Americas Watch, a human rights organization founded by pacifists aiming to end the U.S. role in the militarization of Latin America. Despite internal FBI reports admitting “the peaceful intentions” of the SOA Watch leaders, the agency justified their work on the basis that “a militant group would infiltrate the protestors and use of the cover of the crowd to create problems.” Yet they admitted that “at this time, there are no specific or known threats to this event.”

The PCJF exposed the role of the FBI in a national operation that involved field offices across the country targeting the peaceful Occupy movement, which was ultimately extinguished in cities and towns across the United States with more than 7,000 arrests.

Now that playbook is being followed with the Black Lives Matter movement. While the Justice Department and President Obama himself have repeatedly spoken of building unity between local police and the Black community, and claim to be in favor of the right to dissent and protest, in practice the FBI — which is under their control — is ratcheting up tensions and laying the groundwork for repression.

The pattern is clear: Federal and local law enforcement target the First Amendment-protected activities of social justice movements because they pose a political threat, not a violent one. Regardless of the fact that the activities of these movements are constitutionally protected, U.S. domestic and federal law enforcement and intelligence agencies operate with a methodology that helps justify repression and a false media presentation. It also contributes to the right-wing and racist smear against the BLM movement amplified by talk radio and politicians.

The people of this country should not allow the Dallas shootings, which local and federal law enforcement all agree were carried out by a ‘deranged’ lone gunman, to be manipulated into an attack on the Black Lives Matter movement.

The PCJF demands that the FBI and other intelligence entities stop treating peaceful protesters as potential violent threats. It is well past time for the Obama administration and Congress to reign in the unchecked abuse of power and authority that lead to the circulation of last weekend’s false bulletin about Black Lives Matter protests. The federal agencies that are carrying out fear-mongering and circulating exaggerated and concocted reports about Black Lives Matter free speech actions are effectively giving a green light for local law enforcement to sweep protests off the streets.

It is not too late for President Obama, in his final months in office, to have his deeds match his words. In his speech last week, he reiterated that “America over time has gotten better” because people have taken to the streets to protest and “speak truth to power.” No one should believe for a second that that this vital tradition of protest is going to stop. On the contrary, it is growing. The question is whether the FBI and other federal government law enforcement agencies are going to use their vast authority and power to set up pretexts justifying one confrontation after another with grassroots movements seeking change. That path will succeed only in intensifying polarization and ever-graver conflicts. Such tactics will not succeed in extinguishing social movements, whose existence is caused by unmet needs, racial and economic disparities, and the absence of justice for so many.

More than 200 were arrested in Baton Rouge over the weekend. The National Lawyers Guild in Louisiana is playing a major role in defending those arrested.