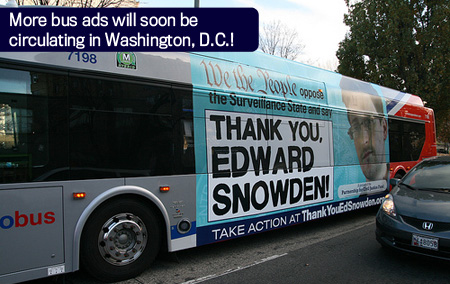 Additional buses bearing the huge "Thank You Ed Snowden, Say No to the Surveillance State" message will be circulating on Jan. 6, the day Congress comes back into session. This was made possible by the crowd-funding support this project has received from across the country.

Every day, people who have seen the first Thank You Ed Snowden bus ads are sending us supportive messages and coming to the ThankYouEdSnowden.org website to send emails to Congress demanding they take action against mass surveillance. The project has received local and international media attention. Imagine the impact and potential of spreading this campaign even wider.

To fully wrap a bus with advertisements costs around $5000. That is out of reach for most people acting alone, but if 100 people can each give $50 in the next few days, we can reach it together. All donations made to the PCJF before the end of the month are tax-deductible for your 2013 taxes.

There are millions of people who oppose the Surveillance State but do not know that there is something they can do to stop it. Acting together, we can change that.

We can make 2014 the year that we reverse the momentum of the ever-expanding Surveillance State. The Obama administration clearly believes that the NSA leaks have become a major political liability for the White House, but we can't afford to leave "reform" in the hands of the very people who constructed this system.

What is needed is a powerful grassroots movement that demands the complete end to the government's bulk collection of people's private data.

Even before the NSA revelations, the PCJF's work exposed the FBI and DHS using "antiterrorism authority" to spy on peaceful protesters.

The PCJF has filed FOIA demands to further bring to light the NSA's illegal domestic spying programs. Recently, we have organized a public advocacy campaign that has generated thousands of letters to Congressional offices calling for an end to mass surveillance programs that target the people of the country and the world.

The last few months of 2013 have seen an explosion of anti-surveillance activity. Help continue that momentum into the New Year by making a tax-deductible donation today.