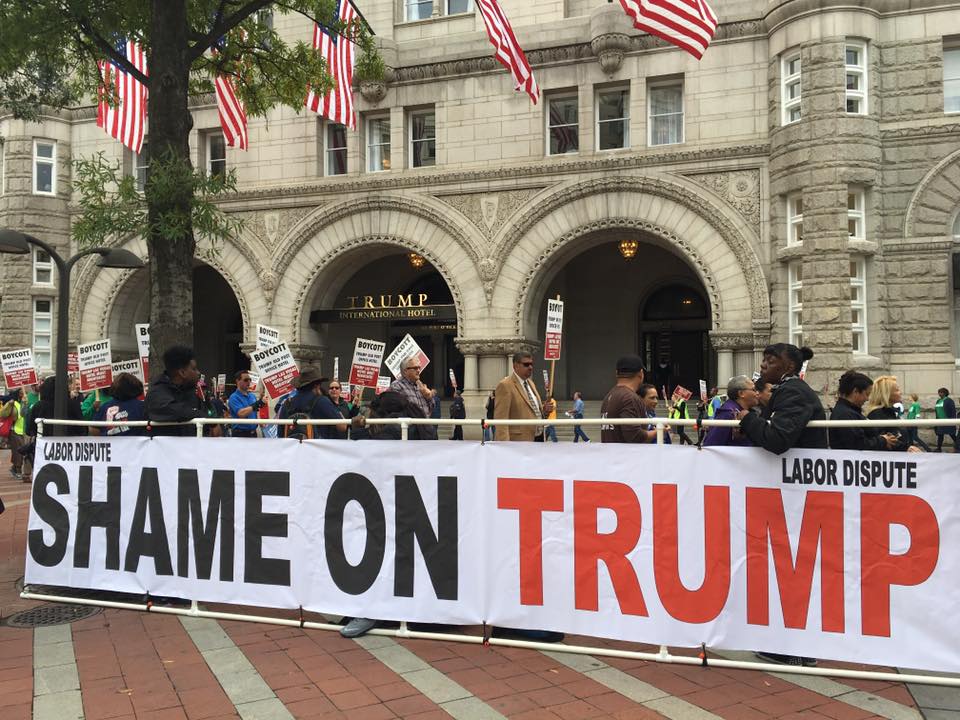 Those wishing to protest on public property along Pennsylvania Avenue near the entrance of Donald Trump’s new hotel are welcome to apply for a permit securing space in front of the $212 million building — a permit that Trump has the power to approve or deny.

Adorned with a statue of Benjamin Franklin, the plaza in front of the hotel, like the building itself, remains owned by the federal government.

But through a series of agreements signed before the real estate mogul announced his run for president, decisions over who can use the plaza space now rest with Trump’s real estate company.

If Trump wins the election, the arrangement would create a remarkable scenario in which the president of the United States could block protests in front of his hotel, just down the street from the White House.

Even without the election as a backdrop, the situation is drawing fierce criticism from free-speech advocates, who say it amounts to the privatization of “America’s Main Street.” The conflict — a largely local one thrust under the bright lights of a bitter presidential election — illustrates the tension between a dogged effort to revive one of the District’s central corridors and the desire to protect Pennsylvania Avenue as a stage for all voices in the nation’s capital.

“The fact is people have the right to be on that sidewalk. They have a right to be in that plaza space. It should not be up to the Trump Organization to determine whether that space is open to the public,” said Mara Verheyden-Hilliard, a lawyer who frequently argues on behalf of First Amendment rights.

The Partnership for Civil Justice Fund, a nonprofit group co-founded by Verheyden-Hilliard, sued a series of government agencies in August for access to agreements made for the Trump hotel.

Some of the agreements have since been released. One, made by the District’s Transportation Department, requires road access to the hotel even during festivals, protests and other events that in the past would be allowed to occupy the entire street.

Permit holders for the street would be required to wall off their events from a lane of traffic providing access to the hotel using plastic barriers and fences, according to official documents.

“Truly Trump is building a wall around his hotel and he is making the American people pay for it,” Verheyden-Hilliard said.

In the meantime, at least one group has staged a protest without the proper permitting.

Carlos Jimenez, executive director of the Metropolitan Washington Council AFL-CIO, said his group filed paperwork with D.C. police so officers would be aware of a planned protest Thursday. The group didn’t receive a permit because of the late notice, but several union members did gather. Jimenez said he was aware that Trump had some rights to the property but was willing to risk it.

“We put in the request, but I don’t know that we even gave them enough time to reply. We’re going to kind of say it’s a sidewalk, and if Trump wants to kick out 200 or 300 people, fine, but we’re not going to risk arrest or do anything like that,” he said.

Several officials said that for the 117-year-old former mail-sorting facility to be put to modern use, connections had to be made between the building and the increasingly cosmopolitan neighborhoods around it. That meant giving the developer the right to control the outdoor space around the hotel.

But some former officials who signed the deal also expressed regret at the implications for free speech.

Most of the sidewalk out front remains under control of the National Park Service, available for public access and permitting. And much of Trump’s rights to the property — such as his leeway to create an outdoor cafe with movable furniture on the plaza — were closely vetted in securing numerous regulatory approvals for the Old Post Office, which his company is leasing from the government for 60 years.

A spokesman for the General Services Administration, which leased the building to the Trump Organization, said in an email that “this whole agreement and how the space was going to be used was part of a completely open and public process.”

A spokeswoman for the National Park Service said “transferring jurisdiction of these areas made sense to both agencies to simplify future management.”

Some of the deals over control of the property, made before Trump launched his presidential campaign, were less transparent.

According to official documents, the Park Service transferred two parcels totaling about one-sixth of an acre to the General Services Administration in January 2014. One includes a wavelike brick-and-granite plaza outside the building, upon which the Ben Franklin statue sits, and the other a path across the sidewalk to the hotel’s driveway.

On rare other occasions, the Park Service has ceded control of its land in public-private partnerships, such as its naming of the nonprofit Trust for the National Mall as an official partner in an effort to rehabilitate the Mall.

Both parcels were then conveyed to the Trump Organization as part of its lease for the Old Post Office, a key component of a renewed effort to bring new life to Pennsylvania Avenue.

The transfers were originally made to ensure the hotel would succeed and take the government off the hook for any associated costs with the property, said Dan Tangherlini, who was GSA administrator at the time of the deals.

“I think innocently in 2014, when GSA asked for jurisdiction over that area, the idea was that the lessor would then take care of maintaining and fixing it,” he said. “At issue now is whether that [control] is going to be used to limit people’s First Amendment access, and that was certainly not the intention.”

“I think people are right to say there should be free and available access to Pennsylvania Avenue,” he added.

The Trump Organization issued a statement saying that the property line “is consistent with how private property that is set back far from the street usually is delineated.”

“One of the GSA’s requirements in the [project] and a goal of our organization was to bring life to Pennsylvania Avenue. The plaza allows us to have the area’s most unique outdoor dining experience that will further enliven the neighborhood,” the statement said.

The D.C. Transportation Department, which controls the street itself, made its own agreement in May 2015 allowing the hotel to keep a traffic lane open during special operations providing for “valet parking service and to provide an accessible area suitable for use as an emergency fire lane.”

A agency spokesman said the allowances weren’t required before the hotel was built because the Old Post Office, then occupied by a food court and government offices, didn’t previously require round-the-clock access. It is also not likely to apply during the inaugural parade.

“The prior use of the property was not residential in nature and vehicle access during Specials Events was not critical to its operations,” the agency said in a statement.

Verheyden-Hilliard said creating such a buffer around the property may amount to an illegal restriction on speech.

“I believe people have the right to be able to protest there because there is a right to pedestrian access, and I don’t believe the Trump Organization can determine that there is a free-speech exclusion zone,” she said.

However Jerome A. Barron, emeritus law professor at George Washington University, who has argued First Amendment cases before the Supreme Court, said there may not be anything illegal about the arrangement.

“I don’t see any constitutional violation,” Barron said. “There are plenty of other places to protest in Washington. And property can be used one way by the government at one time, but there is nothing saying it can’t be used for another purpose such as this.”

Indeed, permitting continues on the sidewalk. The Presidential Inaugural Committee has applied to use it from Dec. 7 to Feb. 10, dates surrounding the planned Jan. 20 inaugural parade.

The advocacy group ANSWER (Act Now to Stop War and End Racism), which joined a protest in front of the hotel during its initial opening Sept. 12, has applied for two permits that would stretch from Election Day on Nov. 8 to Jan. 23, according to the Park Service. Both applications are under consideration.

During the Sept. 12 demonstration, protesters strayed well beyond the sidewalk onto the plaza but Trump Organization security allowed them within about 10 feet of the front door. Eventually the company plans to offer sidewalk dining that, according to its alcohol license application, will include up to 552 seats and a “live band occasionally” but specifies “no nude dancing.”

Barron said such access would undermine advocates’ argument that their free-speech rights were being hampered. “I think that’s fatal to the First Amendment argument,” he said.

“I suppose it’s all a matter of degree,” he added. You couldn’t lease the Mall, I suppose. But a building might be a different story.”