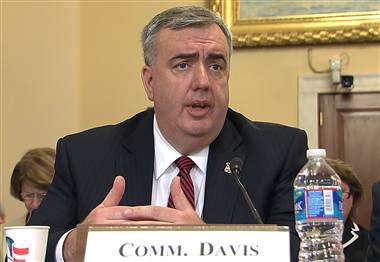 In the fall of 2011, a key Boston police counterterror intelligence unit -- funded with millions of dollars in U.S. homeland security grants -- was closely monitoring anti-Wall Street demonstrations, including tracking the Facebook pages and websites of the protesters and writing reports on the potential impact on "commercial and financial sector assets" in downtown areas, according to internal police documents.

The police monitoring of the activities of Occupy Boston -- an off-shoot of the Occupy Wall Street protests that swept the country in 2011 -- came during a period after the U.S. government received the second of two warnings from the Russian government about the radical Islamic ties of alleged Boston Marathon bomber Tamerlan Tsarnaev.

Boston Police Commissioner Ed Davis told a congressional panel Thursday that his department was never alerted by any federal agency to the information about Tsarnaev, but added that it was "hard to say" whether it would have made any difference in preventing the bombing. FBI  officials have insisted that the intelligence about Tsarnaev was vague and uncorroborated and that their own assessment at the time produced no "derogatory" information that justified opening a full-scale investigation.

But the internal Boston police documents, recently obtained by a civil liberties group, could raise fresh questions about the role of Homeland Security-funded "fusion centers" like the Boston Regional Intelligence Center, or BRIC, which conducted the monitoring. The Boston unit  is one of 72 such units set up to collect, analyze and share intelligence about potential terror threats. While  Homeland Security Secretary Janet Napolitano has called the units “one of the centerpieces” of the nation’s counterterrorism efforts, congressional critics have questioned their effectiveness and accused them in some cases of writing "useless" reports that infringed on civil liberties.

“They  were monitoring completely lawful activities,” said Mara Verheyden-Hilliard, executive director of the Partnership for Civil Justice, a civil liberties group that recently obtained the documents on the BRIC’s monitoring of Occupy Boston under the Freedom of Information Act. She said the BRIC monitoring was an example of the “vast expenditure of government money” to collect intelligence on activities unrelated to terrorism, in violation of First Amendment rights.

A Boston police spokeswoman said the department has changed its reporting procedures since the monitoring of the protests and emphasized that the BRIC is “about a lot more than terrorism.”

A Homeland Security official declined comment, saying the BRIC, like other fusion centers, was “locally owned and operated.” But the official noted that, just five days before the marathon bombing, the BRIC did produce an assessment for the event that, while concluding there was “no specific” or “credible” threat information, advised that “officials should be aware of a range of potential terrorist threats, from scattered unsophisticated attacks to dispersal of chemical or biological agents.” The assessment also identified the marathon finish line — where the bombing took place — as well as Fenway Park as “an area of increased vulnerability.”

The internal police documents about the activities of the BRIC show that on Sept. 30, 2011 — just two days after the second Russian warning about Tsarnaev was sent to the CIA — the Boston police unit was focused on an upcoming “Take Back Boston Rally” planned for the city’s Dewey Square.

A follow-up report, three days days later, tracked the number of protesters, noting that “the size of the camp in Dewey Square has steadily grown over the weekend” and that “according to the group’s website” the demonstrators were planning two marches, including one to a “local media station, very likely to be Fox News Boston on Beacon Hill.”

Verheyden-Hilliard, whose group obtained the documents, said it was not surprising that the BRIC would be reporting such information since later documents appear to show Homeland Security officials requesting such data. In one “Daily Intelligence Briefing,” dated Oct. 21, 2011, the “Threat Management Division” of Homeland Security’s Federal Protective Service outlines a “template for creating the daily intelligence brief for your region” and then cites a “list of events we want to request” that officials submit “for daily briefing information.” Among the categories, in addition to reporting on domestic terrorist acts and “significant criminal activity” is one called “Peaceful Activist Demonstrations.”

In his testimony Thursday, Commissioner Davis acknowledged to a House committee that his department, which runs the BRIC, was never provided any of the intelligence from the FBI and CIA that Tsarnaev, a resident of Cambridge, had been twice flagged by the Russians as an Islamic radical with ties to “underground” groups in that country.

Davis acknowledged that police counterterrorism detectives were assigned to an FBI Joint Terrorism Task Force (JTTF) -- a separate unit from the Homeland Security fusion centers that serves as the government's primary investigative arm for probing terror threats. An FBI agent at the Boston JTTF conducted an “assessment” of Tsarnaev in 2011 after the first warning about his ties was sent by Russia’s FSB intelligence service. The assessment found no “derogatory” information about Tsarnaev that justified conducting a formal investigation. Later information about Tsarnaev included a second Russian warning to the CIA on Sept. 28, 2011.

But while Boston police had access to the JTTF’s classified database, Davis said that his own officers assigned to the task force were never  specifically alerted to any the information about Tsarnaev. “They tell me they received no word about that individual prior to the bombing.”

FBI spokesman Jason Pack said Thursday that state and local members of the JTTF are “responsible for maintaining awareness of possible threats” in their areas and could have performed “customized key word searches” of the FBI database that would have yielded the information about Tsarnaev.