by Eliza Newlin Carney
Reprinted from The American Prospect
Oct. 4, 2018 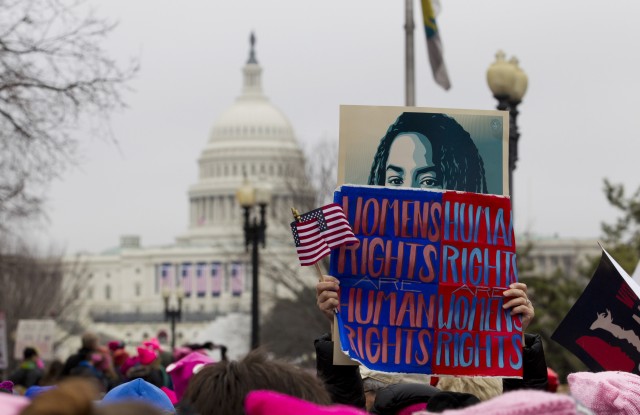 “I think it’s embarrassing for the country to allow protestors,” Trump told The Daily Caller, all but suggesting that such public demonstrations should be illegal.

Trump may soon get his wish, or something like it, if the National Park Service follows through with plans to impose steep fees, waiting periods, and other new restrictions on protesters demonstrating on the National Mall and other public lands in the nation’s capital. The new rules would effectively ban protests in front of the White House, give government officials broad discretion to thwart permits, and force protesters to cover the costs of barricades, fencing, police monitoring, and even damaged grass.

Such costs could run from the tens into the hundreds of thousands of dollars, predicts Mara Verheyden-Hilliard, executive director of the Partnership for Civil Justice Fund (PCFJ), a public interest legal organization that is spearheading a “Save Free Speech” campaign to block what it calls the “pay to protest” plan. PCJF is working with dozens of civil rights, women’s, labor, environmental, and other progressive groups to gin up public comments to the Interior Department, and draw attention to the issue.

PCJF is also preparing for litigation “with the expectation that we will have to move swiftly,” says Verheyden-Hilliard, who argues that the proposed regulations defy numerous federal court orders that have blocked past Park Service attempts to hamstring protesters. The new rules would make it harder for protesters to erect stages, sound systems, and tables, and would make it easier for the Park Service to slow-walk approvals, according to PCJF.

An existing rule, which automatically approves a protest permit if the Park Service doesn’t deny it within 24 hours, would be eliminated.

“When you think about the history of social change in America,” says Verheyden-Hilliard, “being able to march on Washington—to literally petition your government for redress of grievances—is anchored in these iconic locations.”

The Park Service announced its plan to rewrite the rules on August 7, in what it described as a move to “provide clarity to First Amendment demonstrations and special event permit regulations.”

The Park Service approves permits for some 750 “First Amendment demonstrations” and another 1,500 for “special events,” the August 7 announcement states, and demand has been going up: “As the use of these areas increases, the NPS is looking for more efficient ways to serve the public while at the same time protecting the resources that others seek to enjoy.”

Under current rules, the Park Service treats a “special event” such as a concert or a movie shoot, differently from a demonstration, which receives heightened First Amendment protections and is not subject to any charges or costs. But the proposed rules would roll “special events” and demonstrations into the same category. That could force organizers of a demonstration that includes a musical element to pay a fee, warns Verheyden-Hilliard, or invite selective enforcement based on the nature of the protest.

The Park Service invited public comment on its plan, with a deadline of October 15. So far only about 1,000 comments have come in—far fewer than the 100,000 or so public comments that prompted the Interior Department to abandon its unpopular plan to raise peak-season entrance fees from $25 to $70 at more than a dozen national parks. But PCJF has gathered 1,300 signatures on a petition opposing the August 7 plan, and aligned progressive groups are rallying their members to submit comments.

“We see this as part of a broader trend to limit free speech and free expression, and particularly to limit dissent,” says Brandy Doyle, campaign manager at Credo Action, the advocacy arm of Credo Mobile, which describes itself as “America’s only progressive cell phone company.” Credo Action has also gathered close to 70,000 signatures on a petition that calls on Interior Secretary Ryan Zinke not to “tax or limit public protests.”

Trump himself has tangled with the First Amendment on numerous fronts, including his calls for supporters to rough up protesters at his rallies, and his attack on journalists as “the enemies” of the American people. The Trump era has also seen an uptick in new state laws to crack down on public protests, including a rash of “critical infrastructure” bills that impose stiff fines and even prison sentences on protesters who impede pipelines and other public facilities.

Both the new state laws and the National Park Service’s proposed rules have the potential to not only silence, but to punish and even bankrupt individuals and groups that demonstrate publicly, says Verheyden-Hilliard. If the administration implements the Park Service’s plan, she warns, “I believe this will be used as a model for other jurisdictions around the country.”