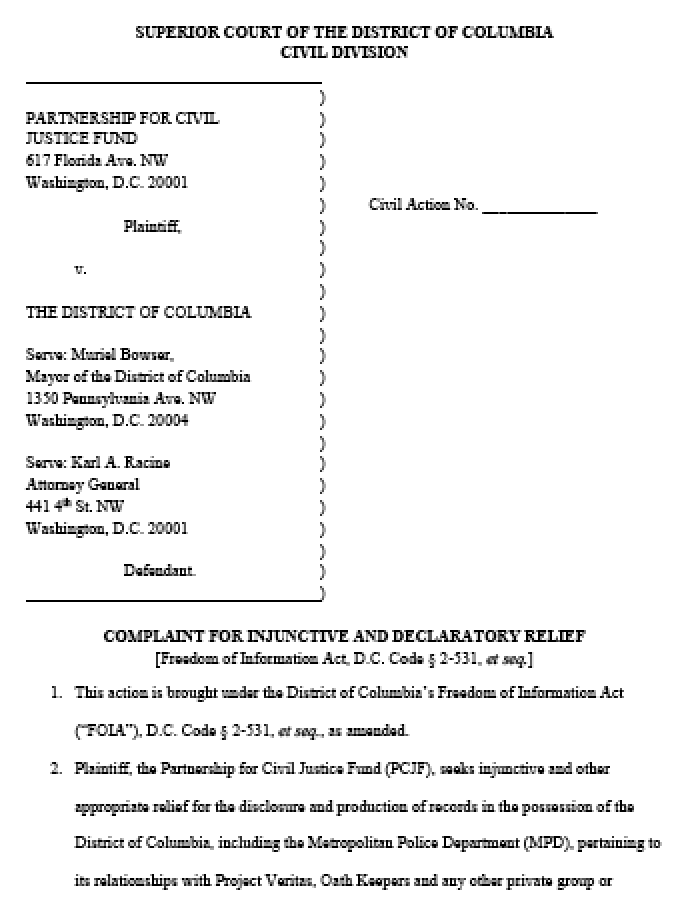 The Partnership for Civil Justice Fund is litigating to obtain disclosure of documents regarding the D.C. Metropolitan Police Department (MPD) and its officers’ relationships with Project Veritas, Oath Keepers and other private groups or persons that have provided or offered to provide information or “intelligence” on their political opponents’ protests or organizing activities.

The lawsuit states that the “D.C. MPD and its officers have worked with and received information from private, politically motivated, right-wing organizations to be used against the political opponents of those organizations,” and seeks public disclosure of the nature and extent of those relationships.

The lawsuit is demanding records that would show “whether the MPD has undertaken actions to illegally skirt its requirements under the law, including through use of proxy forces to engage in infiltration and surveillance that violate” laws restricting D.C. police surveillance and infiltration of political groups.

“Outsourcing illegal surveillance of political organizations doesn’t make it legal. The MPD cannot deputize right wing organizations to function as surveillance agents for the MPD,” stated Mara Verheyden-Hilliard, executive director and constitutional rights attorney with the Partnership for Civil Justice Fund. “When people are engaging in First Amendment protected activities, they should have confidence that the police are not functioning in collaboration with their political opponents. The public has a right to know.”

These laws were enacted by the D.C. Council after investigation into wrongful activities of the MPD that were exposed by the PCJF, including the MPD’s unlawful practice of sending undercover infiltrator officers into protest groups on long term assignments posing as social justice demonstrators, as well as officers engaging in agent provocateur activities seeking to incite violence. See Chairperson Kathy Patterson, Report on Investigation of the Metropolitan Police Department’s Policy and Practice in Handling Demonstrations in the District of Columbia, D.C. Council Committee on the Judiciary, March 11, 2004.

"Given the MPD's history of police misconduct against political activists and protesters, and what appears to be an attempt to reach around restrictions imposed on it by the Council, it is high time that the MPD stop its stonewalling of this request," stated Carl Messineo, Legal Director of the PCJF.

“The issue of relationships between police departments and political opponents of a social justice movement is also of significant public concern due to the threat it poses to fundamental political rights, including free speech and assembly, as well as raising questions regarding whether police authority is being abused in service to a particular viewpoint. See, e.g., Sam Levin, California police worked with neo-Nazis to pursue 'anti-racist' activists, documents show, The Guardian, Feb. 9, 2018. (“Officers expressed sympathy with white supremacists and sought their help to target counter-protesters after a violent 2016 rally, according to court documents.”)

“The Partnership for Civil Justice Fund has sought the materials subject to this FOIA request in its function as a police watchdog organization. It is essential for the public, and lawmakers who engage in oversight activities, to have insight and analysis into how the MPD uses the infiltration and surveillance services of politically-motivated organizations in support of police actions and prosecutions, even more so where this functions as an outsourcing of intelligence operations prohibited by law to be undertaken by the MPD directly.”

The MPD has failed and refused to provide any responsive information and has refused to respond to the Freedom of Information Act request or subsequent inquiries at all. The records demand was initially issued in November, 2017 directly after the US Attorney’s Office introduced into evidence an edited video provided by the widely discredited right-wing Project Veritas to the MPD, in the unsuccessful prosecution of Trump inauguration protestors. This occurred the same week that Project Veritas was exposed for attempting to plant a false story in the Washington Post, also by use of undercover operatives with false identities and covert recording.