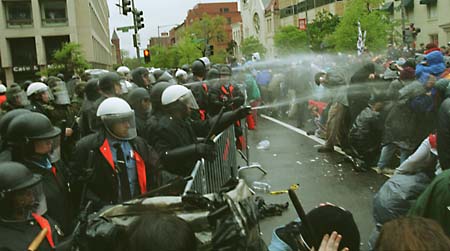 PCJF calls for his removal from presidential task force

The President has placed at the head of his task force on militarized policing Charles Ramsey, an official whose own record is one of overseeing militarized policing, excessive force and mass false arrests, and whose disregard for constitutional rights as Chief of the D.C. MPD was publicly condemned by the Council of the District of Columbia.

"[T]he chief of police of the District of Columbia presents himself as someone who dismisses the importance of safeguarding the Constitutional rights of political activists, fails to recognize the legitimacy of the judicial process, and fails to hold himself accountable for providing information in a legitimate setting." - D.C. Council Judiciary Committee Report on MPD Policy and Practices in Handling Demonstrations, March 2004

"It is evident that Commissioner Ramsey is unfit for any task force with a mandate to evaluate policing practices in America," stated Mara Verheyden-Hilliard, Executive Director of the Partnership for Civil Justice Fund. "Unless, of course, that task force is created solely as window dressing to assuage public outrage in the short term with no intention of accomplishing any meaningful change."

The context for the portion of the report quoted above is as follows:

The mass violations of civil rights under Chief Ramsey's leadership spurred a major investigation by the D.C. legislature, including on the issue of infiltration of political organizations.

The following is taken from the D.C. Council's Committee on the Judiciary "Report on Investigation of the Metropolitan Police Department's Policy and Practice in Handling Demonstrations in the District of Columbia," published March 11, 2004. As part of its report, the D.C. Council's Judiciary Committee excerpted portions of Ramsey's sworn testimony taken in deposition by the PCJF in litigation against the MPD, followed by the Committee's assessment of the then-Chief of the D.C. MPD. The report as a whole is replete with condemnation of Chief Ramsey's MPD and its mass violations of constitutional rights.

"In a November 14, 2003, deposition [testimony], Chief Ramsey repeatedly refused to answer a direct and straightforward question about ensuring that undercover officers do not violate civil rights. With apologies for the repetition, the efforts by the plaintiffs' lawyer, Mara Verheyden-Hilliard, to secure an answer are included here verbatim:

"Q: What safeguards are put in place to make sure that the Constitutional rights of political activists are not violated by the use of intelligence officers infiltrating their organizing meetings and activities?

"A: We're only concerned with any unlawful activities that may be taking place or being planned.

"Q: But what safeguards are put into place with regard to the intelligence operations conducted by the MPD that involve assigning officers to infiltrate political meetings or assemblies?

"A: Our officers are interested only in any unlawful activities that might be taking place or being planned by an individual or a group of individuals. Anything beyond that, we aren't concerned about.

"Public officials are responsible for their actions including providing information concerning the performance of their duties when questions are raised within a legitimate fact-finding setting, whether that setting is a D.C. Council hearing or a court proceeding. In the deposition quoted above, Chief Ramsey failed to meet even minimal standards for responding to legitimate questions. The end result: the chief of police of the District of Columbia presents himself as someone who dismisses the importance of safeguarding the Constitutional rights of political activists, fails to recognize the legitimacy of the judicial process, and fails to hold himself accountable for providing information in a legitimate setting."

Read the PCJF's initial statement calling for the appointment of Charles Ramsey to be rescinded.