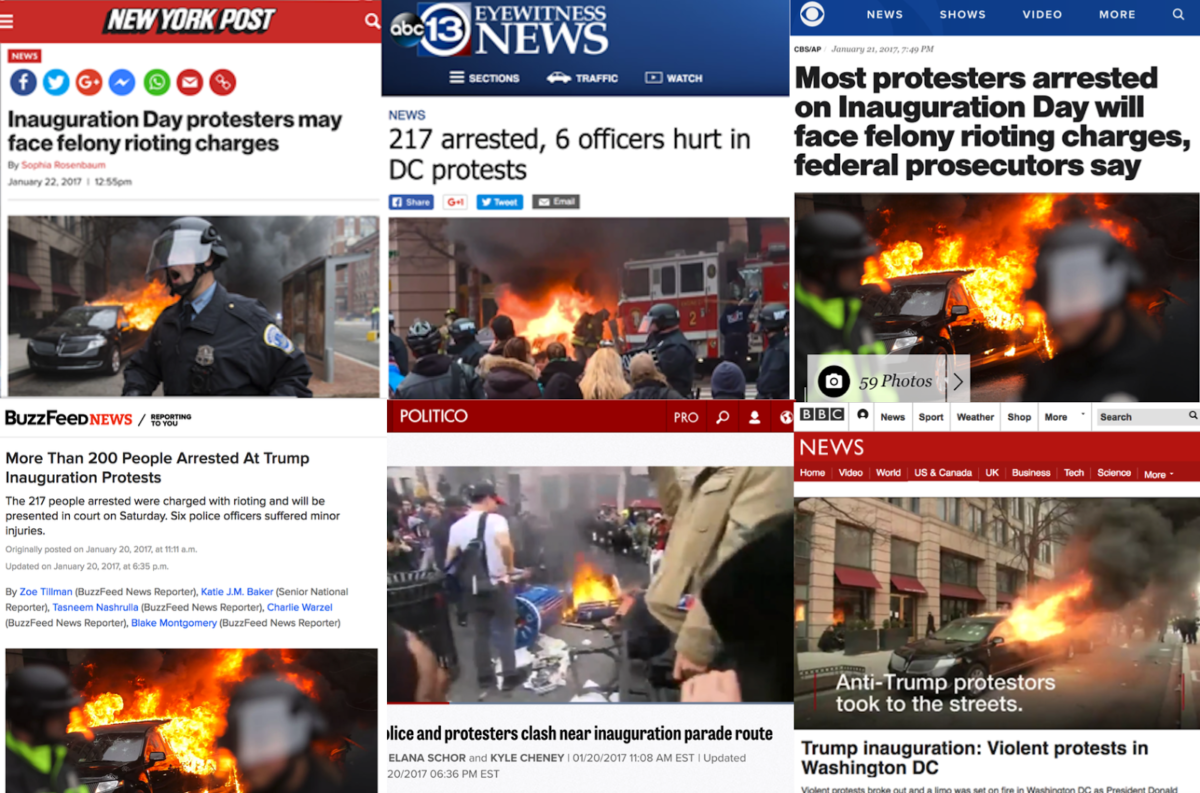 Major media’s relative lack of interest in the mass arrests by Metro DC police on Inauguration Day is a fact noted by activists and journalists since the incident almost six months ago. One way to measure the dearth of coverage is to compare the attention paid to comparable protester arrests in Russia last month.

On June 12, over 1,700 Russians throughout the country were arrested for “unauthorized protests” in opposition to President Vladimir Putin and government corruption. “Dozens”—including opposition leader Alexei Navalny—were kept in jail longer than a day, but the vast majority were let go immediately. (Navalny, as well as some others, got between 15–30 days in jail.)

More than 200 Americans were arrested on January 20 after “rioting” broke out in downtown Washington, DC, in the hours leading up to and after President Donald Trump’s inauguration. Some were let go over the next few weeks, but the bulk of the 200+ still face 10–80 years in federal prison for “felony rioting.”

It’s important to note at least two major differences between the two events: At the Moscow protests, there was no apparent property damage or assaults on police; the protesters’ “crime” was protesting in sections of the city that were not “authorized.” It should be remembered, though, that there’s no public evidence that the vast majority of those arrested in DC—who included journalists, medics and legal observers—had been responsible for any of the vandalism or the objects thrown at police that did occur that day. As Mara Verheyden-Hilliard, executive director of the Partnership for Civil Justice Fund, told FAIR in January (1/31/17):

In their charging papers, [DC prosecutors] are acknowledging that the people that broke the law, that form the basis for their actions against the larger group, are not the people that they then have arrested in the larger group. They even, in some of the charging papers, appear to be holding people who were arrested responsible for actions that occurred after they were in custody, which I don’t believe people have the, you know, time-travel capacity to be doing this. And it really shows the indiscriminate nature of the police arrests.

The other major difference is the penalty faced by those arrested in Moscow and other cities in Russia is far less severe than the 10–80 years in federal prisonfaced by the 200+ awaiting trial in US federal court. For the purposes of comparison, this article assumes these two pieces of context (the lack of “rioting” in Russia vs. the decades-long prison sentences in the US) render these two instances of mass arrests, at the very least, comparable in terms of news value.

Below is the number of stories in various outlets primarily focused on each set of mass arrests in the subsequent month: The ratio is almost 4-to-1, with Reuters and CNN being the outliers. Take those two out, and the ratio is closer to 5-to-2. (You can review the data here.) The Washington Post (1/21/17) cited the presence of medics among protesters as evidence of a plot to “violently disrupt the inauguration.”

Aside from the quantitative difference in coverage, there’s a stark qualitative one as well. Initial reports from the Washington Post (which was excluded from the quantitative comparison, since for the Postit was a local “public safety” story in the metro section) simply ran with the government’s narrative without question: “Protesters Who Destroyed Property on Inauguration Day Were Part of Well-Organized Group” was the headline of its next-day report (1/21/17). How many of the 217 detained were part of this “well-organized group”? The Postdidn’t say, exactly (“scores” is how it chose to define the scope), giving the reader the distinct impression it was all of them.

When it wasn’t repeating government claims unquestioned, the Post was sympathizing with the government’s difficulties in leveling punishment. “Inauguration Day’s Mass Arrests Are Challenging for Prosecutors,” worried the Post (2/4/17). What about the challenges for those facing life-wrecking decades-long prison sentences? Less important.

When Russian protesters were arrested about five months later, the news led the three most prestigious US newspapers’ front pages the following day (6/13/17):

Neither the New York Times or Wall Street Journal carried front-page photos—or even front-page mentions—the day after the DC mass arrests (1/21/17). The Post did mention the local arrests, without a picture, at the bottom of its front page.

Additionally, virtually all the coverage of the Inauguration Day arrests were accompanied by photos of the now-infamous burning limo. The rub is, the limo was burned after those arrested for felony rioting were detained by police. While there was minor damage to the limo before they were rounded up and fenced in, the primary image giving the impression of mass rioting had nothing to do at all with the arrestees. (I was there, and took a photo of an unburned limo after the protesters were detained, minutes before Trump’s swearing in.)

American readers were given the distinct impression, time and again, that those arrested in DC on Inauguration Day were Black Bloc anarchists hell-bent on violence and mayhem—visually linking the arrests to the post-roundup limo arson: To the extent there was coverage, it almost never mentioned that seven journalists were among those jailed by police. In the couple of days after the mass arrests, neither the New York Times, Wall Street Journal, CNN, MSNBC, ABC, CBS  or NBC mentioned that journalists had been detained. While some were subsequently released, others, such as Santa Fe Reporter writer and New Inquiry editor Aaron Cantú, still face significant prison time. (Disclosure: Cantú has written for FAIR.org.) Indeed, charges against Cantú recently increased to up to 75 years in prison—despite the lack of any public evidence that he was doing anything other than covering the protests. In Moscow, protesters are heroes, not trouble-makers.

What they left behind showed the brute force of their adversary: a single black shoe, a snapped pair of glasses, a shiny hair clip.

Thousands of people, many in their teens and twenties, poured into the center of Moscow on Monday to protest against the corruption they say eats away at their livelihoods and future….

One by one, hundreds were picked off by riot police, who dragged and pulled them by their arms and legs, some by their hair. I watched as police sucker-punched gangly adolescents and hit them with batons before tossing them into paddy wagons. The crowds were resilient, hissing and booing at police officers as their fellow protesters were manhandled. Several youths beside me held up a handwritten placard: “Only revolution will defeat corruption.”

Others chanted, “Make Russia free!” The demonstrators waved smartphones and GoPros in the air, trying to capture the injustices.

No harrowing tale of idealists standing up to an oppressive, dystopian state could be found by any #J20 witness or supporter in the opinion section of any major US paper. Those arrested on January 20 were, to the person, violent rioters begging to be taken in; the government they were protesting, justified in pursuing decades-long prison sentences.

There are obvious differences in these mass arrests, in both directions, but the eagerness of US media to disproportionately cover and empathize with those in Russia, while either ignoring or toeing the government’s line when it comes to mass arrests stateside, speaks to the nationalistic blinders at work. Some 200 Americans face decades in federal prison for what amounted to little more than property damage, the most visually potent example of which occurred after everyone charged had already been detained. This would no doubt be a scandal if it took place in another country—especially one deemed an enemy of the US—but here the arrestees are at best overlooked, and at worst uniformly criminalized.