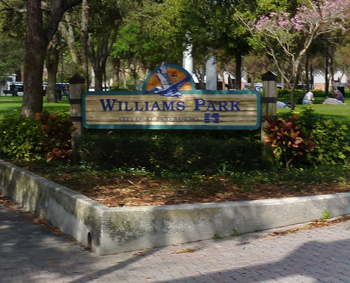 The Partnership for Civil Justice Fund is serving as co-counsel with Southern Legal Counsel challenging unconstitutional restrictions on First Amendment rights imposed by the city of St. Petersburg, Florida.  The Plaintiff in the lawsuit, Rev. Bruce Wright, is an advocate for the homeless who was prevented by effect of a City ordinance from entering Williams Park and exercising his First Amendment rights to engage in outreach and advocacy within the Park.

The City attempted to have the case dismissed, but U.S. District Court Judge Elizabeth A. Kovachevich denied the City’s motion on July 10 and ordered that the constitutional challenge could proceed.

PCJF Executive Director Mara Verheyden-Hilliard commented, "Across the country, local governments and police departments have instituted unconstitutional ordinances restricting access to public parks which are historically the central assembly locations for the people to be able to engage in free speech activities.  This lawsuit is pushing back at that national trend."

In other litigation the PCJF has successfully reversed such measures including its successful challenge to unconstitutional efforts to ban free speech activities on the Great Lawn of Central Park in New York City.