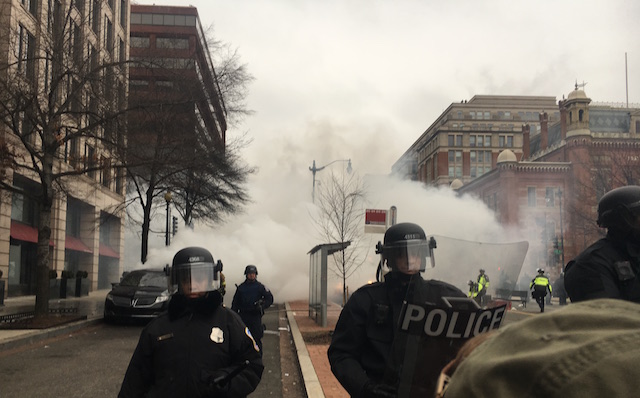 In preparation for the inauguration of Donald Trump, the Metropolitan Police Department spent around $300,000 on equipment like smoke bombs, stinger rounds, rubber baton rounds, and other "less-lethal" munitions, along with gas masks and batons, documents show.

The records were released by the D.C. chapter of the National Lawyers Guild and Defending Rights & Dissent, two groups that have condemned local law enforcement's treatment of protesters on January 20.

Maggie Ellinger-Locke, a lawyer with the National Lawyers Guild, says the documents show "the police anticipated that they would inflict violence against protesters that day. They decided in advance that this level of weaponry was necessary to carry out their duty to protect and to serve."

The $300,000 was part of an estimated $200 million price tag for the 2017 inauguration, which was deemed a National Special Security Event. Most of the spending undertaken by D.C. and surrounding jurisdictions gets reimbursed by the federal government.

MPD has not responded to a request for comment.

D.C. Police Chief Peter Newsham said on that day that police took pains not to arrest people during a number of demonstrations that included blocking security checkpoints. Officers did arrest more than 200 people on Inauguration Day, after a series of clashes between protesters and officers near Franklin Square.

The city allocated $150,000 in the budget for a review of police conduct during Inauguration, after the Office of Police Complaints requested such an investigation.

In its report, the Office of Police Complaints said its monitors observed the indiscriminate use of nonlethal weapons like pepper spray without adequate warning, and the arrests of people who did not commit crimes on Inauguration Day. Many of those arrests occurred after police corralled a large group at 12th and L streets NW. (The burning limo, an image that has become emblematic of downtown destruction on the 20th, did not occur until hours later.)

OPC Executive Diretor Michael Tobin says that the review of MPD conduct is currently underway, and will examine "the amount of ammunition that was expended," among many other things, says Tobin. He declined to say whether the $300,000 was "appropriate," though that is "one of the items that is being reviewed by the independent subject experts."

The National Lawyers Guild and Defending Rights & Dissent submitted FOIA requests to a slew of D.C. government agencies, and received the documents they published from the Office of the Chief Financial Officer.

The documents specifically refer to "equipment needs for Inauguration," list with a price-tag of $301,820. More than half of that, $171,610, went towards 1,000 gas masks. A little under $39,000 was spent on 500 batons, and about $42,000 went to the aforementioned less-lethal munitions, like smoke bombs and stinger rubber ball grenades.

Mara Verheyden-Hilliard, the executive director of the Partnership for Civil Justice Fund, says that, in her experience seeing police communications as part of lawsuits against MPD, "police often seem to use these [National Special Security Events], at least in past years, as an opportunity to requisition all manner of new weapons and gear ... It's a spending spree for them, and they can legitimize it by saying 'The demonstrators are coming to town.'"

MPD denied to provide the requested documents under FOIA, because "the production of such records would interfere with enforcement proceedings. Because this is an ongoing and active investigation, release of this information may give opportunity to witness(es) or suspect(s) to confirm any future testimony to what is learned in the investigative file."

Nearly 200 of the people arrested face more than 70 years in prison for felony rioting and conspiracy to riot charges. The first set of trials begin in November.

At the same time that government prosecutors are continuing to pursue their rioting cases, the ACLU of D.C. is suing MPD for excessive force and unlawful arrests on Inauguration Day.

In response to that lawsuit, MPD said in a statement that its actions were focused on a "group of individuals who chose to engage in criminal acts, destroying property and hurling projectiles, injuring at least six officers."

But Ellinger-Locke, of the National Lawyers Guild, sees it differently. "Let's think about what violence looks like here and who really received a brutal attack on that day," she says. "I think you're going to find that it was demonstrators."