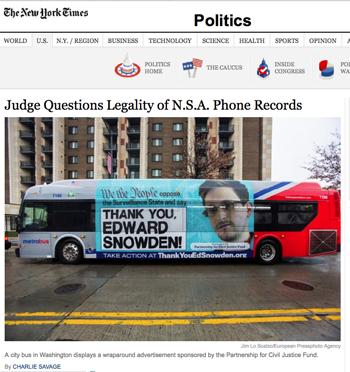 There are cracks in the Surveillance State. Yesterday, Judge Richard J. Leon of the Federal District Court of D.C. ruled that the NSA's bulk collection of data on all Americans' phone calls likely violates the Constitution.

This ruling has been the top story on the New York Times website all day, running with a photo of the PCJF's Thank You Ed Snowden bus ads currently making their way through the streets of Washington, D.C.

This is a major breakthrough for the movement to End the Surveillance State. Make a donation today to help this movement expand its critical work.

The bus ads, which are now being featured in the New York Times, were only made possible because of crowd-funding — all of us doing what we can to bring this campaign to life.

In the few weeks since the campaign launched, the bus ads have been circulating in central D.C. areas including the White House. The overall reach of the campaign is much broader, attracting attention from media and supporters across the country and the globe. Because of the campaign's open defiance against the NSA — thanking instead of demonizing whistleblower Ed Snowden — it has become an iconic expression of opposition to the Surveillance State.

Every week further vindicates whistleblowers like Ed Snowden. The NSA programs that the federal district judge says threaten our collective rights are only known because of such leaks. What more proof do we need that the exposures of the Surveillance State are in the public interest?

Were it not for such whistleblowers, the NSA would be continuing its unconstitutional work in complete secrecy. For years, members of Congress, who have the power to end such programs, gave them their approval in secret committee meetings. Secret judicial orders and FISA "courts" did the same. But now that the Surveillance State has been brought into the public light, for all to see, the people are rejecting it.

In a statement released by Snowden, he said: “Today, a secret program authorized by a secret court was, when exposed to the light of day, found to violate Americans’ rights. ... I acted on my belief that the N.S.A.’s mass surveillance programs would not withstand a constitutional challenge, and that the American public deserved a chance to see these issues determined by open courts.”

We have to keep the pressure on -- make a donation today to help expand the outreach and advertising campaign to End the Surveillance State. Thank you!