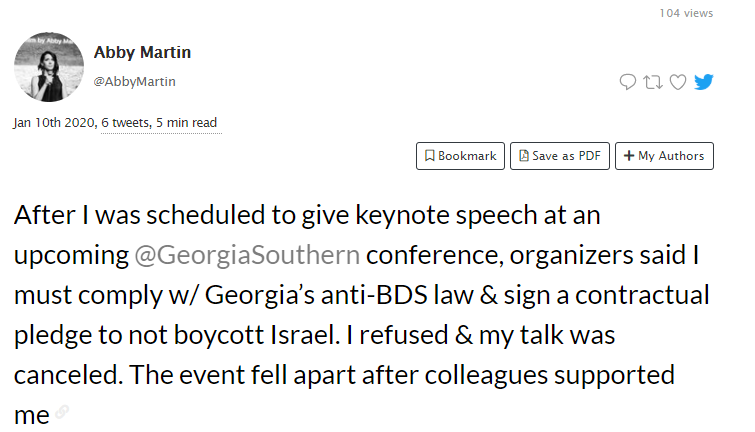 On Monday, February 10, the Partnership for Civil Justice Fund, the Georgia chapter of the Council on American-Islamic Relations (CAIR-Georgia), and CAIR Legal Defense Fund plan to announce the filing of a federal free speech lawsuit against the University System of Georgia, which cancelled a journalist's speaking engagement on a college campus when she refused to sign a state-mandated oath pledging not to boycott the Israeli government.

SEE: Abby Martin Banned From Speaking at US University For Refusing to Sign Pro-Israel Pledge

WHAT: Press Conference on Free Speech Lawsuit Against Georgia's 'Israel Boycott' Law
WHEN: Monday Feb. 10, 12:30 p.m.
WHERE: Atlanta. Journalists may call 404-285-9530 or email info@ga.cair.com for the address of the press conference.
LIVESTREAM: CAIR-Georgia Facebook Page

During the press conference, activist, journalist and filmmaker Abby Martin plans to speak about her experience, while attorneys from CAIR and the Partnership for Civil Justice Fund plan to present details of the federal lawsuit.

"In 1956, Martin Luther King, Jr. was criminalized for leading a boycott against Jim Crow apartheid in Alabama. Southern states enforced anti-boycott laws to punish and derail civil rights organizing. The Supreme Court eventually made clear that peaceful boycotts are a protected form of political speech and expression.

"Nonetheless, filmmaker and journalist Abby Martin has now been barred by Georgia from contracting to speak on campus because she too advocates a boycott against apartheid, this time the apartheid enforced by the government of Israel against the Palestinian people.

"Government directives as to what political views a person may or may not advocate contravene fundamental First Amendment rights, are fatal to a free society and must be struck down."

"By canceling a journalist's speaking engagement on a college campus because she refused to pledge support for a foreign government, the State of Georgia has blatantly violated the First Amendment's guarantee of freedom of speech.

"Every American has the constitutional right to engage in political boycotts, and the State of Georgia does not have the right to punish any American for doing so."

"There is no place where free speech is more important than on campus. And this attempt to suppress Abby's views--denying students, academics, and others from hearing her lecture--is as brazen as it is illegal."

"In adopting this anti-BDS law, Georgia has prioritized the policy preferences of a foreign country over the free speech rights of Americans, like Abby, who speak on this state's college campuses."

In 2016, Governor Nathan Deal signed into law SB 327, which requires any person or company that enters into a contract with the State of Georgia worth $1,000 or more to sign a loyalty oath pledging not engage in political boycotts of the Israeli government based on its treatment of Palestinians.

Similar measures have been enacted in 25 other states as part of an effort to block the growing Boycott, Divestment and Sanctions (BDS) movement. Modeled after the global South African anti-apartheid movement, the BDS movement's stated goal is to pressure the Israeli government to end its occupation of Palestinian territory.

The federal court in Texas held that that the state's anti-boycott law "threatens to suppress unpopular ideas" and "manipulate the public debate" on Israel and Palestine "through coercion rather than persuasion." The Court concluded: "This the First Amendment does not allow."

The Partnership for Civil Justice Fund, based in Washington, D.C., is a public interest legal organization that has litigated on behalf of political organizations and activists across the country to protect and defend First Amendment rights. For more information go to www.JusticeOnline.org.