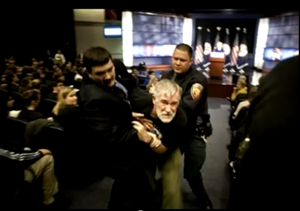 As Secretary of State Hillary Clinton gave her speech at George Washington University yesterday condemning governments that arrest protestors and do not allow free expression, 71-year-old Ray McGovern was grabbed from the audience in plain view of her by police and an unidentified official in plain clothes, brutalized and left bleeding in jail. She never paused speaking. When Secretary Clinton began her speech, Mr. McGovern remained standing silently in the audience and turned his back. Mr. McGovern, a veteran Army officer who also worked as a C.I.A. analyst for 27 years, was wearing a Veterans for Peace t-shirt.

Blind-sided by security officers who pounced upon him, Mr. McGovern remarked, as he was hauled out the door, "So this is America?" Mr. McGovern is covered with bruises, lacerations and contusions inflicted in the assault.

Mr. McGovern is being represented by the Partnership for Civil Justice Fund (PCJF). "It is the ultimate definition of lip service that Secretary of State Clinton would be trumpeting the U.S. government's supposed concerns for free speech rights and this man would be simultaneously brutalized and arrested for engaging in a peaceful act of dissent at her speech," stated attorney Mara Verheyden-Hilliard of the PCJF.

Mr. McGovern now works for Tell the Word, a publishing arm of the ecumenical Church of the Saviour in the Adams Morgan neighborhood of Washington, D.C.