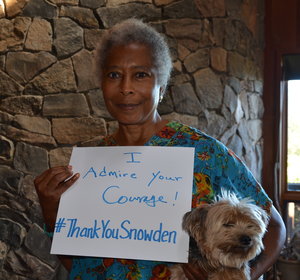 Author Alice Walker has joined the 'Thank You, Ed Snowden' campaign, which has quickly been joined by thousands of people over the last two weeks.

We are on our way to 10,000 signatures and the initiative is taking off to put large "Thank You, Ed Snowden" bus advertisements on the outside of Washington, D.C. buses.

Many people have submitted personal messages and photographs, as Alice Walker has now done along with her partner Kaleo Larson, which have been posted on the Thank You Ed Snowden website and Facebook page.

Ed Snowden's revelations are tearing down the wall shielding illegal government conduct. Last week, the New York Times and The Guardianwrote major pieces based on Snowden's exposures confirming what we long suspected: U.S. and British intelligence have, covertly and/or with the approval of Internet and technology companies, inserted secret vulnerabilities or “back doors” into the encryption software we use every day. That includes popular platforms such as Outlook, Skype, Hotmail, Google, Yahoo, and Facebook, and also the software used to protect our banking transactions and medical records.

Even after the Congress voted down a bill in the 1990s allowing the NSA to insert such "back doors" into our telecommunications, the spy agency went ahead and did it anyway. They spent 10 times more on this operation than on the notorious PRISM program.

We are learning far more about the activities of our government from Ed Snowden than we do from those elected to represent us.

This shows the stakes of the current movement. Standing with Ed Snowden is not just about an individual, but about the future of democracy.

Alice Walker has stood up. You have too. Now let's get our friends and family members to do the same. Show your support for Ed Snowden on social media, sign the petition, make a donation to allow this campaign to secure public advertising, and let's make clear to all the potential whistleblowers of this country and to the White House and Congress that when the whistle-blowers stand up, we will have their backs.