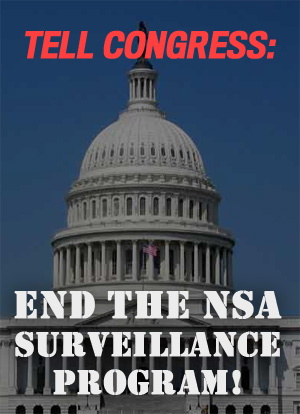 Because of whistleblower Edward Snowden and the nationwide grassroots advocacy campaign by hundreds of thousands of people like you, the House of Representatives has now passed legislation that would defund some of the key mass surveillance mechanisms that Snowden exposed.

This shows that what each of us does can and is making a big difference in changing the political climate in the country.

The legislation passed by the House shows that progress is possible. But it is not enough.We have to keep organizing, fighting and encouraging others to join this effort.

Last week's surprise amendment to the defense spending bill, which passed the House and now awaits action in the Senate, restricts the use of the Foreign Intelligence Surveillance Act against U.S. citizens and eliminates funding for the NSA to coordinate with private software companies "backdoor" entry into their devices and products for the sake of surveillance.

We at the Partnership for Civil Justice Fund urge you to join us in telling Congress to act immediately to eliminate funding for mass surveillance and the Fusion Centers, while building explicit protections for all people against warrantless wiretapping and data collection from all agencies.Nonetheless, these are steps in the right direction, and a significant reversal from the superficial and toothless initial responses from Congress to the initial mass surveillance revelations.

Understanding the legislation and why Congress must go further

According to one interpretation of the House Bill, which only affects funding, agencies other than the NSA and CIA (such as the FBI) could still engage in the same conduct. This is the problem with indirect measures to halt mass surveillance. The government employs an enormous team of legal and technical experts whose task is to push all legal limits, find loopholes and revise key constitutional principles. The people need, in addition to our own organizations to defend privacy and freedom, forthright and unambiguous laws striking down the Surveillance State.

It can be done. The public has for years faced a mountain of lies, redacted documents, and top-secret classifications -- based on vague "War on Terror" national security exceptions -- whenever they demanded the truth about how the government was tracking and monitoring them. Snowden's revelations hit that mountain like a wrecking ball, and as the boulders began to fall, they broke loose an avalanche of lies and exposures that could not help but shake the ground below.

Of course, the mountain is still intact, and the NSA and their political allies are working hard to rebuild it. It will take sustained political action and pressure, as well as new exposés such as the PCJF's report on Fusion Center spying on peaceful protest, to keep chipping away at the mass surveillance system. But after a year in which the political landscape has shifted and the conduct of the country's most secretive and powerful agencies have been dragged into the light, that task no longer seems insurmountable.

The important thing is to not wait for Congress to do the right thing. The movement against mass surveillance must take continual action regardless of what is trending in a given news cycle. Take a moment now, while we have the momentum, to demand Congress go further, and end mass surveillance programs.

Every donation will help continue the work of the PCJF. The public needs its own independent organizations to stop the abuse of power, protect the Constitution and right to dissent, and defend whistleblowers who take action at great personal risk. Please make a donation to support this ongoing effort.