Charges against last 39 people arrested over their alleged involvement in a Trump Inauguration Day rally were dismissed.

The US government has dismissed all charges against the remaining 39 people arrested over their alleged participation in a rally against President Donald Trump's Inauguration Day.

"Upon consideration of the government's motion to dismiss in this case, it is: ORDERED that these cases be dismissed without prejudice," Friday's order by Judge Robert Morin read.

The order came after prosecutors moved to have the remaining charges dropped.

It ends more than a year of trials and similar motions after most of the more than 230 people initially arrested were charged with felony rioting.

The cases stem from an anti-fascist and anti-capitalist rally on January 20, 2017, during which police clashed with protesters and detained hundreds, including journalists, medics, legal observers and bystanders.

A handful of protesters destroyed property as they made their way through the capital's streets.

After the initial charges, the Superior Court of DC returned a superseding indictment that added additional charges for some 212 defendants. The charges carried sentences of more than 60 years in jail.

About 21 of the defendants pleaded guilty. The remaining - about 190 - were divided up into multiple trial groups.

What followed was more than a year of hearings and waiting for the trials to take place.

"The state failed at silencing dissent and today our movement is stronger than it was on #J20," tweeted Dylan Petrohilos, who did not attend the rally, but was charged as part of the superseding indictment. Petrohilos had his charges dropped at the end of May.

"I'm proud of all my co-defendants, and everyone in the streets who resisted fascism and state violence," he said on Friday.

Setbacks from the start

Prosecutors faced a number of setbacks as the trials move forward.

The first trial ended with the acquittal of the six defendants being tried. Prosecutors then dropped the charges for nearly 130 defendants. The May trial of four people ended with an acquittal on most charges and a hung jury on the rest.

Also in May, a judge ruled that government withheld evidence after it presented an edited video, obtained from Project Veritas, a far-right organisation known for targeting leftists and anti-fascists.

In a statement to local media on Friday, the US Attorney's Office for the District of Columbia said it "believes that the evidence shows that a riot occurred on January 20, 2017, during which more than $100,000 in damage was caused to numerous public and private properties".

It added: "The destruction that occurred during these criminal acts was in sharp contrast to the peaceful demonstrations and gatherings that took place over the Inauguration weekend in the District of Columbia, and created a danger for all who were nearby."

In February, the Partnership for Civil Justice Fund (PCJF) filed a lawsuit, seeking information regarding the DC police department and its officers' alleged relationships with a number of far-right groups, including Project Veritas.

On Friday, PCJF tweeted that it is "time to investigate the USAO [United States Attorney's Office] & DCMPD [DC Metropolitan Police Department] for this crime against the 1st Amendment". 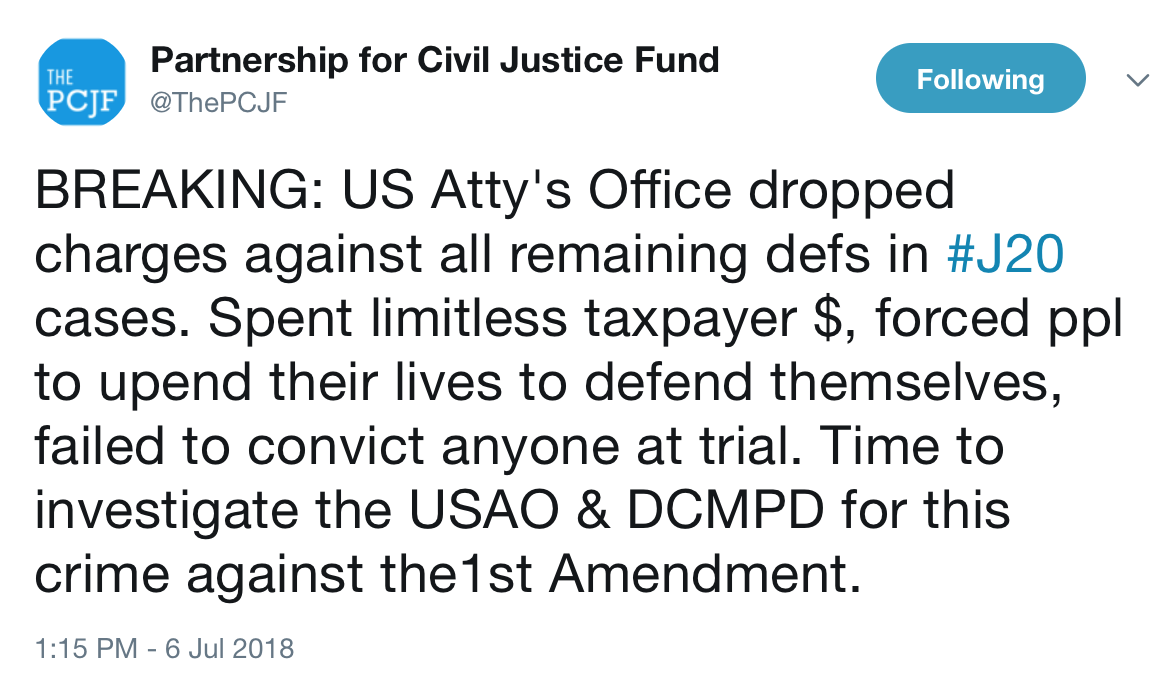 Throughout the last year and a half, defendants and their supporters have routinely pointed out that the solidarity they showed each other helped at each point in the case.

While a handful of people took plea bargains, the majority stood together and refused to negotiate deals they thought could put their co-defendants at risk.

"Solidarity was what won the case," said Sam Menefee-Libey, a member of the DC Legal Posse activist collective, was quoted as saying by the Associated Press. "I hope that organisers and people on the left study it."

Others celebrated online but pointed out that defendants still face hefty legal fees, especially because many had to give up their jobs to attend hearings.