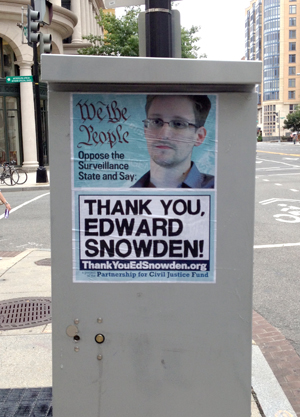 Visit ThankYouEdSnowden.org to join and support this growing national campaign.

Only the People can control the NSA.

The core civil rights in the Bill of Rights are supposed to be enforced through the courts.

But there is no court that can enforce the Bill of Rights against the government's domestic-spying operations, as reflected in the Aug. 21 release of one of the many secret opinions of the Foreign Intelligence Surveillance Court.

The National Security Agency notified the Partnership for Civil Justice Fund of the release in response to our pending public records demands.

The then-Chief of the Foreign Intelligence Surveillance Court Judge John D. Bates, ruling a massive collection of domestic data to be unconstitutional, wrote in 2011, “For the first time, the government has now advised the court that the volume and nature of the information it has been collecting is fundamentally different from what the court had been led to believe." (Declassified "Foreign Intelligence Surveillance Court Memorandum Opinion and Order (J. Bates)," Oct. 3, 2011)

In other words, the U.S. government lied to this Court. Of course, to even reference this as a "court" is something of a stretch.Although administered by federal court judges, the FISC does not have the core characteristics of a court; i.e., open hearings, due process, adversarial proceedings.

Last week, the current Chief of the FISC, Reggie B. Walton, admitted "The FISC is forced to rely on the accuracy of the information that is provided to the Court" by the U.S. government. "The FISC does not have the capacity to investigate issues of noncompliance. . ."

This is a court in which the Government controls the evidence. There is no adversary. And there is rarely a ruling or order made public. And even with the playing field tilted so severely in favor of expansive government authority, the U.S. government still lies to the FISC.

There is no court process in the United States to enforce the Bill of Rights -- a fundamental set of limitations, controls, on the scope of government authorities -- when it comes to the surveillance grid that has secretly been put in place by the U.S. government.

The Bill of Rights defines the framework of government. It reflects the will of the people and the Framers that government authorities exist only with the consent of the people, that there not be unlimited police and search and seizure powers, and that civil liberties remain the core protection we have against government abuses.

The courts are, admittedly and clearly, unable to enforce the Bill of Rights when it comes to this massive surveillance grid.

The courts cannot act. The President supports the programs. The Congress continues to be controlled by those who support the surveillance state.

This is why the role of whistleblowers, such as Bradley Manning and Edward Snowden, and the public records demands by public interest organizations for disclosure are so essential.

But equally essential, is the role of the people, now, to engage in collective action, to bring public pressure to bear upon those in Government. To use the existing window of opportunity to put an end to the surveillance state, including the NSA's domestic spying operations.

The Partnership for Civil Justice Fund is actively pursuing Freedom of Information Act (FOIA) demands to the NSA, the Department of Homeland Security, the Department of Justice and the FBI for documents related to the identification of mass surveillance programs, their scope, operating guidelines and procedures, retention of data collected through such programs, and internal evaluations attempting to justify these programs' legality and constitutionality.

Carl Messineo is the Legal Director of the Partnership for Civil Justice Fund.