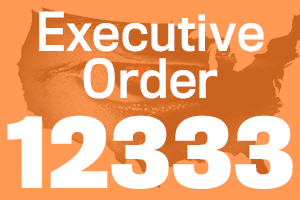 Executive Order 12333, highlighted in June by whistleblower John Napier Tye, indicates that this reality is already upon us. It is possibly the most significant surveillance story and unconstitutional privacy abuse to date, but the elected politicians have not yet challenged it. A New York Times article yesterday reported on how the present Congressional debate about the Foreign Intelligence Surveillance Act is leaving untouched Executive Order 12333.

Tye says the Executive Order goes far beyond FISA and demands urgent attention. “We are at an inflection point in human history,” he told the Times.

The Order, issued in 1981 by then-President Ronald Reagan, allows for the collection and storage of all the contents of telecommunications that were intercepted "incidentally" in the course of antiterrorism operations conducted overseas.

Documents released by Edward Snowden show that the Obama Administration is actively using Executive Order 12333. Moreoever, it appears that the President rejected recommendations from his own appointed surveillance review group that restraints be put on the use of Executive Order 12333 to engage in the mass warrantless collection of information.

In today's era of digital communications, in which nearly all text messages, phone calls and emails pass through multiple international servers and data centers, the implications are obvious. It is likely, based on the words of Tye, that the NSA can access the contents of all of society's communications, going back at least 5 years.

It does so without warrants or oversight, nor does it necessarily report its activities to the telecom corporations. Ed Snowden's revelations have shown that intelligence agencies have physically hacked the overseas cables of Google and Yahoo.

There is no meaningful historic example of the government voluntarily refraining from exercising the surveillance powers it gives to itself. If they can develop a legal interpretation to allow complete data collection, as Tye indicates they have, it is safe to assume they are doing precisely that.

Civil liberties in this country are in profound crisis. The NSA and FBI, with the willful support of the White House, the silent complicity of Congress, and the underhanded approval of the Judiciary, have shredded the Constitution. No secret courts, slippery phrases and vague regulations can change this situation -- that is the political and legal environment in which these intelligence agencies already thrive.

The only answer is an explicit ban of mass data collection, of any type, the end of dragnet surveillance, and the immediate defunding of agencies with a known record of constitutional abuses.

The question of surveillance must be a matter of public debate and open decision-making. If the programs cannot withstand public scrutiny -- and we believe they cannot -- then they have no place in a country that presents itself as a democracy.

With every passing day the number of people demanding the dismantling of the unconstitutional surveillance state are joining together in a powerful grassroots movement. This includes courageous whistleblowers from inside the surveillance apparatus.

It is this movement that keeps exposing the lies and demanding the truth. Without grassroots pressure  all the Congressional hearings, media debate and "reform" proposals related to the NSA's surveillance practices would be a farce.

The Congressional hearings would succeed at just scratching the surface or, worse still, a deliberate exercise to keep hidden the real extent of the NSA's powers and practices.

We must act to roll back this Executive Order form of government that is shredding the Constitution.

The constant barrage of surveillance-themed news and talking heads must not detract from the urgency of this moment. Click this link to take action and demand Congress end all mass surveillance programs.