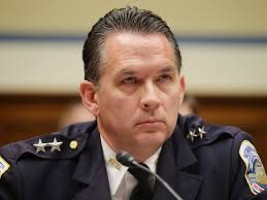 D.C. Mayor Muriel Bowser recently announced Peter Newsham as her pick to be chief of the DC Metropolitan Police Department. The PCJF is calling on the D.C. Council to reject the mayor’s appointment of Newsham, and we hope that you will join us at the public hearing on Friday, March 24.

Peter Newsham conducted the infamous 2002 Pershing Park sweeping illegal mass arrest of nearly 400 demonstrators, reporters, legal observers, tourists and passers-by, along with then-Chief Charles Ramsey. At the inauguration of Donald Trump, just two months ago, Newsham conducted another mass dragnet arrest sweeping up protestors, journalists and legal observers. This time hundreds of people are being prosecuted as felony rioters, even without any specific conduct being attributed to individuals charged.

The Partnership for Civil Justice Fund has publicly spoken out against Newsham's appointment, first as Interim Police Chief and now as Police Chief.

This Friday, March 24, at 9:30 a.m. the D.C. Council Committee on Judiciary & Public Safety will hold a Public Roundtable on PR22-0144, the "Chief of the Metropolitan Police Department Peter Newsham Confirmation Resolution of 2017." The hearing will take place in Room 500 of the Wilson Building, 1350 Pennsylvania Ave. NW, Washington, D.C. 20004. (See http://dccouncil.us/events/judiciary-public-safety-public-roundtable for details)

I will be there to testify on behalf of the Partnership for Civil Justice Fund, and want to personally encourage any of you who can to also testify. Whether Peter Newsham's actions impacted you because you were engaged in First Amendment activity, covering that activity as a member of the press, acting as a legal observer, or just observing or passing by on Sept. 27, 2002, or on Inauguration Day, or simply want to take a stand on these critical civil liberties issues, we encourage you to make your voice heard at the hearing by signing up to testify.

If you plan to testify, you should sign up by the close of business Wednesday, March 22 by email to [email protected] or by calling (202) 727-8275. They ask that you provide your name, telephone number, organizational affiliation (if any), and title (if any).

If you cannot be at the hearing in person, you may submit written testimony.

Newsham’s history with mass arrests is a matter of public record.The Partnership for Civil Justice Fund was class counsel and litigated the Pershing Park mass arrest case, which resulted in more than $10 million in damages for nearly 400 persons and major change in the laws governing police handling of demonstrators ― laws Peter Newsham violated on the first day of the Trump Administration.

Over years of litigation the PCJF deposed Newsham under oath, and argued the case at the D.C. Circuit. The courts found Newsham could be held liable for the mass violations of constitutional rights and dismissed his attempted justifications as “nothing short of ludicrous.”

The court found that Newsham’s actions in conducting the sweeping arrest of nearly 400 demonstrators were without lawful basis and denied his request for qualified immunity, finding that “[n]o reasonable officer in Newsham’s position could have believed that probable cause existed to order the sudden arrest of every individual in Pershing Park.” Demonstrators were illegally mass arrested and held for 24 hours or more hogtied in stress-and-duress positions. The D.C. Circuit described in ample detail “just how indefensible Newsham’s actions were.”

Most significantly, the litigation resulted in the D.C. Council's enactment of the First Amendment Rights and Police Standards Act. This law directly guides police handling of demonstrations ― including when there are acts of property damage or violence ― so as to ensure that others are not wrongfully arrested and deprived of their constitutional rights.

At the announcement of his appointment, Newsham again dismissed his egregious violations of the Constitution stating with regard to Pershing Park: “My decision at the time was a decision that I thought was in the best interest of the District of Columbia and of public safety,” he said. “But the Metropolitan Police Department learned a great deal from that experience that we have taken to today, and I think it was exhibited during the inauguration.”

We hope you add your voice as one opposing Peter Newsham's confirmation of Chief of the Metropolitan Police Department. As people are taking to the streets in the Trump era to protest throughout the United States, and in particular here in D.C., it is critical that fundamental First Amendment rights be afforded protection, and critical to this is opposing the appointment of this serial mass violator of civil rights and free expression as Chief of D.C.'s police force.