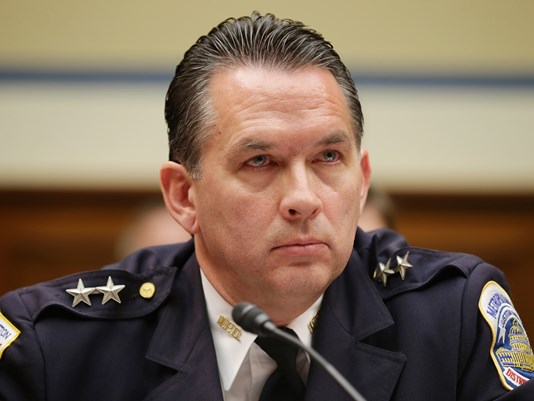 PCJF Sends Open Letter to DC Council: Last-Minute Revelations Require There Should Be No Confirmation of Newsham Prior to Independent Investigation Into Police Actions of January 20, 2017

The Partnership for Civil Justice Fund sent the following open letter to all members of the D.C. Council prior to the May 2 Legislative Meeting at which there will be a reading and vote on the "Chief of the Metropolitan Police Department Peter Newsham Confirmation Resolution of 2017 (PR 22-144)."

Information just disclosed to the Partnership for Civil Justice Fund regarding the handling of January 20, 2017, demonstrations against Donald Trump confirms that the Council should not vote on the nomination of Peter Newsham to be named Chief of Police of Washington, D.C., until it has held an independent investigation into the police conduct that day. In light of these disclosures, the PCJF is reiterating its call that the D.C. Council conduct a full independent investigation into the mass arrests, use of indiscriminate violent force, and participation in an unprecedented ongoing mass prosecution prior to voting on the nomination, as it is without crucial information to evaluate Mr. Newsham’s fitness to hold this important office.

At this moment, hundreds of people are being aggressively prosecuted and are facing life-altering felony charges for acts that they did not commit on the basis that they were in proximity to others who did commit criminal acts of property destruction. The nexus is the lawful portion of activity – the First Amendment protest. Under these standards any person lawfully participating at any demonstration or engaged in reporting on it could thus be arrested for the criminal acts of others – protesters or provocateurs.

The stakes are high. Criminalization of First Amendment activity is a danger and threat that the nation’s capitol and democracy cannot tolerate. And what happens here in Washington, D.C., as a testing ground will have national repercussions in the coming period. The Council simply cannot overlook its obligations in this regard.

The Council will also be disregarding its obligations to the people of the District of Columbia if it suspends its oversight obligations and accepts without independent investigation the broad brush assertions of Peter Newsham who seeks to justify violations of the Council’s own duly enacted laws and the Constitution under the mandate of “restoring order.” The Council cannot leave it up to the MPD to investigate itself, but must take action as a body to engage in a thorough and independent investigation.

The PCJF filed a lawsuit seeking information regarding the actions of January 20 (Partnership for Civil Justice Fund v District of Columbia, 2017 CA 001931 B) after the MPD violated its legal obligations to make such information public. With that lawsuit pending, the MPD waited until the close of business Friday, April 28, just before the Council is set to vote, to release information confirming that the MPD violated both the First Amendment Rights and Police Standards Act and its own Standard Operating Procedures on January 20.

Key documents that the MPD is required to maintain demonstrating its compliance with issuing dispersal orders and certain police obligations in the context of high volume arrests – including when there is property destruction during a protest activity – do not exist. These include all written documentation of arrest warnings, certain High Volume Arrest documentation, and recordings made pursuant to DC. Code 5-331.07(e). Other materials that would reflect on the lawfulness of, and provide accountability regarding, the MPD’s action are still being unlawfully withheld.

The USAO has just issued a superseding indictment charging hundreds of people for the acts of a few, including leveling conspiracy charges and destruction of property charges against individuals even though they did not destroy property. Prosecutors assert in part that a probable cause basis exists against persons who did not actually commit acts of damage because they “did not exercise multiple opportunities to leave” the protests – yet the recent information obtained as a result of the PCJF’s records litigation makes clear that the MPD issued no orders to disperse and no arrest warnings through required to do so.

More than 12 years ago the Council acted to ensure an end to mass violations of civil rights in the context of free speech in Washington, D.C., enacting the First Amendment Rights and Police Standards Act.

Had Peter Newsham and the MPD followed the law and required procedures, these arrests made without particularized probable cause would not have occurred nor would the police’s indiscriminate use of violent force against civilians.

Moreover, there is good reason to believe that there would have been less damage to property. Rather than acting to arrest the few individuals who were observed breaking the law, or even disperse the crowd if that was warranted, the MPD chose to allow incident after incident and escalation for more than a half an hour. It thereafter encircled and arrested a large undifferentiated group of persons, including journalists and lawful demonstrators, at a randomly selected location and moment.

Whether this was negligence, incompetence or a deliberate decision to allow escalation in order to justify a mass arrest and displace carefully crafted laws and procedures regarding handling of demonstration activity – confirmation should not occur, and certainly not without a thorough investigation that uncovers what police decisions and actions were taken that day, and the basis for them.

Peter Newsham’s willful disobedience of law and required procedure should not be rewarded by appointment to the position of Chief of Police of the nation’s capital. The right to free speech in United States is under threat. (See “UN rights experts urge lawmakers to stop ‘alarming’ trend to curb freedom of assembly in the US” at UN Office of Human Rights: www.ohchr.org.) The Council must act to protect this cherished right and ensure its safe and free exercise in Washington, D.C.

A PDF of the full letter can be found here.

Executive Director Mara Verheyden-Hilliard's testimony to the Committee on the Judiciary & Public Safety Public Roundtable can be read here.