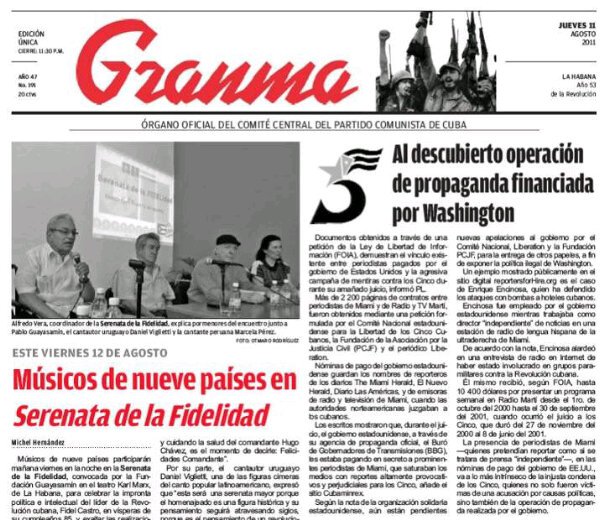 More revelations about the U.S.-funded propaganda effort against the Cuban Five

As a result of these disclosures, further proof has emerged about how prominent reporters of the Miami Herald, El Nuevo Herald, Diario Las Américas, and Miami radio and TV stations were employed by the U.S. government, which was prosecuting the Cuban five anti-terrorists, at the same time as they reported on the case of the Five with highly-prejudicial articles.

The information revealed so far forms an important part of the ongoing habeas corpus appeals of the Cuban Five. Appeals are still pending for the release of more documents, to continue exposing the widespread and systematic practice of the U.S. government secretly paying Miami-based journalists.

Excerpts from the newly-released part II of the analysis of the documents:

Enrique Encinosa, who advocates the bombing of Cuban hotels, was employed by the U.S. government while he was working as an "independent" news director on the powerful right-wing Spanish-language radio station in Miami.

Encinosa boasted in an Internet radio interview: "I arrived in the United States in 1961. I became involved in the anti-Castro paramilitary organizations when I was 16. I participated in a number of military and covert operations into Cuba as a very young man. I worked cloak and dagger in covert operations."