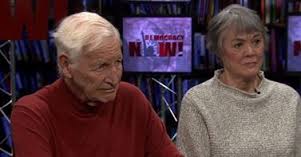 -- By Carl Messineo and Mara Verheyden-Hilliard --

The group of activists who in 1971 broke into the Media, Pa. FBI office have come forward and received national media attention. Looking back at the burglary today, over 40 years later, one remarkable point stands out: The focus today is not on its "illegality." This is because all sides now recognize that the action exposed a much-wider illegality on the part of the government. In the historical view, this is what matters.

The activists' action, aimed at revealing the extent of FBI spying on the antiwar, civil rights movements and other social justice organizing, uncovered far more than they could have imagined. Among the thousands of pages they released to the press was a reference to "COINTELPRO," which soon was unmasked as an extensive FBI surveillance program aimed at neutralizing, disrupting, entrapping, blackmailing and intimidating social justice activists and movements.

After the break-in, J. Edgar Hoover's shady and unconstitutional system began to unravel. While most politicians quickly condemned the unlawfulness of the break-in and endorsed COINTELPRO programs as necessary for national security and the prevention of violence, the people were outraged. One revelation led to another. A sprawling surveillance apparatus was revealed. Combined with the Watergate scandal and the release of the Pentagon Papers -- again due to whistleblowers -- it became clear that the government had lied to and misled the public in order to conceal its unconstitutional usurpation of authority.

This was the context that finally led to Congressional action. The Church Committee probed further, drawing on the documents from the 1971 break-in. The laws protecting non-violent activists and curtailing FBI infiltration were rewritten. Provisions protecting civil liberties and privacy were strengthened as was the judicial oversight of the FBI. The Freedom of Information Act was passed. Hoover’s discredited model of intelligence was publicly rejected in favor of one based on evidence of actual or planned criminal misconduct, as envisioned by the Bill of Rights.

In the past year we have heard the country's elected officials say things like: "Edward Snowden should have used the existing protections for whistleblowers and worked within the system" and "NSA surveillance activities are already regulated and in compliance with laws protecting citizens' civil liberties."

It is clear that this is wrong. The NSA has willfully violated the Constitution and has used the government’s system of classification to hide evidence of its misconduct. Mr. Snowden would have had no chance to secure a cessation of such unlawful conduct -- let alone to receive a fair consideration internally without being retaliated against or prosecuted. Look at the treatment of Thomas Drake, William Binney and other whistleblowers.

But elected officials also fail to mention that the existing laws and protections, the ones that Snowden and the rest of us were supposed to trust, themselves only came about as the consequence of heroic whistleblower actions, including ones like the Media, Pa. break-in.

FBI spokesman Michael Kortan acknowledged the burglary "contributed to changes" in how the FBI operated. If the country had waited for Hoover's FBI to reform itself through internal review, or waited for secret Congressional committees to take action, we would still be waiting today.

We know now that J. Edgar Hoover’s discredited model of “intelligence” has been re-adopted today. Today it is super-charged by revolutionary advances in technology and capability. We know  now that in addition to the NSA, the FBI, despite its claims of reform, along with the Department of Homeland Security and other arms of the U.S. intelligence apparatus are engaged in surveillance operations of which Hoover could only have dreamt.

The Partnership for Civil Justice Fund uncovered and exposed documents a year ago, revealing that the FBI and the Dept. of Homeland Security conducted extensive spying on the Occupy Wall Street movement in coordination with local police agencies and the Wall Street and banking entities that were the subject of the movement’s protests. They did so under their "anti-terrorism" powers even while admitting the movement was peaceful. The PCJF has obtained thousands of pages of documents and is pursuing further exposure of these abuses to bring them to public light. Click here to read the New York Times coverage of the revelations.

We have also launched the ThankYouEdSnowden.org campaign that is being joined by tens of thousands of people across the United States.

It is no coincidence that the Media, Pa. "burglars" articulated their admiration for Edward Snowden in their first public interviews. They recognize, as so many do, the critical need for his actions in telling the truth to the American public and the great risks he took – like their own – to defend democracy and help shift the tide against the Surveillance State.

Snowden is still being vilified by the political establishment. But that same establishment, facing a growing crisis of credibility, is now discussing the need for reform and President Obama has been forced by public outrage to give a major public address on the issue this Friday.

It is disingenuous to claim to "welcome the debate" but then prosecute the person who initiated the debate, to call reform necessary but then attack those whose actions have shown the need for it.

Yes, history will judge Edward Snowden favorably and with honor. But he deserves recognition and protection as a whistleblower, as well as immunity or pardon, today.

The People of the United States deserve a Republic which does not violate its civil rights through covert mass search and seizure of our most personal and revealing communications, associations, actions and transactions.

We cannot protect ourselves without disclosure, without information, without whistleblowers like Edward Snowden. We cannot restore or protect the system required by the Bill of Rights without being informed. The government acts in secret. We need to stand with all those who expose the truth.