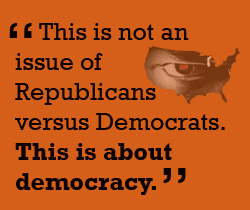 A defining moment and call to action

The endorsement yesterday by Congress of the NSA’s domestic spying program comes as no surprise. The Obama administration and leaders of both major political parties fought hard for the continuation of this unprecedented and unconstitutional program that comprehensively logs and warehouses all of our communications, targeting not “terrorists” but the communications of every person in the United States.

This was not so much a surprise as a defining moment.

The vote crossed party lines, demonstrating that this is not an issue of Republicans versus Democrats. This is about democracy.

This is an epoch-defining battle in our history about the relationship between government and the people.

It is not about whether we are for or against technology, but whether it will be turned from a tool of modern convenience and productivity into a tool of political and social control.

It is about whether we will accept a government that warehouses and can mine every detail of our lives, our transactions, our associations, our movements, and our activities.

Under J. Edgar Hoover and during the disgraced COINTELPRO operations, the FBI accumulated millions of dossiers on individuals. No need for that now. With a touch of a button the government can create a complete profile, knowing more about you than perhaps you even do about yourself.

The vote yesterday in Congress defines the battle. We cannot rely on Congress or the President to provide leadership out of this crisis, for they are its proponents.

Like all historic battles for progressive social change, the leadership will come from the people who have the ultimate power: their collective action to create a society which reflects their highest aspirations.

Progressive social change has never come from above. The civil rights movements, suffrage movements, anti-war movements (embraced today as “mainstream” movements, but disparaged by those in authority in their time) have all been grassroots collective actions.

Like a modern-day Paul Revere, Edward Snowden has sounded an alarm, at great personal cost, to alert us to the surreptitious encroachment of the government spying into our personal and confidential spaces and communications.

We all owe thanks to Edward Snowden. But his clarion call must be a call to action. And this is a struggle that, banding together, we can win.

The Partnership for Civil Justice Fund will remain at the forefront of the battle for fundamental constitutional rights.

• The PCJF continues our persistent investigative work which has led to the release of thousands of pages of documents revealing the collusion by the federal government and corporate America to surveil and crack down on the Occupy movement. This includes demanding the NSA turn over its domestic spying documents under the Freedom of Information Act.

• Our One Nation Under Surveillance campaign launched last year focuses not only on the NSA’s spying program but on warrantless dragnet surveillance programs being planted across the nation, including through technologies such as automatic license plate readers and other new technologies -- all without the consent of the people, without oversight, and in violation of fundamental rights. We know that these surveillance tools are not passive or non-invasive.

• We have just initiated a petition on the PCJF website to fire National Intelligence Director James Clapper for having lied to the American people about the domestic spying operations he was overseeing.

We fight in the Courts and in the streets because we know this to be an epic battle that can be won, but which requires all of us to work together.

We ask you to support the ongoing work and critical new legal challenges of the PCJF by making an urgently needed donation today.

We must continue this fight,