by Sam Adler-Bell
Reprinted from The Intercept
Jan. 19, 2018 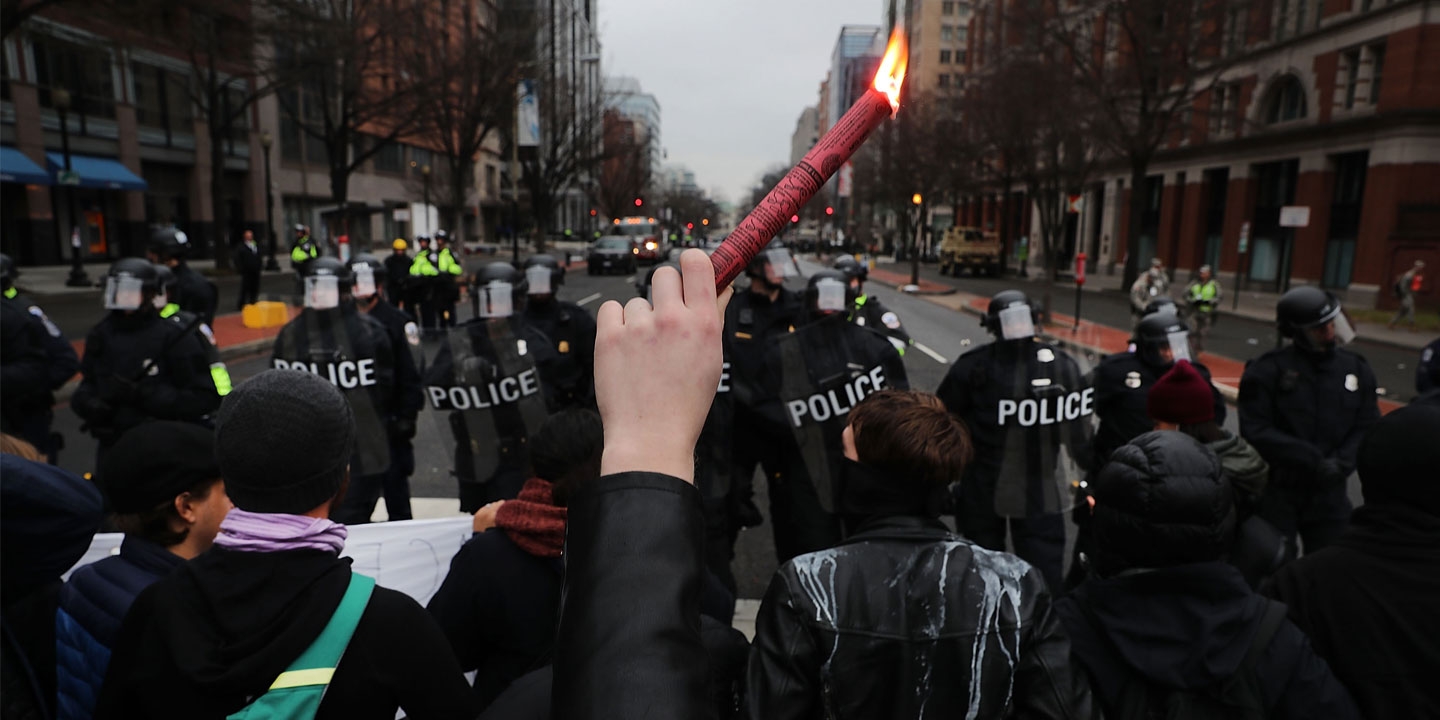 The Government's case against the J20 defendants is falling apart. In December, a jury acquitted the first six defendants facing decades in prison for their participation in an anti-capitalist and anti-fascist march during Donald Trump’s inauguration; on Thursday, the U.S. Attorney’s office dismissed charges against an additional 129 defendants. That leaves just 59 defendants still facing trial in connection with the January 20, 2017 protest.

“We’re pleased to see that the U.S. Attorney’s office is finally acknowledging that it doesn’t have, and never had, evidence to prosecute the majority of the people whom they charged,” Scott Michelman of the D.C. American Civil Liberties Union told The Intercept. “It’s unfortunate it took them a year to succumb to that reality. In the meantime, they put a great number of innocent people through a lot of hardship for no good reason.”

Miel Macchio, a medic at the protest who was acquitted in the first trial, said the dismissals are a testament to the success of the defendants’ collective defense strategy. By refusing to plea and instead coordinating their defense, the accused succeeded in thwarting the government’s effort to collectively punish dissent. “What we are [now] seeing is a strategic narrowing of the government’s case,” Macchio says, “Those still facing charges are now much more vulnerable as a smaller group.”

Among those still charged is journalist Aaron Cantú. According to his lawyers, Cantú faces 75 years in prison for doing his job — reporting on social movements and protests. (Disclosure: Cantú is a personal friend and has contributed to The Intercept.) Along with 233 other demonstrators, journalists, medics, and legal observers, Cantú was surrounded by riot police, detained on the street for seven hours, arrested, and jailed overnight. Like his co-defendants, he was eventually charged with eight felonies — including inciting a riot, engaging in a riot, conspiracy to riot, and several counts of property destruction.

Until Thursday, the government had sought to hold all 194 defendants responsible for the alleged criminal vandalism of a handful of people. The prosecution had argued that all the defendants were guilty of rioting, whether or not they themselves smashed a window. In their view, everyone at the march aided and abetted those who engaged in vandalism. By wearing black and moving together through the streets, argued Assistant U.S. Attorney Rizwan Qureshi, the marchers provided a “getaway car” for those who engaged in violence.

The U.S. Attorney’s office announced Thursday that the government would now be focusing its efforts on prosecuting a “smaller, core group” of defendants “most responsible for the destruction and violence that took place on January 20.”

According to the U.S. Attorney’s motion to proceed, “The government is focusing its efforts on prosecuting those defendants who: (1) engaged in identifiable acts of destruction, violence, or other assaultive conduct; (2) participated in the planning of the violence and destruction; and/or (3) engaged in conduct that demonstrates a knowing and intentional use of the black-bloc tactic on January 20, 2017, to perpetrate, aid or abet violence and destruction.”

How precisely prosecutors selected the remaining 59 defendants — or how they divided them among those categories — remains unclear. Along with Cantú, the 58 still charged include an organizer who never attended the march, medics, and citizen journalists.

The state’s case against protest organizers, who fall in the second category, relies on the testimony of an undercover Metropolitan Police Department officer chargedwith investigating “the anti-establishment community”—as well as text messages extracted from some arrestees’ phones. The infiltrator, Bryan Adelmeyer, attended a “Disrupt J20” planning meeting on January 8, 2017, to collect information about demonstrations planned for Inauguration Day. As Adelmeyer testified, “MPD wanted information on a lot of the activities planned for that day.”

Adelmeyer did not record the meeting he attended, but a mole working for the far-right media group Project Veritas did. Veritas claims to have provided the footage to the FBI, Secret Service, and D.C. police. Prosecutors introduced the Veritas video in court. In it, organizers can be heard discussing plans for blockades and other civil disobedience. At one point, a speaker promises to make the inauguration a “giant clusterfuck.” At no point do they explicitly endorse property destruction.

According to lawyers and rights advocates, the third category of defendant listed in the motion to proceed — those who “demonstrate a knowing and intentional use of the black-bloc tactic … to perpetuate, aid, or abet violence” — leaves the door open for guilt by association and collective punishment.

The U.S. Attorney’s office “is desperate in the remaining cases to establish that people can be imprisoned not for criminal actions but rather for their association and proximity to others,” Mara Verheyden-Hilliard, a constitutional lawyer and executive director of the Partnership for Civil Justice Fund, told The Intercept. “The third category of defendants are being prosecuted based on presumed shared political views and association, specifically participation in a political march while wearing black.”

On Friday, Cantú's lawyers filed a motion in D.C. Superior Court to dismiss the charges against their client, arguing that the indictment infringes on his First Amendment rights. At least eight other journalists — Alexander Contompasis, Evan Engel, Matthew Hopard, Shay Horse, John Keller, Cheney Orr, Alexander Rubinstein, and Alexei Wood — were also arrested and charged in connection with the J20 protest. The government dropped charges against all of them except Wood, who was acquitted on December 21, 2017, after a monthlong trial. Cantú is now the only professional journalist facing charges. His trial date is set for October 2018.

The defense motion makes three related arguments. Cantú’s lawyers are arguing that the indictment burdens his right to engage in constitutionally protected news-gathering without adequate justification; that if the riot statute does apply to Cantú’s alleged conduct, it criminalizes news-gathering and is therefore unconstitutional; and that the indictment chills freedom of the press in general. “Accepting the government’s broad theory of liability — namely, that a journalist can be criminally liable for the acts of others based only on his presence at a demonstration — would severely chill protected newsgathering activities,” the motion says.

The felony indictment against Cantú alleges only that he was present at the demonstration, that he wore dark clothing, and that he followed the crowd of marchers. “All of those facts,” the defense motion notes, “are consistent with Mr. Cantú’s role as a journalist.” The defense, in other words, is arguing that the government’s version of events doesn’t establish that Cantú willfully associated with a riot.

The Project Veritas video seems likely to play a role in Cantú’s case. Someone identified as Cantú briefly appears in the video, which labels him a “Disrupt J20 organizer.” If Cantú goes to trial, it will be up to the prosecution to prove that Cantú attended the meeting to “plan violence and destruction.”

Cantú’s motion to dismiss will be decided by Chief Judge Robert E. Morin of D.C. Superior Court, who will likely preside over the remaining J20 trials. Morin replaces Judge Lynn Leibovitz, who had presided over the case since early last year, and whose tough demeanor and impatience for ill-prepared or meandering attorneys on either side has been a hallmark of the proceedings thus far. (Leibovitz has indicated that she’ll be rotating out to preside over family court.)

In September, Leibovitz rejected a motion to dismiss the charges against most of the defendants. That motion, like Cantú’s, argued that the D.C. riot statute was unconstitutionally vague, endangering the First Amendment rights of those who had gathered to protest Trump’s inauguration. Siding with the prosecution, Leibovitz ruled that defendants need not be personally responsible for breaking a window to be guilty of multiple felonies. In her judgment, any defendant who “willfully associates” with an “assemblage” causing or threatening tumult and violence can be charged with rioting.

The Cantú motion will be an important test of whether Morin will follow Leibovitz’s lead in accepting the prosecution’s theory of collective liability. Unlike Leibovitz, who was appointed by Republican President George W. Bush after a career as a prosecutor, Morin is a former defense attorney who represented indigent clients and death-row inmates. He was appointed to the court in 1996 by Democratic President Bill Clinton.

Cantú's journalism, the defense argues, is characterized by “in-depth, first-person investigation.” Unlike some journalists, who would stay on the sidelines of a chaotic protest, Cantú’s lawyers said he goeswhere the action is. “He follows an established tradition of journalists who provide the world with vivid accounts of historic events (such as social movements, protests, and wars) by embedding themselves within the very events on which they are reporting.”

The defense motion also notes that the indictment specifically endangers freelance reporters, who “often lack the institutional support of mainstream news organizations and are counted on to provide coverage of more dangerous and violent situations.”

Indeed, the reporters whose charges were most swiftly dropped in the J20 case were those with the backing of large news organizations — including their legal teams. “This prosecution,” the motion says, “tells reporters to stay home and avoid the risk of prosecution rather than to go to the scene of newsworthy events.” The government will have 30 days to respond to the motion.

The U.S. Attorney’s office declined to comment on Cantú or any individual defendant’s case for this story. But the government appears to be trying to regain control of the narrative. On Wednesday, the day before charges against 129 defendants were dismissed, prosecutors released hundreds of hours of police body-camera footage depicting black-clad individuals engaged in property destruction on January 20. The footage, which was used as evidence in the case against the first six defendants, aired Wednesday on D.C.’s local Fox 5 station.

“The U.S. Attorney’s office chose to release that video to distract from their admission that they had no basis for severely damaging the lives of 129 innocent people,” said Sam Menefee-Libey, of the D.C. Legal Posse, which is coordinating support for the defendants. “Now they’re trying to demonize the remaining 59.”