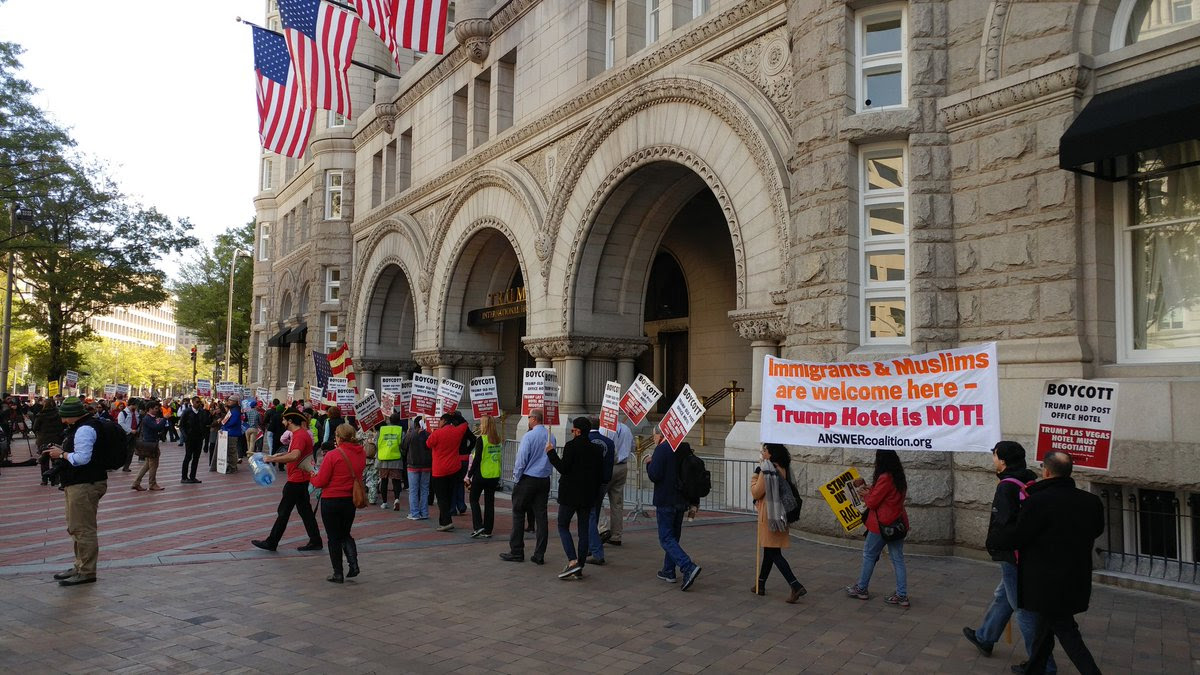 In the first presidential debate, Donald Trump spent a minute pitching his newest hotel in Washington across from the White House, saying the hotel, which opened two weeks earlier, was done "under budget" and “ahead of schedule,” and that’s how he would run America.

But when it opened on Monday, September 12, it was after a weekend-long scramble by contractors. The hotel did not even have a standard “certificate of occupancy” permit allowing visitors to enter the premises, according to a series of emails between the federal issuing agency and Trump’s management obtained this week under a federal Freedom of Information Act request by the Partnership For Civil Justice Fund.

“I’ll give you an example. We’re just opening up, on Pennsylvania Avenue, right next to the White House, so if I don’t get there one way, I’m going to get to Pennsylvania Avenue another,” Trump said in the late September debate. “But we’re opening the old Post Office. Under budget. Ahead of schedule. Save tremendous money. I’m a year ahead of schedule. And that’s what this country should be doing.”

Actually, the opening of the new Trump International Hotel did not go as smoothly as he told the 84 million people watching the debate, said PCJF’s Mara Verheyden-Hilliard. (The hotel staged a "grand opening" Wednesday, after a "soft opening" in September.)

“He has been saying this over and over again, using his campaign to promote his business interests,” she said. “He said he will run the country the way he is running his hotels. He said he is tremendously ahead of schedule. But these documents would suggest otherwise.”

That is an understatement. The General Services Administration was bending over backward to accommodate Trump’s opening, the emails reveal, while warning the hotel’s management they weren’t getting the job done in order to get a certificate of occupancy by opening day, Monday, September 12.

“Our team… has been working very hard and very closely with the Trump organization over the past couple weeks as they have been somewhat behind the construction schedule that they provided to us," wrote the agency’s Brett Banks at 2:28pm on the Friday prior. “So as we sit here two days before the opening of the hotel, we have still have not issued a certificate of occupancy. We do believe the Trump [organization] has submitted a viable plan that can get them in a position for completion in the building for GSA to issue a temporary certificate.”

“The hotel operator must complete certain work items before GSA can issue the required certificate of occupancy,” replied the agency’s Michael Gelber at 3:16pm. “Work is occurring at this site through the weekend and GSA personnel will monitor this activity.”

Outside the hotel Monday, protests forced Trump to cancel a ribbon-cutting ceremony. But inside, he again boasted that the work was done “dramatically ahead of schedule” and hotel executives added that opening bookings “continues to exceed our expectations.” Yet the documents also reveal that was not the case, PCJF said. The GSA emails noted the 263-room hotel was two-thirds empty on the opening days.

“The documents show that multiple employees of the GSA were communicating over the weekend before the Monday, September 12, opening of the Trump Hotel and that just hours before the first guests were scheduled to arrive, the hotel had still not completed its work or required inspections and safety tests and as such did not have a Certificate of Occupancy despite its looming Monday opening,” PCJF’s release said. “In fact, the hotel was significantly enough behind that even if it completed certain identified work by the Monday opening, it would only receive a Temporary Certificate of Occupancy. The records end without any indication of when or whether the final Certificate of Occupancy did issue.”

It's not breaking news that Trump is a serial self-promoter and liar, but this small glimpse into the operations of his business reveal that his repeated boasts don't match the reality on the ground. The email exchange can be seen here.

Steven Rosenfeld covers national political issues for AlterNet, including America's retirement crisis, democracy and voting rights, and campaigns and elections. He is the author of "Count My Vote: A Citizen's Guide to Voting" (AlterNet Books, 2008).