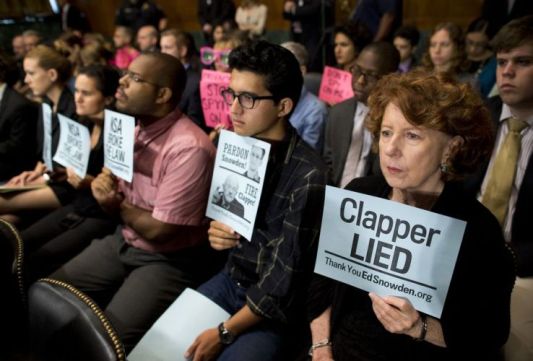 Activists from ThankYouEdSnowden.org staged a highly visible protest today inside the Senate Judiciary Committee hearing that featured the testimony of NSA Director Gen. Keith Alexander and James Clapper, Director of National Intelligence. The Thank You Ed Snowden campaign was initiated by the Partnership for Civil Justice Fund (PCJF).

When Clapper entered the hearing room in the Senate Dirksen Building at 10:00 a.m. this morning, he was greeted by a gaggle of photographers and an activist prominently holding the sign right behind him that read "Clapper Lied! ThankYouEdSnowden.org."

People all over the country are demanding that Clapper be immediately fired for his perjured testimony before Congress on March 12, 2013, when he denied under oath that the government was secretly collecting data on the American people.

Clapper has admitted now -- but only after whistleblower Edward Snowden courageously revealed the existence of the spying program -- that he did not tell the truth in his sworn testimony before Congress.

“Does the NSA collect any type of data at all on millions or hundreds of millions of Americans?” asked Senator Ron Wyden when Clapper gave his sworn testimony in March 2013.

Perjury is a serious offense. Neither Clapper nor any other high government official is above the law. The U.S. Constitution requires removal of any civil officer guilty of “high crimes and misdemeanors” such as perjury. Clapper’s crime was more than mere perjury.

His crime is an abuse of office, a public corruption, an offense against society and democracy.

While the activists staged the dramatic protest inside the Senate Judiciary Hearing, thousands more people joining the PCJF’s campaign and sending emails and faxes, and making phone calls to Congressional offices supporting the demand that the NSA spying program be ended. It has been developed in secret, without debate and without the consent of the people.