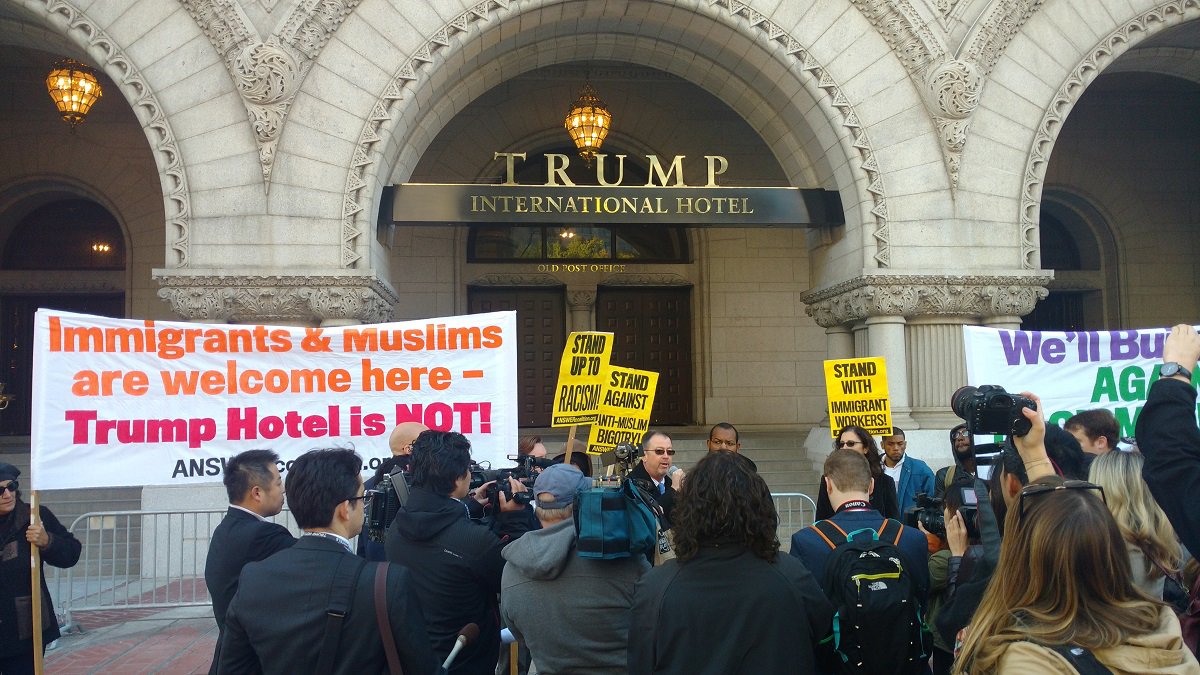 After months of denial and stonewalling by the General Service Administration (GSA), the Partnership for Civil Justice Fund (PCJF) has uncovered through painstaking and persistent litigation that certain government communications between the GSA and the Trump Organization negotiating terms of the arrangements for the Trump International Hotel on Pennsylvania Avenue have been kept outside agency records, on private email.

When the PCJF, which has been engaged in FOIA litigation since August 2016, notified the GSA of the discovery of the use of the private email, it refused to search for and retrieve the communications. Instead the GSA tried to shut down the lawsuit by filing a motion for summary judgment.

The PCJF is in litigation in federal court against the General Services Administration, which is both landlord to the Trump Organization’s controversial Trump Hotel on Pennsylvania Avenue and is simultaneously under the control of Donald Trump as President of the United States.

In spite of the previous government efforts at obfuscation, it has been established that the GSA project manager communicated with the Trump Organization in discussions over the Trump Hotel development, using a private non-governmental email account to maintain those government records. While the manager also possessed a GSA account, substantial communication, including directly with the Trump Organization, appears to have taken place solely using the private email and without cc’ing to the GSA email network.

“Transparency, and the law, demand the release of these records to the public,” stated Mara Verheyden-Hilliard, Executive Director of the PCJF. "The American people are entitled to know what the conversations with the Trump Organization were, what the demands were and what deals were negotiated in order for the Trumps to take over the public's property to create their conflict-laden, ethics-challenged, profit-making operation on America's Main Street."

The GSA lease, negotiations and redevelopment agreements with the Trump Organization and consequential impact on constitutional rights and democratic processes have been a matter of significant public concern. A number of other organizations filed FOIA requests after the PCJF did so, also seeking records related to the Trump International Hotel; litigation has been filed challenging whether President Trump’s operation of the hotel violates the emoluments clause of the Constitution; and just days ago members of the House Committee on Oversight and Government Reform filed suit seeking release of GSA documents. Because these government records were kept off of the GSA record keeping network, requests for records from the GSA have not produced communications maintained in this private email repository. It is not clear whether any of these other requesting entities have been notified by the GSA of the use of this private email account identified by the PCJF.

“We filed this litigation in August 2016 to force disclosure of information and communications with the Trump Organization that were being withheld from the public,” stated Verheyden-Hilliard.

When the PCJF notified the GSA of the discovery of the use of the private email, it refused to search for and retrieve the communications. When pressed further, the GSA told us that we were incorrect, that there were no records off-site that were not also maintained by the GSA. When we provided the GSA with documentary evidence proving the use of the private email gleaned from our investigation and further proof that the communications were not duplicated to GSA files, the GSA again tried to stonewall the effort to obtain the documents. When the PCJF refused to back away from pursuing these materials, the GSA moved for summary judgment in an effort to end our case.

The PCJF has filed a cross-motion for summary judgment in federal court bringing this matter to light and demanding that the records and communications with the Trump Organization detailing the negotiations and terms for the Trump Hotel be retrieved and released to the public.The GSA’s obligations stem not only from the Freedom of Information Act, but pursuant to obligations under the Federal Records Act which requires that the Agency take certain steps to retrieve its records, including through the Archivist of the United States and the Attorney General if necessary to bring litigation to return agency records to the agency.

The PCJF first began investigating the “deal” struck by the GSA with the Trump Organization for the transfer of the historic Old Post Office on Pennsylvania Avenue to establish the Trump International Hotel in early 2016, six months prior to Donald Trump being named the Republican Party candidate in the 2016 presidential election.

The PCJF initiated FOIA requests to the GSA and other federal and local government entities on February 29, 2016 seeking the disclosure of records involving communications regarding, restrictions on use of, and access to, public space and traditional and historic public fora including sidewalk, street and plaza space abutting the Trump International Hotel in the Old Post Office Building (OPO) which has been leased by the General Services Administration to the Trump Organization. These areas have been historically accessible to the public for protest, dissent, assembly and special events, as they constitute quintessential public forums, including “America’s Main Street,” Pennsylvania Avenue.

As the PCJF provided extensive legal support to demonstrators seeking to protest outside the Trump Hotel it became clear that there were serious questions regarding the transfer of public land to the Trump Organization including the impact of that transfer of the public’s space on fundamental First Amendment Rights.