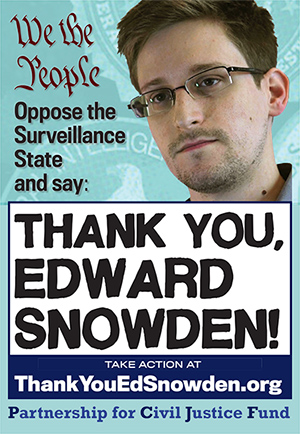 Join the thousands who are saying No to the Surveillance State

This sign is being printed for mass visibility at Saturday's rally. Please click here to make a donation and support these efforts.

The time to act is right now and we are!

Thousands of people are taking to the streets of Washington, D.C., this Saturday, October 26 for a major Rally Against Mass Surveillance.

The Thank You Ed Snowden campaign -- initiated by the Partnership for Civil Justice Fund -- is mobilizing for this important event, and is encouraging all its supporters to attend as well.

We are printing placards, banners and informational literature with the clear message that the American people stand behind Edward Snowden and oppose bulk data collection, dragnet surveillance, and spying on the people of the United States and the world.  We reject the U.S. government's targeting and indictment of Snowden, whose courageous whistle-blowing actions have revealed that the NSA has unconstitutionally collected, in secret, information about all of our private communications, including every phone call and email.

This is going to be a major show of force. Hundreds of organizations are uniting to say NO to the surveillance state

Momentum is growing for these spying programs to be immediately halted. They were constructed in secret. There was no debate and the American people never gave their consent. This seizure and retention of our communications by U.S. intelligence agencies is not triggered by individualized suspicion of criminal wrongdoing, as required by the Fourth Amendment, but rather is an illegal, unconstitutional abuse of power.

There is no more important place to be this Saturday than Washington, D.C., in front of Congress. Organizers are planning to hand over half a million petitions against mass surveillance to Congress.

This is a fight for the future of the country, about whether our constitutional rights will merely exist on paper or be respected by the government. The Partnership for Civil Justice Fund and the Thank You Ed Snowden campaign are assembling at  11:30 am at Columbus Circle in front of Union Station and at 12 noon we will march to the Capitol Building.

If you cannot join us in Washington, D.C. this Saturday, please consider making a contribution to help us print 'Thank You, Ed Snowden' literature and signs to send a message far and wide. Acting together, we know that this new movement against mass surveillance can make the difference in the future of our society.

With the support of many people we will be renting large size Thank You Ed Snowden bus wrap ads for buses traveling around Capitol Hill and the White House in downtown Washington D.C. Please support this effort too by making a generous contribution.