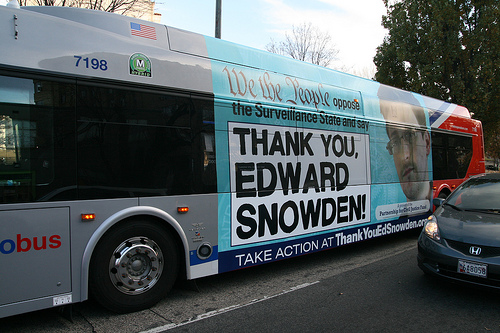 Yesterday marked the roll-out of the Thank You Ed Snowden bus ads on the streets of Washington, D.C.!

Because of the crowd-funding support this project is receiving, it is starting to take off! We are happy to announce it is now being expanded. We have taken out ads on five additional buses, which will hit the streets of D.C. soon.

As the press covers this exciting campaign, people across the country are joining the movement opposing the NSA's Surveillance State. Several online comments have captured the spirit of the project perfectly: "Courage is contagious!" "No army in the world can stop an idea whose time is come!"

Thanks to everyone who has already made a donation. You have gotten us this far, and if you can help again, it will make a big difference. If you haven't made a donation, please do so right now by following this link.

In recent months, the PCJF has organized a public advocacy campaign that has generated thousands of letters and emails to Congressional offices. These letters have expressed opposition to the NSA's massive, covert spying and bulk surveillance programs. The momentum of this movement is building and will not be turned away.

We've got photos and videos of the bus ads on the streets of Washington, D.C. -- follow this link!

Please keep telling your friends and family members on Twitter, Facebook and all over social media to join the movement opposing the Surveillance State!