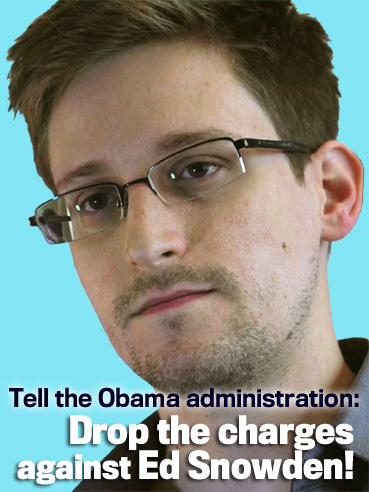 We have just sent a letter to President Obama and Attorney General Eric Holder urging them to withdraw the charge of espionage and all other criminal charges against Edward Snowden and to grant him immunity from prosecution for his whistle-blowing and disclosure activities. We stated that Mr. Snowden should be allowed “to return home without threat, and to testify to the United States Congress and to the people of the United States as to the programs and operations that threaten the very fabric of our cherished civil liberties.”

We are writing to urge you and thousands of others to also send an email or fax to the President and Attorney General with a similar message.

Mr. Snowden has been demonized as a “traitor” by some politicians and is facing a lifetime of imprisonment. We couldn’t disagree more. At great personal sacrifice he dared to reveal the truth and triggered a debate the outcome of which will determine the character of our country and our ability to defend cherished personal freedoms and democracy itself.

As we said in our letter asking that the criminal charges against Mr. Snowden be withdrawn: “This is the opportunity for the United States to take a stand in defense of the Bill of Rights, to correct misdirection, and to pave a path for the future of our country that can stand in allegiance to free speech, to freedom and to democracy.”

"We hope that you will consider this letter’s request, as well as the voices of the millions of people throughout the United States and around the world who have an expectation that their privacy and personal freedoms will be respected by a government that publicly and officially affirms that these basic rights and values are essential to a governing democracy." To read the full letter, click this link.

Please take a moment and communicate directly to the President and Attorney General. Urge them to use their authority to withdraw the charges against Mr. Snowden.