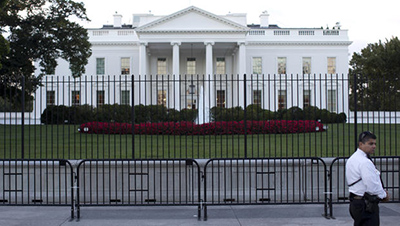 Tell Congress: No to Proposals to Eliminate Free Speech

The area in front of the White House has always been an unparallelled and central location for free speech activities as the people of the United States come to speak out and petition their government.

Now, in an unprecedented maneuver, the Secret Service and other government officials are calling to silence this expression of democracy and curtail the right of the people to assemble freely at this location.

The Secret Service's own documented and unprofessional security failures allowed a mentally ill homeless veteran to get across the restricted and enclosed lawn and through the front doors of the White House. They are using this as a pretext to propose outrageous restrictions including the closing of the public areas in front of the White House and the erection of checkpoints.

There is no legitimate basis for these proposals and the constitutional right to assemble on this public space should not be eliminated or restricted because of the Secret Service's own failure to properly carry out its duties.

We need everyone to speak out in opposition to these plans. Congress is holding hearings next Tuesday.

Take a moment right now to tell your representatives, the Secretary of the Interior (which has jurisdiction over the location) and the Director of the Secret Service that we will not allow them to take this space away from the American public.  This is major assault on First Amendment rights and would be landmark and detrimental change that does not bode well for the future of a democratic society.

Below is an article from The Hill on the implications of these new restrictions.

Civil liberties advocates are sounding the alarm amid reports that federal authorities may impose new restrictions to public access around the White House in response to a security lapse last week that allowed a fence jumper to walk through the front door of 1600 Pennsylvania Ave.

In the aftermath of the embarrassing episode, the Secret Service is considering a permanent extension of the perimeter outside the compound. The agency is also weighing a new screening system requiring individuals to submit to bag checks before entering the park or streets immediately surrounding the White House.

"Closing the White House sidewalk or Pennsylvania Avenue to protest, or setting up checkpoints, would be an outrageous assault on free speech rights in the United States," said Mara Verheyden-Hilliard, a constitutional rights attorney who serves as executive director of the Partnership for Civil Justice Fund (PCJF)

The area directly north of the White House is a popular tourist spot, and perennial location for protest rallies staged by all manner of groups seeking to influence the White House.

As such, any closure of the area would be “an unconstitutional abridgment and illegal removal from public access of one of the most important, vibrant, historical and critical public fora that exists for the purpose of free expression,” Verheyden-Hilliard said.

Citing a "systematic" removal of the removal of space for public assembly in Washington and beyond, the fund has challenged previous efforts to limit access. The group prevailed in a legal action against then-New York City Mayor Michael Bloomberg after his administration sought to close the Great Lawn of Central Park to protests in order to protect the grass.

In 2008, the PCJF launched a successful campaign to stop the National Park Service from driving mass protest from the National Mall, also under the auspices of protecting the grass.

Consideration of restrictions at the White House, however, is a security issue.

In the days after former Army sniper Omar Gonzalez scaled a fence outside the White House and slipped through its front door carrying a knife, questions have mounted about gaps in security at what is supposed to be an impenetrable fortress.

Those concerns were heightened this week after revelations that police discovered 800 rounds of ammunition, two hatchets and a machete in Gonzalez’s car, parked just blocks from the White House.

As part of its response, the Secret Service has erected a temporary 3-foot barrier outside the White House’s black iron gates.

During a briefing Monday, White House press secretary Josh Earnest said the Secret Service faces a challenge in “balancing the need to ensure the safety and security of the first family, while also ensuring that the White House continues to be the people’s house.”

But Verheyden-Hilliard said the security argument all to often trumps the First Amendment.

"This is part of a growing trend that we are fighting in the removal of public space from the people, to whom it rightfully belongs,” she said.