Justices are being asked to require police to warn peaceful protesters before mass-arresting them. 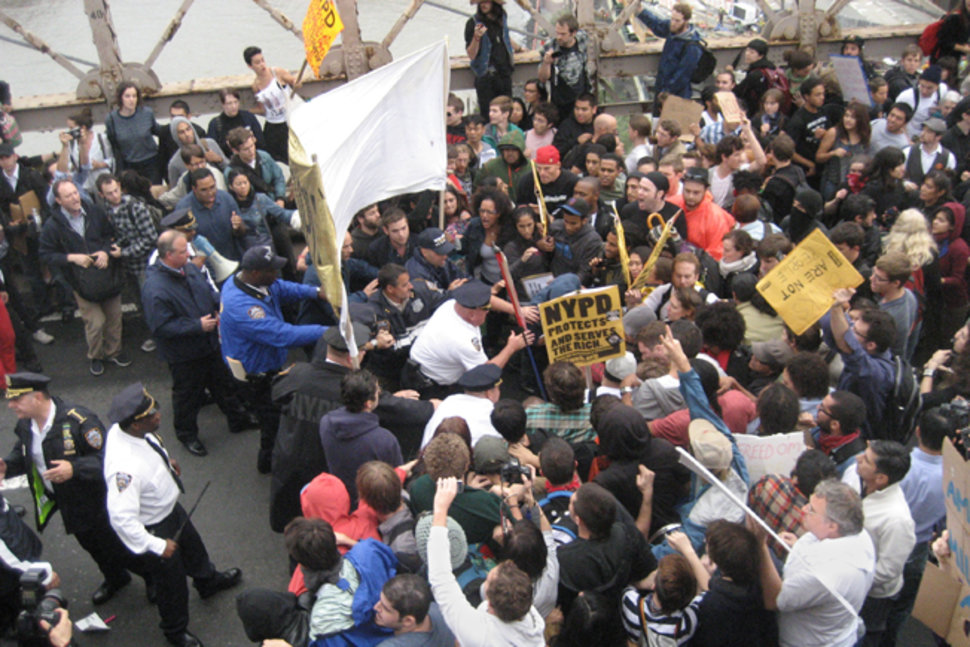 Karina Garcia, a math teacher upset about possible funding cuts for schools and social services after billions of tax dollars went to bank bailouts, heard about a protest march over the Brooklyn Bridge in 2011 to show support for the Occupy Wall Street movement.

Garcia agreed with the message and encouraged her colleagues and high school students, some living in the U.S. illegally, to join her, as they had for other recent protests.

After marching with a police escort through no-walk signals at intersections, Garcia and about 700 others followed police onto the bridge's roadway as others took a footpath.

Halfway across the bridge, the march stopped. Officers unrolled orange plastic netting and, one by one, the trapped protesters on the road were handcuffed and taken to jail.

"I couldn't believe what had just happened to us. We had been led onto the Brooklyn Bridge and then trapped and arrested," Garcia says. "It's so, so, so scary and so dangerous that police can arrest you for no reason at all without giving you any warning." 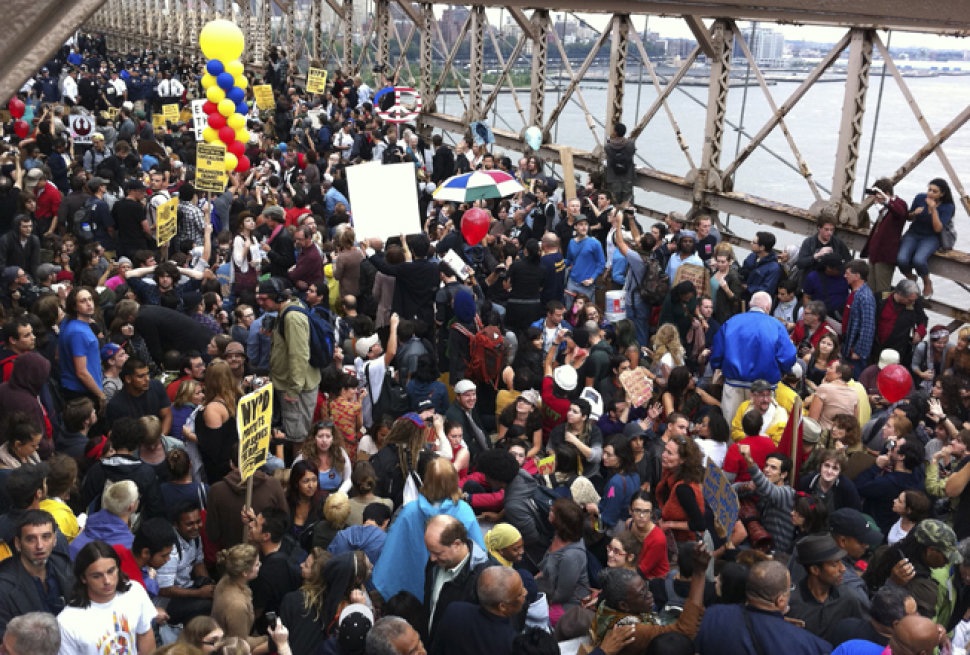 A lawsuit brought by Garcia -- whose disorderly conduct charge was dropped after 10 court appearances over two years -- and others is now pending with the U.S. Supreme Court, seeking a requirement that American police give peaceful protesters fair warning and an opportunity to disperse before arresting them.

The case, Garcia v. Bloomberg, will be discussed by justices at a June 15 conference.

Garcia's legal team and a coalition of press-freedom groups say it's essential for justices to take the case, particularly given an upsurge in protest activity against President Donald Trump and the arguably alarming effect of an unfavorable lower-court ruling.

Garcia, who now works at a nonprofit, says the consequences could have been much worse for others, such as her undocumented students, who didn't make it that day, and that the mass arrest scares many people out of protesting at all.

Paul Hughes, an attorney representing Garcia, says the arrests chill the exercise of First Amendment speech and assembly rights -- and that a loss before the U.S. Court of Appeals for the 2nd Circuit created a circuit split with the 7th, 10th and D.C. circuits, making the case more attractive for the Supreme Court.

"What the 2nd Circuit decision [said] and what the [Mayor Bill de Blasio] administration is defending is that once police allow a demonstration to occur… police nonetheless retain unfettered discretion to arrest anyone who joins in at any point without warning for violation of a traffic ordinance," Hughes says.

The New York City Law Department declined to comment, but in a filing with the Supreme Court argues the case presents only "a narrow question of probable cause" to make arrests and that there is no actual circuit split.

Unlike other cases, city attorneys argue, traffic laws had not been "explicitly or implicitly suspended." In fact, they argue, "the New York prohibition against obstructing traffic is clear, and police never varied it by word or deed."

Hughes says, however, there clearly is a circuit split, with similar facts yielding a more favorable 2011 ruling from a panel of the 7th Circuit in Vodak v. City of Chicago.

In that case, a group of anti-war protesters marched in 2003 without a permit or established route but with acquiescence of police before a large number of protesters, many of whom said they did not hear police orders to disperse, were surrounded and arrested.

"No precedent should be necessary... to establish that the Fourth Amendment does not permit the police to say to a person, 'Go ahead and march,' and then, five minutes later, having revoked the permission for the march without notice to anyone, arrest the person for having marched without police permission," the 7th Circuit ruled.

"This would be 'an indefensible sort of entrapment by the State — convicting a citizen for exercising a privilege which the State had clearly told him was available to him,' the 7th Circuit ruled, quoting from Cox v. Louisiana, a 1965 Supreme Court ruling that expanded protest rights by forbidding "breach of peace" arrests against peaceful protesters.

The 2nd Circuit, ruling against Garcia, found that officers did have probable cause to make arrests because there were no "specific facts to support a direct communication from police to marchers that the marchers were permitted to occupy the road." The appeals panel wrote that "the state of mind of the demonstrators—whether they thought that they were participating in a sanctioned, First Amendment-protected roadway march or whether they were intentionally or recklessly blocking traffic—is irrelevant to the question of probable cause."

Hughes says he's confident the Supreme Court would rule in protesters' favor if the case is accepted.

"What we seek is the intuition that most everyday Americans would have," he says.

"This is an extremely dangerous situation to have it remain the status quo in New York," says Mara Verheyden-Hilliard of the Partnership for Civil Justice Fund, another lawyer representing Garcia.

"The court, de Blasio and the NYPD are telling people that if you want to engage in peaceful First Amendment assembly, if you see a demonstration, if you join an activity that's visibly escorted by police -- even if you think you're obeying the law -- you can suddenly find yourself in jail with no notice, no warning, no opportunity to disperse," she says. "And who can take that risk?"