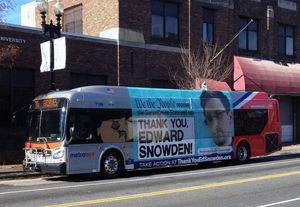 CNN reporting from Obama's speech: "and on cue the "Thank you Snowden" bus passed Justice Dept"

By Carl Messineo and Mara Verheyden-Hilliard

Rather than dismantling the NSA’s unconstitutional mass surveillance programs, or even substantially restraining them, President Obama today has issued his endorsement of them. What are billed as ‘reforms’ are mere window dressing, cosmetic changes that leave this unconstitutional system intact and, in fact, provide presidential ratification.

Today's speech full of minimization and outright denial regarding the now-documented massive scope of NSA spying on the population served as the presidential announcement of an intention to permanently implement a national surveillance grid and indiscriminate mass data collection. Every keystroke will still be captured, every phone call will still be logged.

The creation of a panel of advocates to purportedly represent privacy interests in the Foreign Intelligence Surveillance Court and to seek that secret Court’s approval regarding Section 215 queries is a costume of constitutionality, but not Due Process.

The FISC lacks all the characteristics of a genuine court, in which there is openness, public opinions, due process and an adversarial process. The ‘advocate’ proposal is simply a cosmetic attempt to make up an appearance, without substance, of an adversarial proceeding. Seeking 215 approvals from this court in no way meets the constitutional requirements of a warrant.

The speech today was ‘historic’ in the worst sense. It represents a historic failure by a president to reign in mass government illegality and violations of fundamental rights.In the 1920s and again in the 1970s, revelations of secret mass surveillance programs led to popular outrage and forced presidents to curtail the unconstitutional activities of intelligence agencies. In this case, rather than the pendulum swinging back towards respecting privacy and the Constitution, President Obama has validated mass surveillance and completely sided with the NSA.

President Obama’s speech was intended to stop the firestorm of public outrage at his government’s mass surveillance operation. Using tactics of misdirection, the president has tried to reframe the issue as who should house the massive collection of data on law-abiding people, rather than the real issue, which is that this massive indiscriminate collection and warehousing of data must stop. This speech will fail to stop the tide of opposition of people in the United States and around the world who reject living under a Surveillance State.

Today’s speech demonstrates that President Obama either lacks the courage or desire to stand up to a military intelligence agency that has acted illegally and in secret, and has aggregated unseemly and dangerous power to monitor the communications of an entire people, break-in to their property, and hijack and destroy their cherished rights to be free people.

President Obama should have announced the end to the NSA’s program that collects information on billions, if not trillions, of U.S. telephone calls and emails of law-abiding citizens of this country and others around the world.

He should have acknowledged the unconstitutionality of the NSA’s program of massive data warehousing of the online communications and transactions of law-abiding citizens, for whom there is no suspicion of criminal wrongdoing.

He should have required intelligence agencies to obtain judicial orders before issuing demands to private companies for individuals’ financial and telecommunications records.  He should have ended dragnet surveillance and bulk data collection.

He did nothing of the sort.

A former constitutional law professor, Obama did not acknowledge that our basic rights include the Fourth Amendment right to be secure in our personal effects against collections and searches in the absence of probable cause. Standing at the Department of Justice, whose attorneys have crafted secret interpretations to justify blatantly unconstitutional government conduct, he endorsed the continuation of these widespread abuses.

President Obama also did not announce the release of judicial interpretations that come from the FISC. As such, he leaves in place a structure that essentially creates law entirely in secret, without public knowledge or debate.

The constituencies to whom Obama seems to be most responsive are not the People of the United States, but foreign allied governments and the major telecommunications corporations. These companies did not want to serve as the government’s data warehouses, as proposed by Obama’s review panel, because it would be bad for business and their public image. Neither the corporations nor the government should be allowed to collect and retain this mass surveillance data.

President Obama has only spoken now, over half a year after whistle-blower Edward Snowden disclosed the shocking scope of the NSA’s spying programs, because of the growing political crisis these revelations have caused.

The president has decided that a top “reform” inside the NSA in the wake of Edward Snowden’s courageous revelations is to prevent other Snowdens from coming forward. By criminalizing, threatening and outrageously punishing whistle-blowers, the administration has hoped to stop the American people from learning the truth about the government’s action. But, there are millions of people who have a conscience and it is impossible to stop each and every one from acting on it.

This fight to stop the Surveillance State is just in the beginning stage. The outcome will determine the fate of democracy in the United States.

It is evident that the pressure of the people is coming to bear. The only reason that President Obama gave his speech today was because he was forced to by the revelations by Edward Snowden and the mass grassroots movement that has been ignited following those revelations. We are intensifying our legal work as well as the mobilization of people through the Thank You Ed Snowden campaign in the United States and around the world to demand an end to the Surveillance State.

Please continue to show your support for this critical effort.