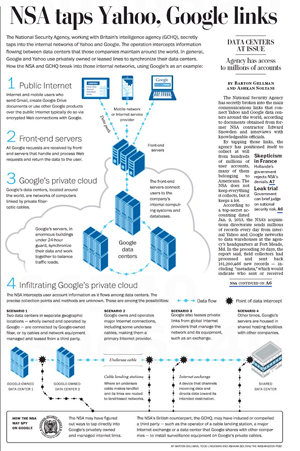 With each passing day, we are learning more about how far the U.S. government and its intelligence agencies have gone to collect surveillance on the people of this country and the world. All these critical revelations can be linked to the whistle-blower Edward Snowden.

If you sent a letter previously, send another one today. We have to keep the pressure up.

The surveillance apparatus is so out of control that this issue requires more than the tweaking or amendment of existing legislation.

One leaked document revealed that the NSA was taking in 180 million records per month by directly tapping into the fiber optic cables of the two telecommunications company. This collection is on top of the earlier revelations that the NSA Prism program was collecting the "metadata" of essentially every email and phone call in the country.

The New York Times quoted a networking expert who suggested the NSA could have, like a high-tech thief in the night, physically inserted devices in or onto the cables.

Throughout this whole scandal, the NSA has repeatedly lied to Congress and the American people. Now is the time to act.