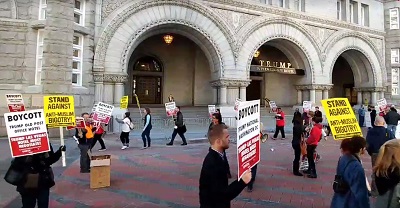 Newly released documents from the General Services Administration (GSA) obtained by the Partnership for Civil Justice Fund through a public records request and lawsuit provide new insight into Donald Trump's repeated claims about the success of the Trump International Hotel in Washington, D.C.

Spirited protests forced Trump to cancel his planned outdoor ribbon cutting photo-op at the front of the hotel on Pennsylvania Avenue today after he was unsuccessful in his behind-the-scenes efforts to keep demonstrations across the street. He moved the stage-managed show indoors.

Inside, away from the sight and sound of protests out front, Trump once again proclaimed that his hotel was "dramatically ahead of schedule,” as the chief executive of Trump Hotels claimed business “continues to exceed our expectations.” Mickael Damelincourt, the hotel's managing director, previously told NBC News that "the opening of Trump International Hotel, Washington, D.C., has been the most successful in terms of opening bookings."

What the GSA Documents Show

The General Services Administration (GSA) released to the PCJF a tiny set of 40 pages in response to the records demands at issue in litigation (apparently continuing to withhold requested material).

Email exchanges among GSA officials the weekend before the originally scheduled opening on September 12 state that the Trump Hotel people "have been somewhat behind the construction schedule that they had provided to us. So as we sit here two days before the opening of the hotel we had [sic] still have not issued a certificate of occupancy."

The documents also reveal that while Trump and his organization were touting the interest in the hotel, that had apparently not translated to actual bookings. For its much touted opening to guests in September, the 263-room hotel was two thirds empty with only "80+" guests booking rooms.

The documents show that multiple employees of the GSA were communicating over the weekend before the Monday, September 12 opening of the Trump Hotel and that just hours before the first guests were scheduled to arrive, the Hotel had still not completed its work or required inspections and safety tests and as such did not have a Certificate of Occupancy despite its looming Monday opening. In fact, the hotel was significantly enough behind that even if it completed certain identified work by the Monday opening, it would only receive a Temporary Certificate of Occupancy. The records end without any indication of when or whether the final Certificate of Occupancy did issue.

The documents have been publicly posted here.

Earlier this year, Trump announced that the hotel’s opening would be in September, “dramatically ahead of schedule.” Failing to meet that schedule with unfinished construction the Trump Organization changed the opening just weeks in advance to call it a “soft opening,” and said it would have another opening at the end of October. These documents provide a behind-the-scenes look at Trump’s failure to meet his first scheduled opening, and the lack of interest in bookings for that long advertised event.

The Partnership for Civil Justice Fund has gone to court in Freedom of Information Act litigation regarding the “deals” reached by federal and District of Columbia officials with the Trump Organization for its new hotel in D.C. that appear to privatize portions of Pennsylvania Avenue parkland, one of the country's most historically significant sites for free speech and public assembly.