by Sarah Lazare
Nov. 14, 2017
reprinted from The Intercept 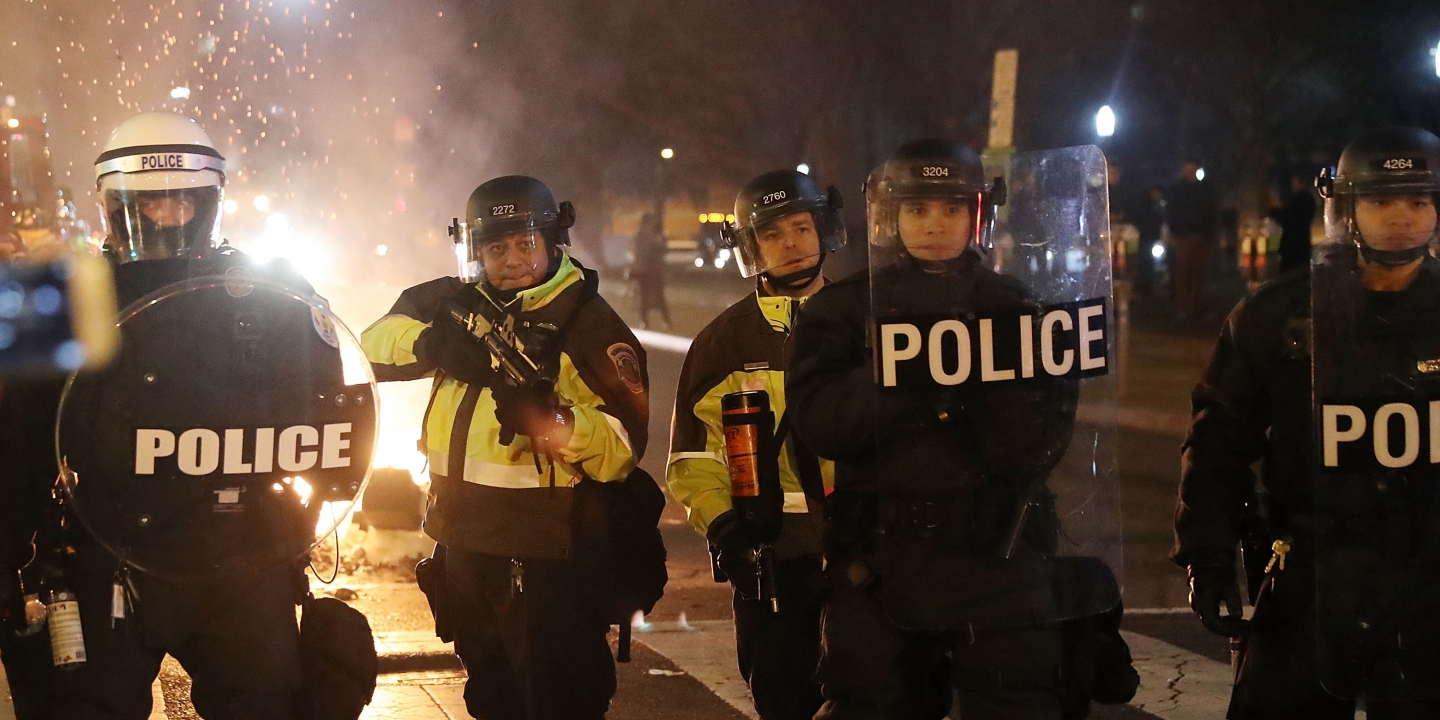 A consultant paid by the Washington, D.C., City Council to investigate the Metropolitan Police Department’s crackdown on Inauguration Day protesters is coming under scrutiny for what activists and experts say is a bias in favor of police. The Police Foundation, the purportedly independent group conducting the investigation for the city, is poring over charges of police abuses from January 20.

The city’s police department faced scrutiny for violence and arrests that targeted anyone in close proximity to an anti-fascist demonstration, part of a thousands-strong “Disrupt J20” protest against Donald Trump’s presidential inauguration. Demonstrators were allegedly confronted with arbitrary mass arrests and sexual assault, according a lawsuit filed against D.C. and the police. The lawsuit said those in and around the protest came under attack from chemical agents, such as pepper spray, as well as rubber bullets and stinger grenades. Following the mass arrests, hundreds of people were charged with conspiracy, property destruction, and assault, and now many face decades in prison. Defense attorneys say the mass prosecution is unprecedented in Washington, D.C.

The police’s actions on January 20 quickly provoked concern. The Washington, D.C., Office of Police Complaints, overseen by the mayor, reviewed the police’s approach on January 20 and released its findings in a February report. The office acknowledged that the Metropolitan Police Department may have violated its own policies and called for an “independent consultant” to investigate police actions. That’s where the Police Foundation — which is run by retired Redlands, California, Police Chief Jim Bueermann — came into the picture.

Michael Tobin, executive director of the Office of Police Complaints and a former Milwaukee police officer, told The Intercept that the city council allocated $150,000 to hire the Police Foundation. Tobin sought to justify Bueermann’s independence by arguing the Police Foundation head did not serve in D.C. law enforcement but had experience in police work elsewhere. “I think that it could be an advantage to have someone with prior police experience to review police procedures,” Tobin said.

For some critics of the Police Foundation, however, whether someone served in a far-off police department is of little importance. The Police Foundation “is extremely tied in with police departments and with police leadership, as well as police officials who retire and go into the very lucrative business of police consulting,” said Mara Verheyden-Hilliard, a constitutional lawyer and executive director of the Partnership for Civil Justice Fund, which filed a lawsuit in March charging that D.C. police are unlawfully denying public records requests related to Inauguration Day. “We believe that, for there to be a truly independent investigation, it would need to be through an entity that has no ties to police departments, police officials, or former police officials.”

Defendants in the J20 trials and their supporters said the Police Foundation’s role in investigating police misconduct stood as yet another sign that the state is trying to dodge accountability. On Inauguration Day, the D.C. police surrounded and arrested more than 200 people, among them medics, legal observers, and journalists, according to Defend J20 Resistance, a group of defendants and their supporters. While no one disputes that windows were smashed during the protest, individuals were held and charged en masse for the same broken windows. More than 190 of those caught in the sweep will soon head to trial, with the first starting November 15, and many facing decades-long prison sentences, according to Sam Menefee-Libey of DC Legal Posse, which is providing support for defendants..

The D.C. police declined to comment for this article, and the Police Foundation did not respond to a request for comment.

That the Police Foundation, a group with close ties to police, was proffered as an independent investigator of police abuses captures why protesters rose up against the incoming Trump administration in the first place, said some defendants in the trials stemming from the J20 protests.

“Everyone stood up to Trump and his administration in the belief he represented more policing, more militarization of marginalized communities,” Dylan Petrohilos, a defendant in the Inauguration Day case, told The Intercept. “Now, the MPD’s violence against us is being investigated by a PR firm for the police.”

Founded in 1970, the Police Foundation works closely with police, rather than as an independent auditor of their policies, to do “research.” “The purpose of the Police Foundation is to help the police be more effective in doing their job,” says the group’s website. “To accomplish our mission, we work closely with police officers and police agencies across the country, and it is in their hard work and contributions that our accomplishments are rooted.”

This is not the first time the Police Foundation’s findings have been called into question because of its closeness to police departments.

At an October hearing, Charlotte, North Carolina, politicians and residents criticized a draft report by the Police Foundation that found local cops “acted appropriately and in line with their policies and procedures” during a September 2016 response to protests against a police killing of an African-American man. National guard troops and police orchestrated a heavy crackdown on the protests.

Funded by the city in November 2016 for roughly $380,000, the Police Foundation report paints the Charlotte-Mecklenburg Police Department’s actions in a positive light, depicting cops as acting on the defensive against protesters. The report insinuates that outside agitators played a key role in the demonstrations. “The issues and tension also created an opportunity that activists from outside the city leveraged to further their national agenda and to cause chaos and destruction in Charlotte,” the Police Foundation report states.

Jamie Marsicano, an organizer with the Charlotte Uprising, responded with incredulity. “When I think of who came from the outside, I think of how the police from all over the state and the national guard was deployed to occupy our city,” she told The Intercept.

Ash Williams, an organizer with Charlotte Uprising, dismissed the findings. “When police investigate themselves,” Williams said, “they are going to find they didn’t do anything wrong.”

Charlotte is not the only city where the Police Foundation has become involved in disputes between local communities and the police — and where the foundation sided with the police’s views on the disputes.

The Police Foundation released a report in January defending a secretive, dragnet aerial surveillance Baltimore Police Department program; collaborated this year with the Department of Justice to produce a study that took a sympathetic view of the Minneapolis Police Department for its crackdown on a 2015 Black Lives Matter protest; and defended some instances of a controversial policing tactic known as “stop-and-frisk,” which studies have shown escalates racial profiling.

Amid the 2014 Ferguson, Missouri, protests, Bueermann, head of the Police Foundation, testified before the Senate Committee on Homeland Security and Governmental Affairs to defend a federal program that distributes U.S. military equipment to police departments across the country, though he called for public accountability for how the equipment is used.

Bueermann is open with his donors about the foundation’s loyalties. In a 2016 fundraising appeal, he wrote, “The Police Foundation is honored to serve and support these leaders and the many outstanding men and women who form the thin blue line that separates good from evil, trust from betrayal, and honor from dishonor.”

For some critics of the police, the Police Foundation’s record and its professed closeness with police departments and even the ethos of police officers shows their bias — revealing the persistent problem of unchecked police power. “We’ve left police to their own rule, to carry out their own investigations, part of creating an unaccountable institution of policing,” said Alex Vitale, a professor of sociology at Brooklyn College and author of “The End of Policing.”

For some supporters of the J20 defendants, the fact that police conduct is being subjected to a probe — no matter how biased — should throw the entire prosecution into question. Kris Hermes, who is providing legal support for the J20 defendants, told The Intercept, “It’s really disturbing that, even though there’s a pending investigation of the D.C. police for questionable arrests and misconduct on Inauguration Day, protesters and others are nonetheless about to be tried by the Trump administration in less than two weeks.”