by Steven Nelson
Nov 11, 2017
reprinted from the Washington Examiner 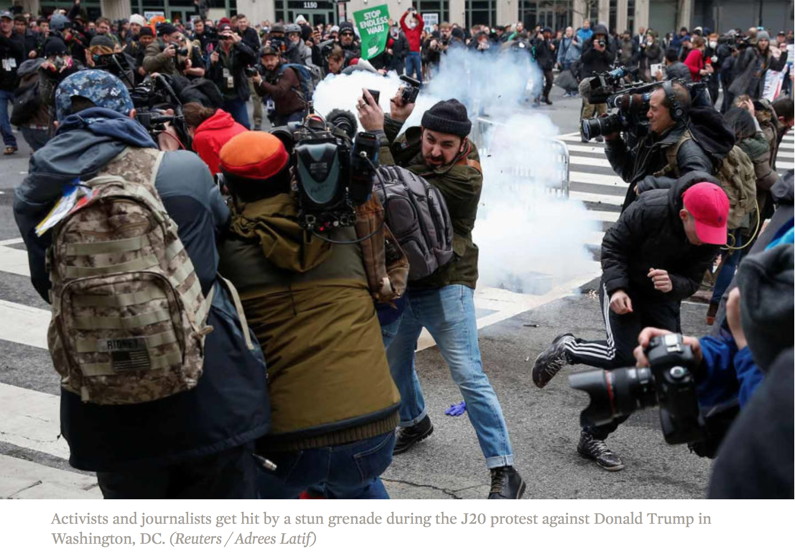 Seven people mass-arrested during President Trump’s inauguration in January stand trial next week in a major test for prosecutors who charged more than 200 people with felonies that could carry decades in prison.

The first group of inauguration defendants includes independent journalist Alexei Wood, who broadcast to Facebook the anti-capitalism march that police chased through city streets north of the inaugural parade route.

Jury selection is scheduled for Wednesday, with opening statements possible the next day. The trial could last more than a month.

Critics say prosecutors’ case rests on collective guilt for the actions of a small group of vandals, and that the stakes are high in an era when protests again are well-attended.

“This was a mass dragnet arrest that’s devoid of probable cause … they are holding people responsible for the actions of other people,” said Mara Verhayden-Hillard, an attorney who won settlements for protesters mass-arrested in the early 2000s.

“It’s evident that the U.S. Attorney’s Office under the Trump administration, working with the D.C. police department, are eager to send a very dangerous and threatening message to anyone who participates in protest activity: that they may be facing decades in prison, not for any unlawful action for their own, but for being near someone else,” Verhayden-Hillard said.

The defendants face five felony destruction of property charges and a felony riot-incitement charge that carry up to 10 years in prison each, as well as two misdemeanors — rioting and conspiracy to riot — that carry 180 days each. Actual sentences likely would be less severe.

Convictions would send a shudder through 187 other defendants scheduled to stand trial.

Although prosecutors have identified a number of alleged “breakers” who committed property damage, Wood’s defense attorney Brett Cohen said nobody in the initial group is alleged to have committed vandalism or violence. The property destruction charges instead hinge on the conspiracy charge. More than 50 witnesses are anticipated, many of them police officers.

Trials may clarify how many vandals actually were caught. As police surrounded marchers, a large group of the most aggressive participants linked arms, counted down from 10 and charged through a police line. Hours later, black-clad activists hurled bricks at police and set a limo on fire. Most if not all of these individuals never faced charges.

The use of felony charges by prosecutors came as a largely unsuccessful effort to force plea deals to a single charge of misdemeanor rioting in exchange for unsupervised probation, community service and a fine.

Only 19 people took plea deals, according to information from the U.S. attorney’s office. Dane Powell, who was arrested later in the day for throwing a projectile at police, also pleaded guilty to assaulting police and was sentenced to four months in prison.

Wood, who has an interest in conflict photography, told the Washington Examiner he feels confident going into the trial.

“I am a journalist, and I was documenting protests against the Trump regime,” Wood said. “I feel righteous in my innocence.”

It’s unclear why some people claiming journalistic protection were excused from prosecution while others, such as Wood and Aaron Cantu, a freelance journalist published by The Nation and The Intercept who now works at the Santa Fe Reporter, did not have charges dropped.

About an hour after the march ended, police allowed journalists from NBC and U.S. News & World Report to leave without arrest, but took others, including from RT and Vocativ, to jail and initially charged them.

Prosecutors dropped charges against many journalists and photographers, including anarchist photographer Shay Horse and livestream videographer Matt Hopard, who worked with attorneys to show they had a history of similar coverage.

Bill Miller, a spokesman for the U.S. attorney’s office, declined to comment on why Wood and Cantu were not excused from the prosecution.

Wood’s video, which will be played at the trial, shows he did not personally commit any act of vandalism or violence as he narrated happenings.

At some points, however, Wood does enthusiastically say “woohoo,” including when others smash the windows of cars and a McDonald’s. But it’s unclear if he was endorsing the crimes. He made similar enthusiastic utterances when police fired flash-bang grenades at the crowd.

“This is the fucking Seattle ‘99 that I missed. … I’m fucking blissed out,” Wood filmed himself saying as marchers retreated from police.

Cohen, Wood’s attorney, said he views the most challenging part of his case as being a pretrial hearing Tuesday about jury instructions for the crime of inciting a riot. At the trial, he expects to stress First Amendment issues and the evolving nature of journalism.

“Whereas everyone else has a ‘Where’s Waldo?’ trial, my client was out there livestreaming,” Cohen said, making his case unique.

Attorneys for the other six initial defendants either did not respond to inquiries or declined to comment.

The trial may shed light on who actually ordered the arrests. D.C. Police Chief Peter Newsham has declined to discuss his involvement, citing litigation, but before becoming chief he was held personally liable for violating the rights of about 400 people mass-arrested in a D.C. park in 2002 after sporadic acts of property damage during World Bank protests. They were arrested for failure to disperse, but no dispersal order was given. Authorities settled lawsuits for about $17 million, with the final plaintiffs – four students journalists – winning about $115,000 each.

No warning or opportunity to disperse was given before the inauguration arrests, but because activists are charged with rioting, one might not be needed.

In 2009, a panel of the U.S. Court of Appeals for the D.C. Circuit found police may not need to give a dispersal order before making arrests for rioting, and that they are not civilly liable if they could show that the crowd was “substantially infected with violence” and that "officers had reasonable grounds to believe that everyone arrested was part of the rioting group." That case was brought by people arrested as a crowd cheered acts of vandalism on the night of President George W. Bush’s 2005 inauguration. Its relevance is disputed by some civil libertarians.

Verheyden-Hilliard, executive director of the Partnership For Civil Justice Fund, said she views the first case as a bell-weather. Convictions and imprisonment of protesters would make others more likely to plead guilty, she said.

“They’re hoping that by conviction they can exonerate themselves from liability for what was unconstitutional conduct,” she said.