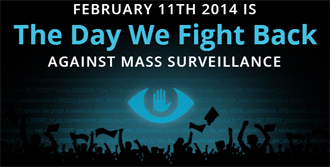 The Day We Fight Back campaign, which is using the above image, is sponsored by a wide array of civil rights and civil liberties organizations.

February 11 is "The Day We Fight Back," a day of nationally coordinated action against dragnet surveillance that promises to be the largest in history. A broad range of civil liberties organizations are participating.

The Partnership for Civil Justice Fund is encouraging all of its supporters to help this cause go viral tomorrow. That means sending thousands and thousands of letters to Congress, sharing information about the day on Facebook, Twitter and other social media, and communicating with your friends and family members about it.

Everyone knows that the Pentagon and the NSA are powerful. But we have a source of power that they do not: the will of the people. There are not millions of people out there who are demanding more invasions of their privacy, and more government collection of their personal associations, communications and movements.

But there are millions who do want such programs to end and who are ready to take action, and there are many more people who just need to learn the truth about the NSA's illegality.

Our message to Congress is clear:

The Pentagon's NSA mass surveillance program is both unconstitutional and ineffective.

There is no way to "remedy" these programs of bulk data collection and mass surveillance. They need to be brought to an end.

The spirit of the people only becomes a real force in society when it is mobilized. That is why it is imperative you send a letter to Congress, and tell your friends to also send their letters as well.

February 11 is The Day We Fight Back. Please do your part in making history.