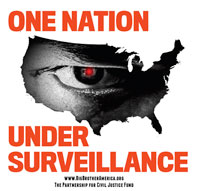 Never has it been more urgent for people around the country to take action to end the government’s mass surveillance against the people.

Most people are not aware that silently, but constantly, the government is now watching, recording your everyday travels and storing years of your activities in massive data warehouses that can be quickly “mined” to find out when and where you have been, whom you’ve visited, meetings you’ve attended, and activities you’ve taken part in. This is all done by using an elaborate network of Automatic License Plate Recognition cameras, also known as tag readers.

The Partnership for Civil Justice Fund has spent years investigating and uncovering this mass surveillance grid that is being put in place in the United States in the absence of public awareness, scrutiny, debate or oversight.

It’s a system of mass surveillance and data warehousing on law-abiding persons and citizens. You’re being tracked routinely, without probable cause, without a warrant and without even a suspicion that you have committed a crime.

The public has a right to know about this program and to stop it. The PCJF has established a national campaign, One Nation Under Surveillance, with a proactive website providing the tools and information you can use to take action now.

ALPR is a technology of social control. And it’s not just critics who call it so. The International Association of Chiefs of Police, which itself favors tag readers, acknowledged in a report “The potential privacy harm of surveillance is its potential use as a tool of social control.”

At our campaign site, www.BigBrotherAmerica.org, you can:

Originally developed by the United Kingdom to be used against the Irish Republican Army, later deployed by the U.S. in Baghdad, tag readers have now been adapted for routine and massive deployment against civilians in the U.S.

Tag readers are physical cameras that can be stationary, mounted on traffic poles, gates or bridges, hidden in white and orange traffic barrels, or disguised in roof-mounted taxi-signs. A tag reader captures thousands of license plates per minute, day or night and records the date, time, photo of the vehicle and possibly occupants, its immediate area and GPS coordinates.

The federal government has spent millions of dollars outfitting local law enforcement, from big cities, to the smallest towns with tag reader systems. Using the pretext of drug interdiction and border enforcement, the federal government has installed its own network of cameras that has grown and continues to grow well past the borders throughout the U.S. The Department of Homeland Security has created customized software to integrate the surveillance data obtained through all the different vendor systems that are on the market and used by different localities. The federal government has a massive datastorage center for tag reader information located in Northern Virginia.

Read more about tag readers in PCJF’s first article in a new series.

With a plate and a cross-reference to other databases (like the Department of Motor Vehicles, credit card companies and phone records) a full profile about you can easily be created through electronic and computer data. The fusion of license plate reader data with commercial databases and intelligence databases gives the government virtually unlimited knowledge of our activities and associations.

Working together we can halt this operation. With exposure and concerted public opposition, this program can be stopped.