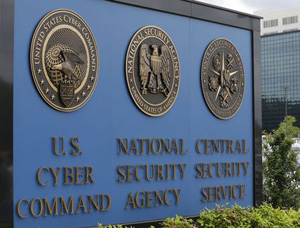 Winston Smith, the protagonist in Orwell’s dystopian novel 1984 spent much of his time writing in his diary in the one corner of his flat which the Government’s mass surveillance technologies could not reach. It was his only vestige of privacy from government spying.

The NSA intends to deny each of us even a corner of privacy where our intimate communications, personal and political associations and transactions cannot be scooped up and warehoused systematically by government technology.

Today The Guardian and the New York Times report that U.S. and British intelligence have, covertly and/or with the approval of Internet and technology companies, inserted secret vulnerabilities or “back doors” into the encryption software we use every day. The financial scope of this operation code-named “Bull Run” is over 10 times that which is expended on the notorious PRISM domestic spying program. The documents establishing this come from disclosures made by whistleblower Edward Snowden.

The target of this and related programs? Outlook.com, Skype, Hotmail, Google, Yahoo, Facebook. The intent is to subvert every form of commercial encryption, the encryption algorithms used to transmit and protect your banking transactions, to store medical information, Virtual private Networks (VPNs), and more.

Now that Ed Snowden’s relevations have exposed the truth about the NSA’s systematic use of “back door” technologies we must demand that Congress hold fully open, nationally televised debates and introduce legislation that prohibits this conduct.

This practice should be made illegal and NSA officials officials should be made culpable for secretly undermining our core privacy rights and the integrity of the Internet, which has become the backbone of our digitized lives.

Of course, the scanning and warehousing of this data is an unconstitutional violation of law abiding persons' rights, as well as a near-complete negation of privacy.

But the violation is even more severe than the extraordinary loss of privacy and civil liberties.

The application of these technologies, which ultimately are tools of social and political control, will be against domestic dissent.

Only a plainly incompetent “terrorist” would use Gmail for nefarious and secret communications. Who relies on this? We do. All of us do. It is our communications which are universally swept up, collected, scanned and warehoused for data mining now or in the future.

Reflecting this past week on the 50th anniversary of Dr. Martin Luther King’s historic “I Have a Dream” speech, one must also remember how after the 1963 March on Washington for Jobs and Freedom, Dr. King was targeted in the U.S. Government’s COINTELPRO operations, which used intelligence and surveillance technologies of the day (as well as infiltration and violence) to disrupt and subvert lawful peaceful political organizing of the civil rights and anti-war movements. These programs coincided with an effort to collaborate across the intelligence agencies, including the NSA and the FBI, to use their resources for this purpose.

From the “late 1963” until his death in 1968, Martin Luther King, Jr. was the target of an intensive campaign by the Federal Bureau of Investigation to “neutralize” him as an effective civil rights leader. In the words of the man in charge of the FBI’s “war” against Dr. King, “No holds were barred.”

The FBI gathered information about Dr. King’s plans and activities through an extensive surveillance program, employing nearly every intelligence gathering technique at the Bureau’s disposal in order to obtain information about the “private activities of Dr. King and his advisors” to use to “completely discredit” them.

-        - Final Report of the Select Committee to Study Governmental Operations With Respect To Intelligence Activities, U.S. Senate Report No. 94 – 755, Book II at page 11.

Dr. King faced this comprehensive attack and yet the civil rights movement prevailed because millions of people joined together and their collective action became an irresistible force that re-shaped the country forever.

We must all recognize that if this massive spying and surveillance program by the government is not dismantled it will be used by the government precisely against future progressive movements like those led by Dr. King.

These technologies are being secretly deployed against our society and our people. Now that they have become exposed they insist that programs were designed to keep us safe.

America needed the movement led by Dr. King and today it needs a movement to dismantle the surveillance state.

We are building a new social movement for justice and personal freedom right now. If millions of people come together now – as they did in the 1950’s and 60’s – we can take back our country from those who are using the latest technologies to end our individual freedoms and our democracy.

While Dr. King’s movement won the 1964 Civil Rights Act and other far reaching legislation in spite of the FBI’s campaign against him we know too that some things have not changed. The Partnership for Civil Justice Fund’s public records demands have shown how the federal government and local authorities worked together to surveil and infiltrate and crackdown on the Occupy movement, then a developing movement which asserted goals of challenging the economic status quo and creating a more equitable and improved society.

Any protest organizer and many protesters over the past decade have first hand experience, knowing that it has been the Joint Terrorism Task Forces and now the Fusion Centers, all of which are justified with reference to anti-terrorism goals, that are used to surveil, infiltrate and disrupt peaceful protest and dissent.

No matter how often the government invoked terrorism as the justification for its systematic domestic and worldwide spying programs, the reality is that the data that is captured is all of ours - - our most intimate and personal and political communications and associations and activities. These tools - - regardless of justification - - will be used against those who seek to create change within society, those who dissent - - on the right and on the left - - and who are perceived to be “adversaries” of the status quo.

This is an inversion of democracy. The power to decide and to determine, and to engage in political and democratic action, rests with the people. Here, the people have been denied even knowledge of the scope of these intrusive programs. The debate that is happening now is opening because of increased consciousness catalyzed in substantial part by the disclosures of whistleblowers including Edward Snowden.

Our job now is to use this information, to secure more disclosures through public records demands such as those advanced by the PCJF, and for us as the people to determine the course of the nation, and the direction of democracy. Future generations rely on us to act now.